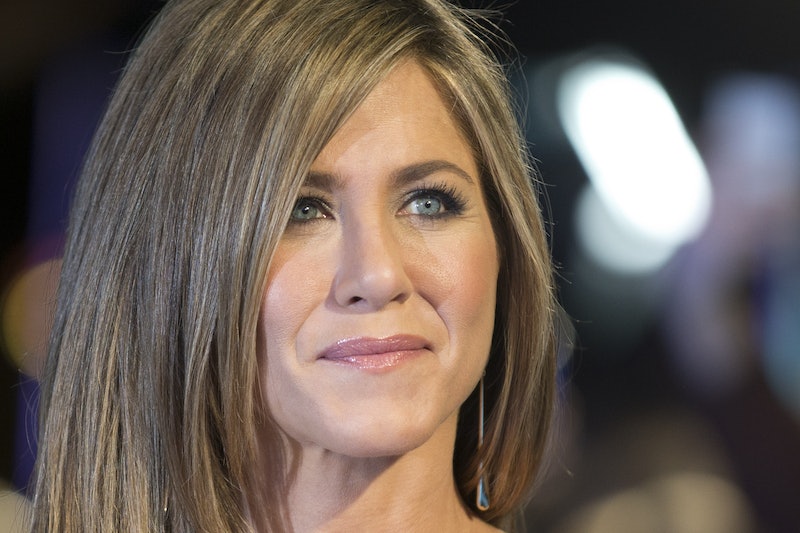 You might be sick of hearing about this, but when Jennifer Aniston continues to handle her Oscar snub with such class and grace, it's hard to not talk about it. On Monday, Aniston chatted with Ellen DeGeneres about not receiving an Oscar nomination for her role in Cake. Of course, Aniston looked at it positively and even joked about it, because, yeah, she's that amazing. DeGeneres told her bestie Aniston that she was "shocked" she didn't get recognized, but Aniston put everything into perspective,

Yeah. I'm the number one snubbed! That's the silver lining.

If you think about it, that's absolutely true. When it comes to getting snubbed, Aniston is the go-to snub woman. What's even more impressive, which Aniston also discussed with DeGeneres, is the fact that she and the film have received so much love and it hasn't even been released! That's a true honor for Aniston, in addition to others who have reached out thanking the actress for her performance. She told DeGeneres,

What's been so incredible is the amount of people that have come out to me who are suffering with chronic pain and in this same situation. It's unbelievable how much positivity it's bringing to those who are kind of silently suffering. I think it's a beautiful, hopeful movie.

Again, Aniston is looking at the sunny side of life. Previously, she spoke with Access Hollywood, and said, again, with sophistication,

I’d be lying if there wasn’t a little [aw], but after that there’s a lot of, "but look at tonight, look at the Globes, look at the SAGs!" We’re an embarrassment of wonderful riches [for] a movie that hasn’t even been released and is teensy tiny. This is all just cherries on top of something that was really special to us. So we’re really excited.

Can we just give Aniston an Oscar for her handling her snub so beautifully?