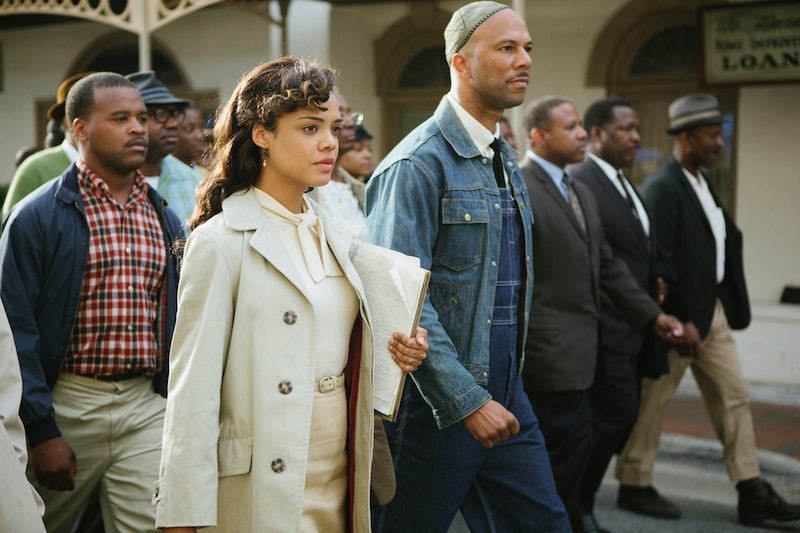 There’s plenty to lament about this year’s Academy Awards. The omission of Selma director Ava DuVernay from the Best Director category and star David Oyelowo from Best Actor calls to the forefront the movie business’ malignant attitude toward stories about, by, and featuring black men and women. The Screenwriting categories’ lapsed recognition of the year’s many terrific female-written scripts — Gone Girl ranking high — likewise emanates the chauvinism coursing through Hollywood’s blood. And the uncanny celebration of American Sniper speaks volumes about the industry’s, and the country’s, diluted perspectives about the Middle East. But we can lament all we want; at least this year’s Oscars feels revelant.

Both through its inclusions and its high profile rejections, the 87th Annual Academy Awards feels like the most contextually pressing in ages. Representing a year saturated to the brink with volatile conversation, the forthcoming Oscars seems to have established footing in all areas of necessary discussion.

With its dismissal of Selma as a candidate in the aforementioned supplementary categories, the prospect of the film nabbing the night’s top honor (be it, though, a slim one) makes for a Best Picture race riddled with important implications. But it isn’t only the grand finale that’ll be steeped in talking points of substance: everything from Best Actress to Best Adapted Screenplay to Best Documentary to, yes, Best Animated Feature contributes something to the many voluminous conversations of and extending beyond 2014.

The perseverance of racism in not only American culture but in the country’s judicial system stands as, by far, the most prominent sociopolitical issue of the past year. Following the nation’s witness of two grand jury dismissals of cases of potential homicide — one deemed all but legally so by medical examiners — of black men by police officers, the asymmetry surrounding the racial divide under the jurisdiction of U.S. law became a travesty we could no longer overlook.

Selma, filmmaker DuVernay’s illustration of Martin Luther King Jr.’s 1965 protests of the discriminatory policies of Alabama local government, rings colossally familiar to the contemporary state of affairs. The film’s participation in the Best Picture race adorns the top tier competition with unavoidable asides about our today’s condition, especially when considered in company with the Academy’s own negligence to recognize the beautifully crafted and expertly headlined movie among its Best Director and Best Actor nominees.

It’s a subtler count of inequity than those documented in Selma or witnessed on the national news toward the end of 2014, but one nonetheless evident of a world in which the powers that be — be they grand juries or film organizations — don’t hold black parties in the same regard as white.

Just as regrettable as Selma’s across-the-boards snubs is the Best Adapted Screenplay category’s omission of Gone Girl, written for the screen by source text author Gillian Flynn. Even before Gone Girl was passed up for a writing nomination, however, was it steeped in controversy.

The story traipses into the territory of #YesAllWomen, a digital movement meant to highlight the ubiquity of sexism in the American day-to-day. Decried by some as a detractor to the sentiments of the #YesAllWomen message and championed by others as a proponent thereof, the film inspired more socially conscious think pieces than almost any other work of fiction to materialize in 2014.

Continuing the above mentioned conversation about police brutality, we have Inherent Vice, which transplants the issue to a satirical lens and replaces constructs of race with those of political alignment.

In fact, Inherent Vice is dense with commentary about the disharmony between the liberal left and the conservative right, transcending the applications of those labels circa the film’s 1970s setting to speak just as clearly about the toxicity of the present's ideological dichotomy.

Laura Poitras' long awaited Edward Snowden documentary is perhaps the most enlightening movie to hit theaters in 2014, revealing for the first time the full extent of the government's implicitness in the wire-tapping and demolition of privacy of the American public.

The Boxtrolls and the Israeli-Palestinian Conflict

Okay, this one requires some more imagination, but the latest Laika picture might actually have a few things to say about the nature of conflict between warring nations (particularly those inhabiting the same land), as well as the nature of propaganda and unfounded allegiances.

As you can see, peering from every corner of this year's Academy Awards are issues of social import and high-priority discussion. Could this be the year when the Oscars actually breaks its out-of-touch habits and becomes, dare we say it, relevant?