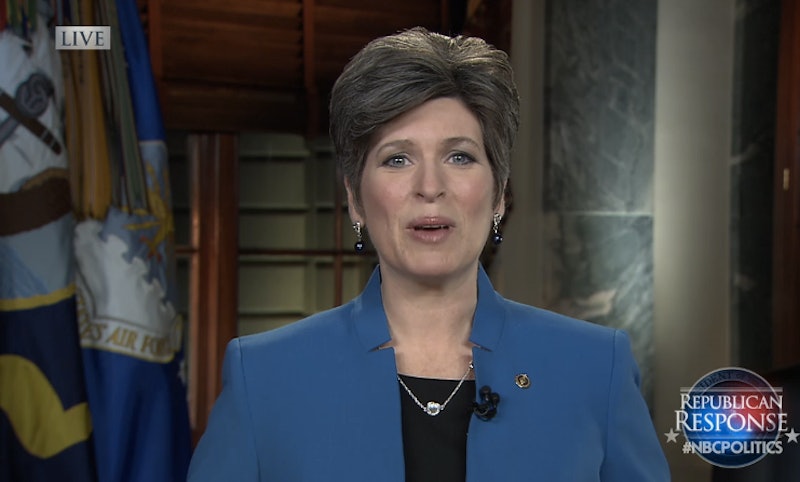 Look guys, public speaking is hard. We all get a little bit nervous in front of audiences, and when that audience is the entirety of the United States, there is, understandably, a lot of pressure. So maybe we can cut our politicians a little bit of slack when they botch their speeches, but when it comes to Joni Ernst's response to the State of the Union, a little bit of slack just won't cut it — she needed everything to just go limp. (Maybe that would've made her speech a little less wooden.) Of course, we weren't sure what to expect from the freshman senator from Iowa (who first became famous for castrating hogs). But we definitely could not have anticipated her emphasis on bread bag shoes and her biscuit-making experience at Hardee's.

Sen. Ernst, I've just gotta say it — that response was not great. But in your defense, the GOP seems to be suffering from a State of the Union address curse of some sort. In fact, none of the last six Republicans who have been tasked with the difficult follow-up speech have fared well — after all, one will soon be making friends in prison. (Best of luck to you, former Virginia Governor Bob McDonnell.) Here's a rather un-fond walk down memory lane, and a revisitation of the graves of bad GOP responses (and political careers) past.

The Inception Of The Curse — Bobby Jindal

The terrible trend began in 2009 when Louisiana Governor Bobby Jindal, who was then considered a rising star in the Republican Party, gave a phenomenally uninspiring speech that was universally panned as one of the worst responses to a State of the Union address in recent memory. He was described as "over-coached and over-rehearsed" by CNN Senior Political Correspondent Candy Crowley, and on Twitter, conservative columnist Amanda Carpenter proclaimed, "Some conservative needs to start a campaign to fire whoever wrote this cheesy response and coached him to talk like this. I can't watch."

Apparently, much of Jindal's state agreed with Crowley and Carpenter, and his gubernatorial approval ratings have since plummeted. His political career, once considered to be moving along an upward trajectory, has, at best, stagnated.

Maybe there was nothing terribly wrong with then-Virginia Governor Bob McDonnell's 2010 response to Obama's annual speech, but you know what is terribly wrong? Corruption.

The former governor was recently convicted of no fewer than 11 counts of corruption, and subsequently sentenced to prison — a very different sort of "big house" from the governor's mansion to which he and his wife had become accustomed.

Not Much Better — Paul Ryan

The GOP tried a different tactic with Tea Party darling (and economic whiz kid) Paul Ryan, who stepped in to attempt to fill remarkably small shoes in 2011. Again, there was nothing particularly wrong with his speech (not that it was all that memorable either), but he was unable to capitalize on any potential soft power he may have garnered with his response. Ryan, of course, ran unsuccessfully with Mitt Romney in 2012 against Obama and Biden, and will not be seeking the highest office in the land in the upcoming election cycle.

Easily one of the least exciting responses, even in a sea of mediocrity, then-governor of Indiana Mitch Daniels gave a speech that almost no one remembers. And, apparently, Daniels didn't care for it too well either, as he dropped out of politics altogether soon thereafter, and is now president of Purdue University. Unfortunately, there are few audiences less forgiving than college students, so if Daniels was looking for a more receptive reaction to his oratorial skills, he may have picked the wrong field.

Senator Marco Rubio was once considered a serious GOP contender for the 2016 presidential ticket, but then he took a sip of water that made him the most awkward person to ever appear on nationally broadcast television. Apparently, Rubio thought that by maintaining eye contact with the camera while drinking from an uncomfortably small water bottle, he would be able to telepathically communicate his message with the utmost sincerity to home audiences.

He didn't. It was so incredibly awkward.

And you just can't be presidential if you make people that uncomfortable just by drinking water.

Where Did The Fact Checkers Go? — Cathy McMorris Rodgers

Initially, Rodgers was thought to have delivered one of the better responses from the GOP. After all, she was a breath of fresh air after a disappointing series of Republican men. But then, it emerged that Rodgers had cited "facts" that simply weren't true, making them... not facts. As Salon explained,

[Last year, it] emerged that “Bette in Spokane,” a woman McMorris Rogers claimed faced skyrocketing health costs as a result of Obamacare, had in fact exaggerated her premium hike and turned down cheaper insurance options.

And then we arrive in present day, where Sen. Joni Ernst's address was blasted mercilessly by Twitter for both its content and delivery. Joi Ernst certainly does know how to make people squeal — of laughter and discomfort.

Is A Good SOTU Response Just A Myth?

So what's the deal, guys? Does a decent response to the State of the Union simply not exist? Well, I suppose that depends on which side of history you're sitting on. Today, in 2015, former President Bill Clinton's 1985 response to then-President Ronald Reagan's State of the Union address is remembered fondly. It's weird, but pleasantly natural-sounding in comparison to the lineup of automatons we've seen in the recent past. But 30 years ago, Clinton's response was blasted as one of the worst response in history, and even today, some still perceive his speech as a complete disaster. At least, the New York Daily News listed it as one of its "five worst responses," alongside the likes of Jindal and Rubio.

So who knows, guys. Though we may not appreciate bread bag shoes and a suit that matches your eyes a little too well today, we may be eating our words in a few decades when we remember Ernst's speech as a major success.

But then again, maybe not.