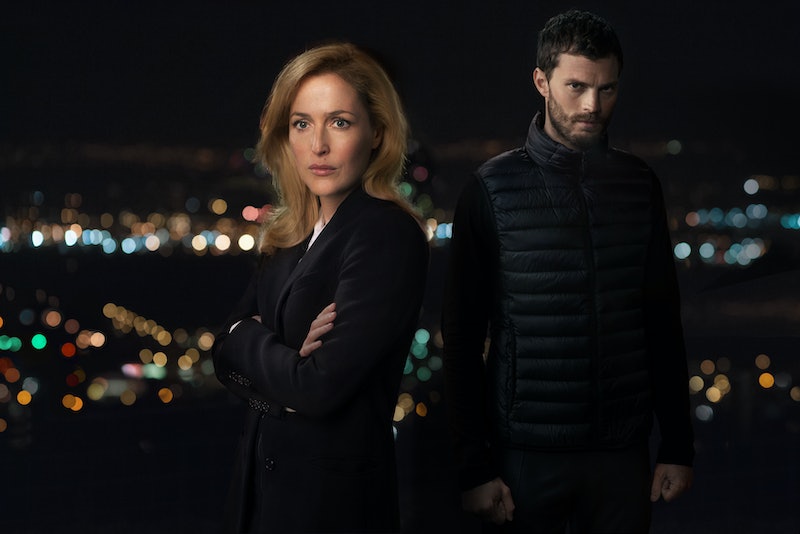 Quick: what do Fox' The X-Files, NBC's Hannibal, and BBC's (and Netflix's) The Fall all have in common? Other than that they're amazing shows, of course. That's right — they all star the beautiful, magnetic Gillian Anderson. While we await news of the supposed resurrection of The X-Files and the delayed Season 3 premiere of Hannibal , thank goodness that the BBC has saved us from an Anderson drought by gracing us with a second season of their gripping serial killer drama — all six episodes of which you can stream on Netflix right now.

In case you watched Season 1 of The Fall about a year ago and need a refresher course before you start bingeing Season 2, or if you somehow missed the first season and need a crash course on the series before diving into the new episodes... Wait, who am I kidding? The first season is only five episodes! Go watch them right now, what are you waiting for?!

What's that? You really don't have time? Well, alright then. Whether you're a returning fan or an uninitiated viewer, here's everything you need to know about the BBC's most disturbing show before you press play on the Season 2 premiere, "Walk The Line":

Anderson plays Superintendent Stella Gibson, a London detective called into Belfast to review how the department handled the unsolved investigation of the murder of a young woman. She ends up being the first to link the killing to a series of slayings around the city. It seems someone is targeting women who are young, dark-haired, and have high-powered jobs. Over the course of the season, she grows increasingly close to catching the murderer, but falls just short of apprehending him before he leaves town. Season 1 ended with the surviving victim of his latest botched killing awakening from a coma, supposedly to tell Gibson everything she knows about her attacker.

We also got to know a bit about Gibson's personal life, including that she once had an affair with her supervising officer. She's an unapologetically sexual woman who enjoys claiming the kind of power in the bedroom usually relegated to men. She has a one-night stand with Belfast Sergeant James Olson, although he's assassinated by a thug soon after.

The Fall is refreshingly different from other serialized crime shows like The Killing because it isn't a whodunnit. We've known from the very beginning who the murderer is: Paul Spector (Jamie Dornan, 50 Shades Of Grey), a devoted husband, doting father of two, and gainfully employed bereavement counselor. He occasionally slips out at night to stalk and eventually murder his targets, telling his wife that he's volunteering at a suicide hotline.

When video of himself and his daughter turns up on surveillance footage of one of his victims, he's forced to report himself to the police in an attempt to avoid suspicion. But since he actually has no alibi for the night of the murder, he has to ask his wife to life for him. She does, and Paul is released, but he quickly decides to flee Belfast. He places a call to Gibson, insisting that he's done killing, drops his phone into the river, and drives off with his family to Scotland.

Paul's wife, a neonatal nurse, was blissfully unaware of her husband's transgressions until he asked her to lie for him to the police. Her suspicions raised, Paul comes up with a cover story that's almost as bad: he tells her he had an affair with their 15-year-old babysitter and that's why she needed to lie for him. Sally Ann tells her husband she's leaving him, but when she reveals that she's pregnant with their third child, he convinces her to leave town with him to try for a fresh start.

The Spector's young babysitter has a giant crush on her wards' hot dad. Things took a scary turn when she discovered a lock of hair from one of Paul's victims that he kept in his desk drawer. He violently wrestled her to the floor and forcibly took it back from Katie, lying that it was from his dead mother.

Hey look, it's Kalinda! The soon-to-be-departed co-star of CBS's The Good Wife fills much the same role on The Fall as she does on that legal drama... and she looks just as good doing it, too. Instead of a private investigator, Archie Panjabi's Dr. Reed Smith is a pathologist who assists Gibson in her investigations.

Lurking in the back right corner of that picture there is patrol officer Danielle Ferrington. She was first drawn into the case because she felt responsible for the deaths of one of Paul's victims, not having done enough to protect the woman, in her opinion. She has proven a stalwart assistant ever since being hand-picked by Gibson... who didn't even flinch when Ferrington informed her that she was a lesbian.

Assistant Chief Constable Jim Burns is the man who Gibson had an affair with years ago, and their relationship remains respectful if restrained. He's also involved in some shady dealings with one of Paul's victim's father-in-law — although, admittedly, that whole C-plot is the most indecipherable and least interesting of the show. Hopefully it pays off in Season 2!

Get ready to dive into the all-new episodes with this promo:

More like this
Where Is Oscar Torres In 'Only Murders In The Building' Season 2?
By El Hunt
Yinka Bokinni Recalls Terrifying Truth At Heart Of 'How To Hire A Hitman'
By Frances Stewart
Everything You Need To Remember Before Westworld Season 4
By Brad Witter
The “Beatrice Six” Were Awarded $28 Million After Their Wrongful Convictions
By Brad Witter
Get Even More From Bustle — Sign Up For The Newsletter