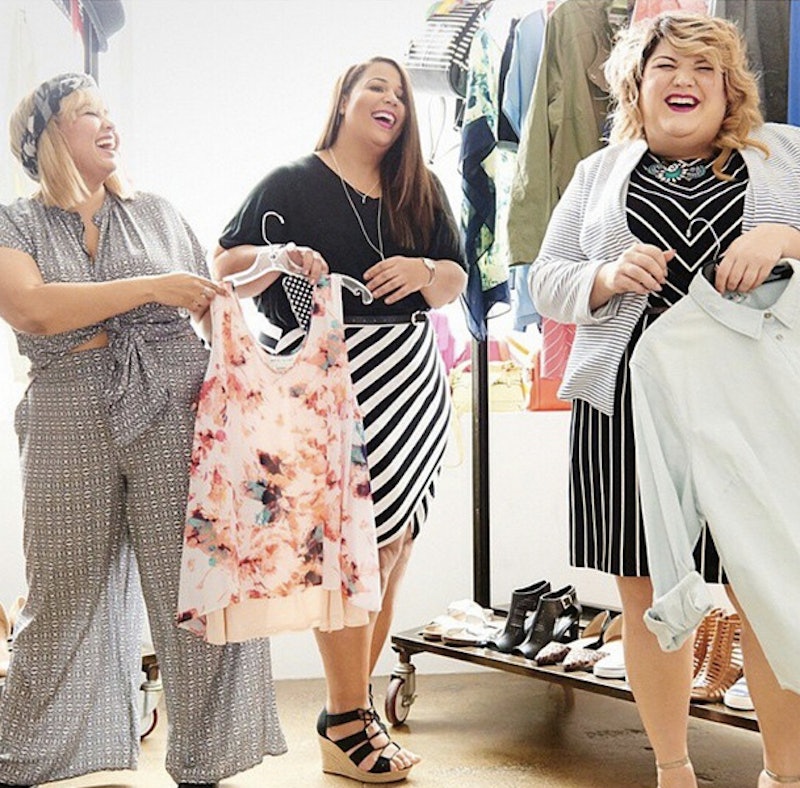 News broke this morning that the mega retailer we all love to love and hate to hate will be releasing a new plus-size collection come mid-February: Target. The AVA & VIV collection — for which only one photo and one video have thus been released — is already proving to be quite the set of plus fashion rule breaking ensembles. Equipped with stripes, bold prints, and even some basic staples like long-sleeved denim tops and Hunter green rain macs, AVA & VIV undoubtedly seems like a response to the many-a-backlash Target has been receiving for over a year. That they've teamed up with ultra babes and body positive superstars Nicolette Mason, Gabi Gregg and Chastity Garner only further proving that the mega-brand has been listening — and is willing to change.

Between announcing that the plus-size Lilly Pulitzer line would only be sold online, to labeling that now-famous plus-size dress "manatee grey" when its straight-sized counterpart was simply "heather grey," Target was seemingly on the rise to insta-hate. Lynette Rowlands even led a Change.org petition against the brand for grouping plus and maternity fashion into the same category, and limiting their plus section to a couple of racks in the boondocks of their brick and mortar shops. But I don't believe in holding grudges — especially not when the person (or brand, in this instance) makes positive steps to change the way things are done. And there is no disputing that AVA & VIV is the climactic turning point: The cumulative result of all the rage Tweets and petitions and boycotting that made Target the focal point of a revolt in 2014.

When I consider all the hate mail Target received in the last year or two, I can't help but be thankful for it (no gasps of shame necessary, just hear me out). Humans have been more vocal than ever before about the continued woes of size discrimination and the subsequent necessity of the size acceptance movement. And that's important. Silence can be beautiful and soporific at times, but when it comes to progressiveness and needed social change, quiet contemplation is not ideal. And although the continued expansion of social media and the day-to-day advancements of technology also mean that fat shaming is more accessible and visible than ever, this is does not detract from the ever-growing visibility and voice that plus-size men and women now have a platform to express.

In their teaser video for the new line, Nicolette Mason — blogger, editor and LGBT activist extraordinaire — says, "It's really comforting to know, as a consumer, that a brand is listening." And that's the key to Target's latest announcement. I am convinced that the reason for the success of retailers like ModCloth is their continued inclusion of the customer. Be it through customer surveys, social media relationships with consumers, blogger relationships, or user style galleries, ModCloth continues to prioritize the person buying the clothes. They listen. And I can't help but feel that Target is finally following suit.

The very inclusion of world-renowned bloggers and vocal proponents of body positivity is a statement in and of itself. As we can see from the video, Gabi, Nicolette and Chastity weren't just models hired for a day. Their input was considered and worked with. (Gabi's suggestion that the collection include a track pant was luckily seen through.) "We got to give some feedback on hemlines that we love, colors that we love, things that we don't want to see," adds Nicolette in the video.

All three women had previously raised their concerns with the brand for its past faux pas, but rather than see their collaborative efforts as an act in hypocrisy, I see their willingness to be part of this new, in-house collection as a sign that it must be something special. If these ladies are teaming up with Target, it's because Target is trying to do better — to make a better product for a market still scarcely catered to in comparison to that of women under a size 12. And we can't boycott it. Not just because the options of clothing available to plus-size women are still scarce (although this is an indisputable fact). But because the movement toward size acceptance is one that pushes for change — and ultimately, Target is responding to that push.

Although the official lookbook for AVA & VIV won't be released until tomorrow, everything we can gauge from the teasers thus far is nothing short of beautiful. From the track pant/crop top combo Gabi is rocking to the stripes that Chastity and Nicolette shine in, these items aren't just "good for plus-size fashion." They're good for Target — a brand that has always favored A-line silhouettes, monochromatic hues and a traditionally "flattering" (a.k.a. boring) aesthetic. And they're good for fashion (all size labels aside).