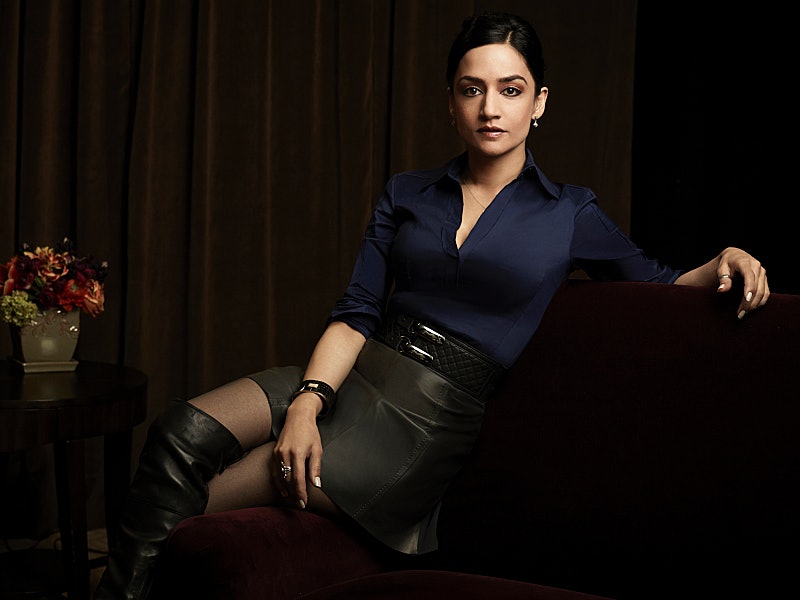 Archie Panjabi already has two dynamic, complicated characters under her belt that are on their way to being pop culture icons. On The Fall Panjabi plays Dr. Tanya Reed Smith, the fascinating pathologist assigned to the case involving serial killer Paul Spector. In Season 2 of The Fall, Tanya really gets to shine particularly in her interactions with Stella Gibson, the badass lead character played by Gillian Anderson. But Panjabi is far more known for her six season run as in house investigator Kalinda Sharma on The Good Wife.

Kalinda started off as a fan favorite for good reason. She's smart as hell, sexually realized, dynamic, and had leather jackets I'd kill for. Then Season 4 happened. It's understandable why Archie Panjabi is leaving The Good Wife. She hasn't interacted with Alicia Florrick in over 30 episodes and her character has often felt separate from the main thrust of action on the show because of this. Her character hasn't had much good development since Season 3 except when it comes to her relationship with Cary Agos. Here comes the hard question. How does Kalinda Sharma on The Good Wife stack up against Dr. Tanya Reed Smith from The Fall?

Kalinda Has the Better Wardrobe

How could this ever be a competition? Kalinda is known primarily for two things: being a complicated, mysterious character and wearing awesome leather jackets. She confounds expectations and looks stylish while doing so.

Kalinda Has the Cooler Career

OK, they both have cool careers that they're dedicated to and very good at, but I'm giving the edge to Kalinda because as a crime-lover, I have a soft spot for detectives. Even though Kalinda's character takes a downturn in Season 4, she remains a focused detective. Sure, a lot of times it seems she gets her way by manipulation and flirtation (to say the least) but she reads people well and can usually figure out a situation rather quickly. I wish Kalinda could be my mentor.

Both Have Sex Lives That Revolutionized Television

Neither Kalinda nor Tanya have ever identified themselves as "bisexual." So, let's just say they're sexually fluid. We've seen a lot of Kalinda's love life with men and women. It seems like no one can resist Kalinda (except for Alicia when it comes to friendship). Sometimes to the point of unbelievability. But I understand why a sexy, leather clad, mysterious detective would be irresistible to a lot of people. Tanya's life outside of work has been mentioned, including her daughters, but we haven't really seen any of it.

But we did get a great scene between her and Stella in Episode 3 that got Tumblr going wild. Stella slips next to Tanya and they start making out to make an annoying dude hitting on Tanya leave. But we can totally tell both ladies are into this. Tanya ends up deciding not to go up to Stella's hotel room, which seems to be against all laws of nature and what's right in the world.

So while the writers lean to heavily on Kalinda's sexuality without developing the rest of her personality enough in later seasons, on The Fall the writers tease us about Tanya. Let's call this one a draw.

Who is Better Written?

In an interview with Radio Times about her exit from The Good Wife Panjabi said,

When I was kissing [Gillian Anderson], Allan Cubitt, the show's creator and director, had to say, 'Archie, can you hold back?' because Gillian was supposed to take me by complete surprise. I didn't think that I was very forward in [the scene], but obviously after a while a character starts to affect you. I thought, 'OK, I think it's time to go now.

If Panjabi had said that she was leaving because she's gotten mediocre writing for the past few seasons, I would totally understand where she was coming from. There have been some bright spots in the past few seasons mostly in her interactions with Will (who we all dearly miss) and Diane but they still don't redeem the mess that is Season 4. Tanya on The Fall is a very interesting character who has gotten some juicy moments but she she hasn't been developed enough to rival the Kalinda we got in the first 3 seasons of The Good Wife.

More like this
'Friends' Creator Marta Kauffman Opened Up About Misgendering A Guest Character
By Grace Wehniainen
Who Is Liam Neeson's Character In The Obi-Wan Kenobi Finale?
By Kadin Burnett
Viktor Hargreeves’ Coming Out Scenes Are The Sweetest Part Of Umbrella Academy Season 3
By Gretchen Smail
6 Mind-Blowing Fan Theories About How Stranger Things Will End
By Kadin Burnett
Get Even More From Bustle — Sign Up For The Newsletter