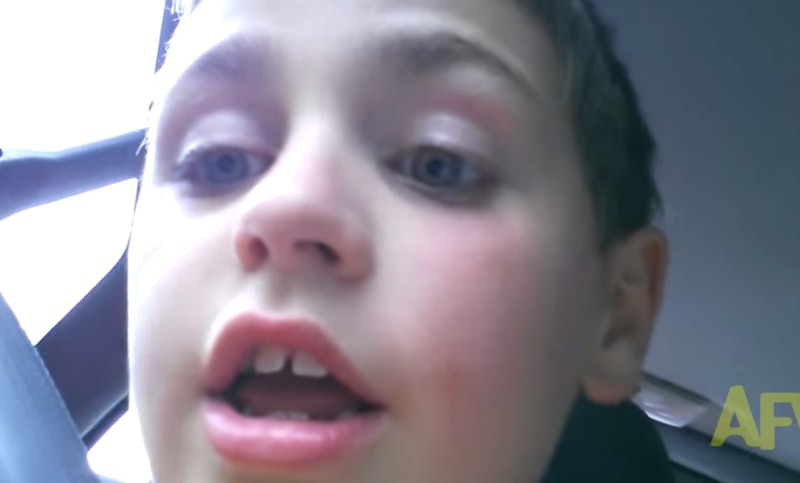 As a person who grew up watching every Amanda Bynes and the Olsen twins movie repeatedly, I had some extremely unrealistic expectations about my first kiss. In the end, it was just as awkward and sloppy as all "first things" in life, and looked decidedly unlike that scene where Lizzie McGuire and Gordo kissed for the first time (just saying). But maybe the key is to get that first smooch in before you're even old enough to indulge in rom-coms. Maybe if we went into the experience with pure enough hearts, we would've been as fulfilled as this kid describing his first kiss. He was clearly blown away in a way that slightly older, tween rom-com watching first kissers could only dream of.

"It's so mind-blowing that I can't just feel it, UGH!" he declares, referencing several times how it affects both his brain and his heart. This is all giving me so much hope for the romantic intelligence of Generation Z. His name is Griffin, and although he doesn't name drop the girl who kissed him, I imagine she is one lucky gal (especially since she probably got some ~mad flavor~ from what appear to be Cheeto crumbs on the side of Griffin's mouth; everyone knows the key to a woman's heart is cheese.)

Now all I need is the Nicholas Sparks novel where either he or the girl moves away and then they meet up fifteen years from now, when the girl is running for political office and he's trying to save a puppy orphanage and their WORLDS UNEXPECTEDLY COLLIDE TO SPARK ROMANCE ANEW! (OK, shutting up now, but think about it.) Here is the adorable first kiss video in all its glory:

More like this
American Girl Doll Memes Are Going Viral On Instagram & Tiktok
By Emma Carey
Cluttercore Is The Home Decor Trend That Lets You Be Messy
By Emma Garza
This Viral TikTok Trend Is Exposing Everyday Scams
By Sophia Moore
What Is A “Softboy?” The TikTok Term & Aesthetic, Explained
By Courtney Young
Get Even More From Bustle — Sign Up For The Newsletter