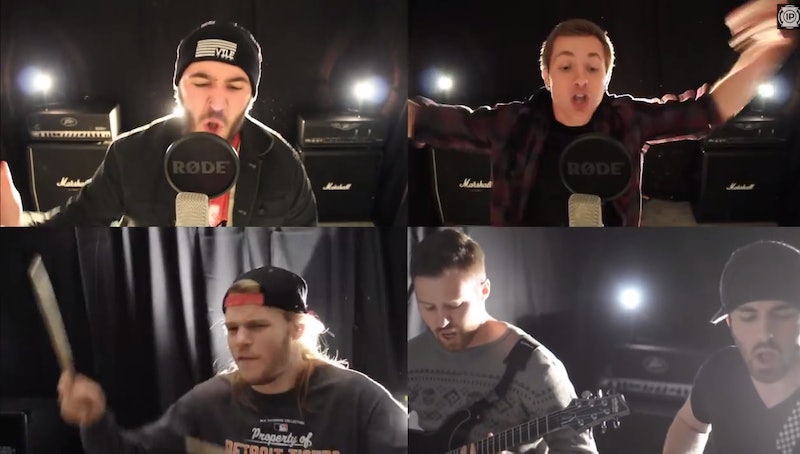 Taylor Swift is no stranger to people covering her songs. In fact, when it comes to the hit "Blank Space," she has encouraged people who record their own renditions so enthusiastically that she has personally tweeted covers of a couple who did an instrumental version together, as well as a group who mashed "Blank Space" beautifully with her song "Style". But I doubt that in any of her "Wildest Dreams" (help me) did she imagine anybody would do a version of any of her songs quite like the punk version of "Blank Space" covered by the band I Prevail. It's so hardcore that my briefly punk 13-year-old self is head-bobbing like a lunatic.

The cover is doing astoundingly well for itself, climbing up the top 200 on iTunes (as of right now, it's number 94) and already attracting millions of YouTube views, which comes as no surprise when you give it a listen. It somehow manages to stay true to the original melody while expressing the sentiments behind the song in a gnarlier, way less subtle way, complete with screams replacing a good portion of the lyrics. If you didn't already know it was Swift's tune, you could easily just assume that it was written to be a punk song in the first place.

The most jarring difference with the cover, though, is that it is completely sung from a male perspective this time around, and somehow that combined with the screaming makes it eerily menacing (made all the more confusing when you see how friendly and chipper the band is at the end of the video. One of them even starts to yell his number out for Taylor, just in case.) I have to say, of all the many variations I've seen of Taylor Swift songs, this is, by far, the one I was least expecting, and I weirdly can't get enough of it.