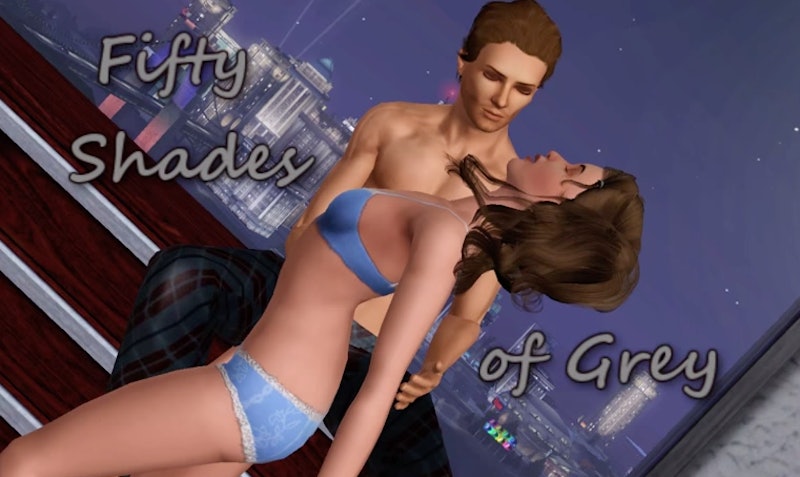 I am one of the few remaining people on earth who has yet to read Fifty Shades of Grey. I'm not crazy about the concept of the books in general, but I'm not about to knock anyone who does enjoy them. However, although I've never picked up E.L. James' best seller, there are a few things I do know about Fifty Shades, as it would be impossible to keep myself totally in the dark now that the book and the movie has inserted itself into all areas of pop culture. One of these things I've been made aware of? The legendary Fifty Shades of Grey tampon scene, in which Christian Grey takes on the task of removing Anastasia Steele's tampon.

Unsurprisingly, this scene didn't quite make the cut into the film version, but even before that news was released, a fan took it upon themselves to create a visual version of Christian removing Ana's tampon as an animated video instead — and the result is absolutely horrifying.

Why is it so scary? I don't know what the worst part of this Sims-themed trailer for the movie is: the disturbing text, the imagery, or the undeniably creepy music. Maybe it's all of these things combined. But what I do know for sure is that I will be having nightmares because of it. And in case you don't want to subject yourself to the video, I took the liberty of picking out the most terrifying, unsettling scenes from it so you don't have to.

Just... Get your eye bleach ready afterwards. I'm talking pictures of the cutest kittens you can find.

As if it's not bad enough that the captions are in Comic Sans, I am just upset at how Sim-Christian is asking Ana about her period in this way. In fact, I'm upset that there's dialog at all in this video.

This face is going to haunt me in my dreams for the rest of my life. Just know that while this is happening, Sim-Christian is pulling a tampon out of her vagina. I can't.

Yep, it's flying into the toilet. And yes, it was probably made in MS paint.

And The Resulting Sound Effect

When I think about periods and tampons in general, "splash" isn't on my list of favorite sound effects. In fact, there are no sound effects we should talk about that happen during your period. It's just not up for discussion.

I've heard that this is Ana's favorite phrase to use during sex in the book, but if someone was yanking feminine hygiene products out of my body, I would be thinking a lot of things besides "holy crap," and they would include every expletive in the book.

And Finally, The Ending