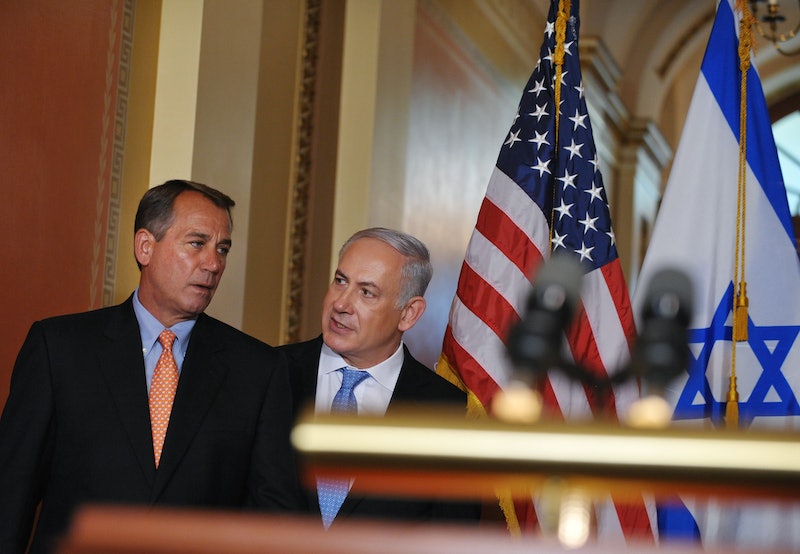 The latest power play from congressional Republicans is a doozy. On Wednesday, House Speaker John Boehner announced he had invited Benjamin Netanyahu to speak to members of Congress about Iran's nuclear ambitions and the threat of Islamic extremism. Israeli Prime Minister Netanyahu has spoken to Congress twice before, once in 1996 and again in 2011, but his latest invitation came from Boehner amidst the tenuous post-State of the Union atmosphere without first traveling through the typical political channels usually traversed when a foreign leader is involved. Now, House Democrats are calling Boehner out on what they believe is yet another political stunt meant to undermine President Obama.

In a press conference on Thursday, leader of the House Democrats, Rep. Nancy Pelosi, D-Calif., expressed doubt in the foreign policy motives behind the March 3 speech:

If that's the purpose of Prime Minister Netanyahu's visit two weeks before his own election, right in the midst of our negotiations, I just don't think it's appropriate and helpful ... These negotiations have gone on for a long time. They're delicate.

Pelosi suggested that the speech could give Netanyahu "a political boost" in the upcoming Israeli elections, which follow only a few weeks after his slated congressional visit.

Although the White House was no doubt surprised by Boehner's announcement, President Obama welcomed the visit, but made it clear he would not visit with Netanyahu due to the close proximity of the Israeli elections.

"As a matter of longstanding practice and principle, we do not see heads of state or candidates in close proximity to their elections, so as to avoid the appearance of influencing a democratic election in a foreign country," said National Security Council spokeswoman Bernadette Meehan in a statement on Thursday.

The president warned us not to move ahead with sanctions on Iran, a state sponsor of terror. His exact message to us was, ‘Hold your fire.’ He expects us to stand idly by and do nothing while he cuts a bad deal with Iran. Two words: ‘Hell no!’ … We’re going to do no such thing.

I am specifically asking him to address Congress on the threats posed by radical Islam and Iran. America and Israel have always stood together in shared cause and common ideals, and now we must rise to the moment again. Let’s send a clear message to the White House — and the world — about our commitment to Israel and our allies.

It's the latest in a string of political undercuts from the Republican controlled Congress, the first of which came in the form of a now-abandoned bill that would have criminalized all late-term abortions. The contentious bill, which had proven unpopular among not only Democrats but a sampling of Republican women as well, including Rep. Renee Ellmers, R-N.C., was dropped after House leaders were unable to get the required number of votes from their own party to push it through to the Senate.

Ellmers and a handful of fellow female House Republicans had voiced concern over the bill's absolute ban, saying that the inclusion of rape and incest victims was one step too far, prompting leaders to head back to the drawing board. After removing the most controversial points, the bill was hurriedly pushed through the House in a move meant to coincide with the annual March for Life, an event that brings together hundreds of thousands of pro-life activists to mark the anniversary of Roe v. Wade (the 1973 decision that legalized abortion).

In another hasty move, congressional Republicans this week also declared war on President Obama's most recent executive action, which granted amnesty to the 5 million illegal immigrants already living in the United States. The Secure Our Borders Act, proposed by Homeland Security Committee Chairman Michael McCaul, R-Texas, seeks to mandate deadlines for full "operational control" of the southern border (or total security over all border crossing attempts) and threatens penalties for all Homeland Security employees who are unable to meet target deadlines. In a statement Tuesday, Sen. Jeff Sessions of Alabama added that his colleague's bill didn't go far enough, claiming that the legislation would do nothing to stop the "endemic practice of catch-and-release, ensuring large amounts of illegal immigration will continue unabated."

Republicans have been on the offensive of late, channeling large amounts of energy to dissuade the American public from the remarks of President of Obama in his annual State of the Union address, which covered topics from climate change to income equality. GOP committee appointments have proven controversial as well: after taking control of the Senate, conservative leaders quickly placed Sen. Ted Cruz, a notorious climate-change denier, in the driver's seat of the Subcommittee on Space, Science, and Competitiveness, which oversees the annual NASA budget.

By extending an invitation to Netanyahu, Speaker Boehner and the rest of his party have made yet another bold move in direct opposition to the president. In a statement following the State of the Union address, Boehner lamented what he believed to be missed opportunities:

There is a serious threat that exists in the world, and the president last night kind of papered over it. And the fact is that there needs to be a more serious conversation in America about how serious the threat is from radical Islamic jihadists and the threat posed by Iran.