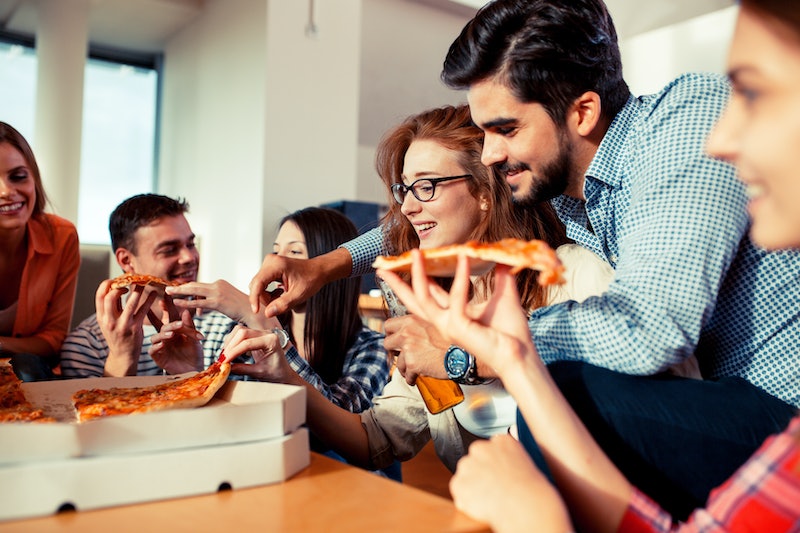 When Tiffany Rajah started her freshman year at University of California, Berkeley, she carried 124 pounds on her 5-foot-3 frame. By her second semester, stress from difficult classes in her pre-med track became overwhelming. She started replacing snacks with coffee and 5-Hour Energy drinks, and she frequently skipped meals so that she could spend more time studying for her biology and chemistry classes.

“I found myself getting four to five hours of sleep daily and missing dinners to study,” says Rajah, whose family first noticed she was thinner when she came home at Christmas. They commented she looked good because “it wasn’t too drastic” yet. By the end of her freshman year, Rajah says she weighed no more than 110 pounds. Now in her junior year, she has dropped to just 100.

Her experience is more common than you'd think: Most students don’t actually gain the infamous “Freshman 15,” according to Ohio University Professor Jay Zagorsky and University of Michigan-Dearborn Professor Patricia Smith, who co-authored the 2011 study “The Freshman 15: A Critical Time for Obesity Intervention or Media Myth?”

Their study, which looked at both men and women and examined several years’ worth of data, shows that 25 percent of incoming freshmen actually lose weight. The quarter of students who slim down in their first year typically drop at least a pound, though some lose 10 or even 20.

Causes of weight loss among that 25 percent can range from dieting and exercise — to eating disorders and depression. Intense pressure to do well in school seems to be another major factor. Students like Rajah tend to prioritize academics over their health, and when homework piles up, students often forego eating.

“Most people said I looked better ... My boyfriend said he preferred the skinnier me and always complimented my flat stomach, my guy friends said I looked ‘hot,’ and I could finally fit into a size 2 — sometimes even a 1.”

Since weight loss among college students is a pretty neglected area of research, we can’t pinpoint exactly what causes it, according to Linda Van Horn, a registered dietitian at Northwestern University.

“Because we don’t have data, I really hate to speculate,” Van Horn says. “I doubt that there’s any one-size fits all answer to that question."

Van Horn says researchers have likely focused on the more prevalent issue of weight gain, resulting in little information on skinny students. Weight loss usually isn’t taken as seriously by students either — college kids often congratulate one another when they slim down, instead of considering the negative health implications.

“Most people said I looked better,” Rajah says. “My boyfriend said he preferred the skinnier me and always complimented my flat stomach, my guy friends said I looked ‘hot,’ and I could finally fit into a size 2 — sometimes even a 1.”

Of course, experiences like Rajah's don't mean the Freshman 15 is a complete myth: studies have found that roughly a quarter of college freshman do gain at least five percent of their body weight, an average of about 10 pounds, during their first semester.

But that doesn't answer the question: why do another quarter of students lose that weight? Possible reasons could range from bad dining hall food to eating disorders — without conclusive data, no one can be entirely sure what the main cause is. After all, weight loss can be caused by anything from exercise, dieting, emotional distress, illnesses, medications, to a still-changing body type. Conditions ranging from depression to diabetes can also cause unintentional slimming, and certain drugs like Adderall can suppress appetite.

Disordered eating is likely also a major factor. A campus survey at the University of Michigan found that 27.8 percent of female and 11.8 percent of male undergraduates have food-related disorders, and few get the help they need. Forty percent said they had increased restrictive eating since attending college, and 30 percent said they dieted more than 180 days in the last year.

Dr. Jay Zagorsky, the co-author of that study that calls the “freshman 15” a myth, thinks stress is likely another major culprit in freshman weight loss.

According to Dr. Michael Emond, an associate professor of psychology at Laurentian University, about 40 percent of the population avoids snacking when they're worried.

“When we’re under stress, in theory, we should all shut down our feeding mechanisms,” Emond says. “Physiology says we shouldn’t want to be eating, we shouldn’t want to be hungry, because we’re trying to mobilize energy, not store energy. Threats in the past would have been running from a bear, running from an enemy, getting ready to fight — so that’s not a good time to get hungry and want a snack.”

Anxiety activates the sympathetic nervous system, which prepares an individual to react by accessing his stores of glucose, Emond explains. This system elevates the heart rate and respiration, increasing the flow of oxygen and getting someone ready to protect himself or escape. Meanwhile, the body shuts down the parasympathetic nervous system, or the digestion and hunger mechanisms.

If a fight-or-flight response seems like an overreaction to a midterm, that’s because our bodies can’t differentiate between types of panic. And when stress from school takes priority over health, ease of access to food can also play a role in how often students are eating. Some students have trouble maintaining a healthy weight once they lose entry to dining halls and need to do their own grocery shopping. According to the San Jose State University study, 56 percent of all underweight respondents lived off campus.

“Your emotions kind of override your better judgment,” he says. “It becomes literally harder to eat. I was sitting in my room last night looking at my Chipotle burrito, just willing myself to eat this burrito, because I knew that I had to eat.”

Michael Alavarez, a 6-foot-1, 161-pound sophomore at Columbia University, says he has lost four pounds since he moved off campus, even though men are more likely to gain weight in that situation. While he doesn’t actively skip meals to study, he says “it becomes easier to not eat” for him and his friends, especially when they’re busy.

“[Going on] the meal plan is making one decision, a smart decision that forms your rest of the year, whereas this year I feel like every day I’m making three decisions, and that just makes it harder,” he says. “It’s just more to think about.”

Emotional distress can also affect young people and make it hard to eat a balanced diet. Alvarez, who recently broke up with his girlfriend, says lately, eating can be a struggle.

“Your emotions kind of override your better judgment,” he says. “It becomes literally harder to eat. I was sitting in my room last night looking at my Chipotle burrito, just willing myself to eat this burrito, because I knew that I had to eat.”

As for Rajah, she says gaining the weight back is not an option. Even though she has lost weight with each passing academic year, she makes it very clear that her schoolwork comes first. The last time she visited a doctor, her weight wasn’t low enough to raise concern.

She says she has not tried to stop the weight loss trend. “I feel as if I don’t really have a choice if I want to do well at my school.”

Editor’s Note: If you’re struggling with poor body image or an eating disorder, know that you’re not alone, and help is available.