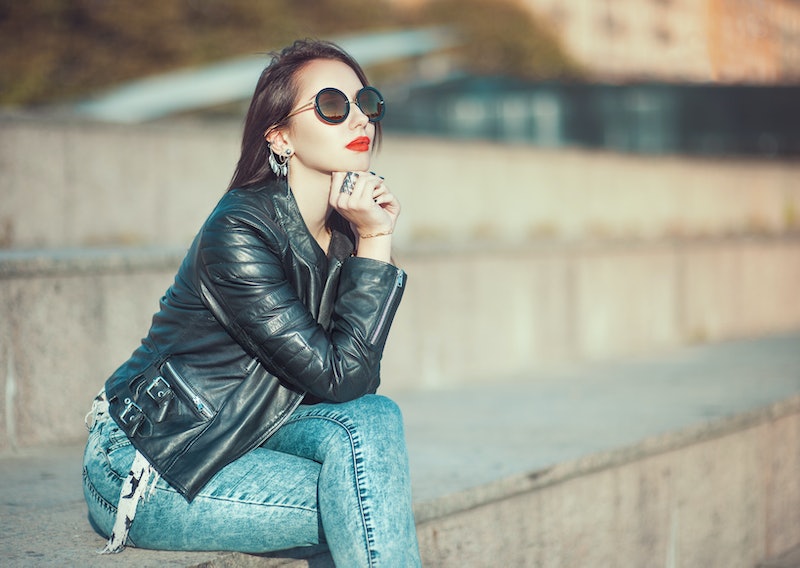 As a person who identifies as female, I often struggle with the word "woman." I’m proud to be a woman, of course, but I wonder what exactly it means to be one, most of the time. After all, I am afraid of growing up, and little girls aren’t grown-ups — but women are.

When you decide you've become a woman, of course, is a personal decision. Some women equate it with getting their periods, while others still don't think of themselves as women yet.

I know I felt like a woman when I moved into my own apartment eight years ago; free of roommates, as I unpacked my belongings, painted my walls "fairytale blue," and picked which wall I'd put my bed against. But there have been moments since then where I still feel like a little kid; like when I'm sick and all I want is my mom, or how I still sleep with my stuffed animal, Bernie the Lamb. Still, as I write this, I most certainly feel like a woman, so that's something ... Right?

We asked some Bustle readers to also share the first time they realized that they were a woman. Here’s what they had to say.

1. When Body Acceptance Kicked In

"When I was finally able to embrace my body in a positive light instead of the negative light I had when I was young."

2. When Having Guy Friends Became 'Tricky'

"For me its probably when I realized that making and keeping good guy friends was 'tricky.' I still struggle with this."

3. When Turning 30 Wasn't Too Faraway

"The realization of being an adult woman hit just before my 30th birthday. Funny enough, the two children I had produced before that point did not drive home the whole 'I'm an adult now' message."

4. When Hair Started Showing Up In New Places

5. When Someone Called Me An Adult

"When I turned 30 and someone called me an adult, I was forced to realize I was a woman. Although, as far as adults go, I'm just not there yet. I don't think I ever will be."

6. When Being Financially Independent Became A Reality

"The moment my parents stopped paying my bills (a good moment!) It was nice to feel like, 'Okay, I'm grown up, I can mostly sort of, kind of, take care of myself now.'"

7. When Hanging Out With Mom Became Cool Again

"When I saw my mom as not just a parent, but a friend, confidant, and someone I can have so much fun with, as opposed to all those teenage years of, 'Mom, go away!'"

8. When Being Called 'Sweetie' At Work Became Bullshit

"Probably when I realized that when something bad happens in my life, my first thought is not to call my mom, but to call one of my two best friends."

10. When It Was Time To Let Go Of Emotional Baggage

"This is something I am still realizing. This past year may be the first time I have really felt like an adult. I had some harsh truths shoved in my face, finally had to let go of my first love and some old dreams … and put myself back together again.

I took on loads more responsibility at work and am learning to unapologetically take care of myself. So many strides forward and yet I still feel like a fraud because my house is constantly messy. Adults can magically balance, like, EVERYTHING in their life, right?"

11. When Love Became About Partnership

"I know this may sound cheesy, but I'd have to say that it was when I knew I was in love for the first time. I'm not talking about puppy love, but real love that was about being equal partners in something that I was really committed to."

"I'd have to say when I got my period, but that's only because that's what my mom told me. But I was only 11, so maybe not."

"I still struggle with this. I know I am a woman, but I still often refer to myself as a girl. I don't feel mature at all."

14. When The Rest Of The World Suddenly Mattered

"When I finally gave a f*ck about the world outside myself. That's when I became a woman."