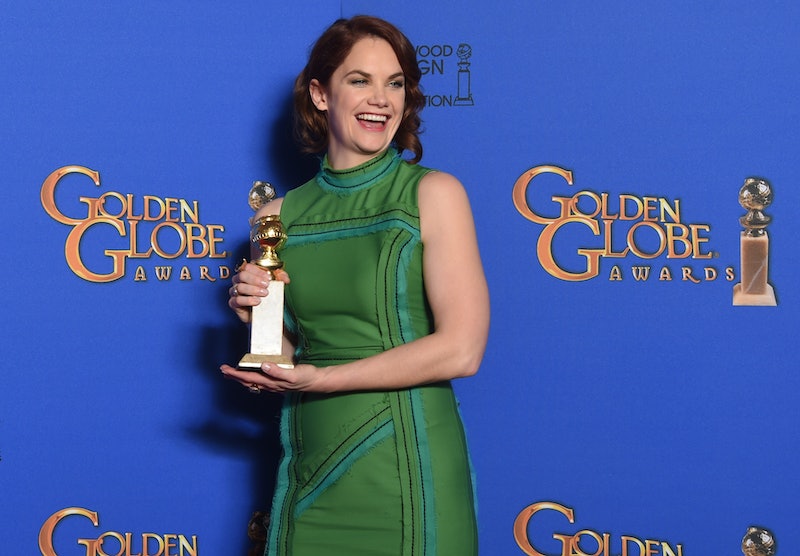 Ruth Wilson, who just won a Golden Globe for Best Actress in a TV Drama for her role in The Affair, has a bone to pick with Hollywood about the treatment of women in sex scenes. Or maybe I should say, a "boner to pick." (Had to get the snickering out of my system). Wilson feels sex scenes are unfair in that the responsibility to make one seem authentic falls on women, and especially women providing a good "orgasm face."

As she explained to The Edit,

I kept insisting, "Why have I always got to do the orgasm face? There should be a male orgasm face. Why is it always the woman who’s orgasming? Let’s analyze the male orgasm."

Of course, Wilson's not shy about participating in a sex scene, but she's right: there are certainly very unequal assumptions made about what male and female actors will do in sex scenes.

The actress is not the only one to take issue with the absurd notion that men's penises can never be shown on screen while women's private parts can. Earlier this year, Natalie Dormer who plays the magnificent Margaery Tyrell on Game of Thrones, said that the show's producers could absolutely "ramp it up" with regards to penis presence on the show. If you've been living under a rock for the past few years, you know that Game of Thrones is a buffet of boobs, and yet we are never allowed to see a penis. What is up with that?! Not that anyone necessarily wants to, but the principle remains — why is the female form allowed to be shown fully nude, when the male form is hidden?

Wilson's point about filming a sex scene is complicated. Yes, female actors have to bare it all and make it look real and like they are orgasming every time (LOL, the magic of the movies), but only if the sex is conventional, right? A woman on screen should be having a grand old time in bed, but NOT if she's receiving oral sex, because that's just too provocative. It's only in the past year that the MPAA has amended their prudish rating standards so that cunnilingus no longer calls for an NC-17 rating. Evan Rachel Wood took no prisoners before the ratings change, though, when she went on Twitter to voice her opinion about an oral sex scene being cut from her movie Charlie Countryman so it could get an R rating instead of NC-17.

"This is a symptom of a society that wants to shame women and put them down for enjoying sex, especially when (gasp) the man isn't getting off as well! Its hard for me to believe that had the roles been reversed it still would have been cut," Wood tweeted.

Ruth Wilson, Natalie Dormer, and Evan Rachel Wood all touch on different issues here from their personal experiences on set, but they are all speaking to a greater sexism in Hollywood ascribed to the filming of sex scenes. Wilson feels too responsible for making a sex scene seem real, and pressured to get naked in a way that men aren't; Dormer thinks there should be more male nudity to balance female nudity; Wood feels that women get censored when they are shown enjoying sex. ALL of these problems are true. For as racy as it wants to be, it seems like Hollywood still doesn't really know how to deal with women and sex. And that's pretty embarrassing.