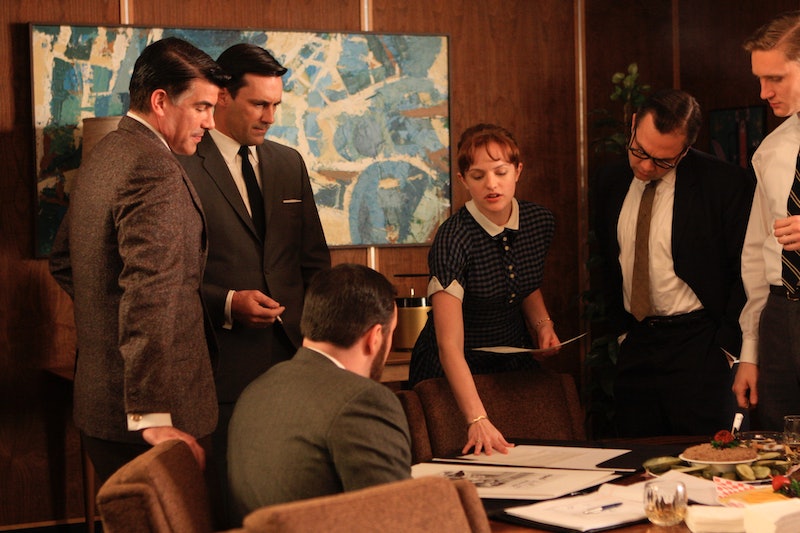 Your very first job after college can be your most important, the one that determines your salary and career growth possibilities for years to come. But for many young women, that first job can also be the one that introduces them to the wage gap. According to a survey by the American Association of University Women, “wage disparities kick in shortly after college graduation ... one year after graduating college, women are paid on average only 80 percent of their male counterparts' wages.” But the wage gap isn't the only sexual discrimination that Millennial women have to deal with in the workplace.

As the first generation to grow up after third wave feminism, you'd think we wouldn't be dealing with sexism at work. We grew up watching Gatorade ads where Mia Hamm bested Michael Jordan; we studied Stone Butch Blues or performed in a campus production of The Vagina Monologues in college. And we graduated with an expectation that the sexist attitudes we learned about in our gender studies classes were a thing of the past, relegated to episodes of Mad Men.

Unfortunately, the world hasn't changed quite as much since the days of Don Draper as we may have expected. I interviewed five different women in their early 20s about their experiences at their first job after college. And I found that, over 40 years after the passage of Title IX, sexist discrimination against young women at work remains common.

Jennifer* first noticed it about a month after she began an internship at a Los Angeles talent booking agency. A new, male intern was hired and "I was tasked with teaching him how everything worked around the office, how to evaluate musicians who sent us their material, and all of the administrative tasks. Our industry-related knowledge was equal — actually, I had a month more experience than he did. However, after I taught him how to handle the day-to-day administrative work, I saw that increasingly the ‘fun’ parts of the job that required critical thinking and relied on opinions were being directed to him — and I was still being asked to get coffee or pay the parking tickets.

"A couple weeks later, when some of my supervisors joked in front of me about my inability to drive (because I was a woman), I realized that it wasn’t just in my head. Their attitude dominated the whole office. At first, it felt surreal — I’m a feminist, I know what sexism is, but I had never thought that I would experience sexism so subtly. I felt trapped. I couldn’t do anything about it and I began feeling unwelcome in my workplace.”

"Coming out of college, I thought the notion of sexism in the workplace was an outdated concept,” says Tara, a woman in her early 20s from the Midwest. “I kind of bought into that third-wave ‘we've made it’ concept, and thought that I wouldn't be affected by it, or that it wouldn't be as male-dominated as it was, and that I was stronger than I was." Tara's first job was at an international auto industry giant as a technical translator. "I remember my first day when I walked into the office to see where we would be sitting after our training, and men's heads whipped around to look at us.”

Tara was one of 10 to 15 women in an office of 100 men, and she encountered sexism right away — like a client who specifically asked to be transferred to a male colleague because “Sweetie, I'm sure you're real great, but this is a real doozy and I need to speak to a man about it." Tara also dealt with trouble from her male coworkers — like the one who rearranged Tara's desk every night after she left, leaving rolls of toilet paper on her computer, and creating tiny nooses out of shoe laces and hanging them around her cubicle.

Her experience with a co-worker named Kevin is perhaps the most jarring. "I wasn't out at work, and [Kevin] asked me to have a drink after work. When I said I was busy that night he kept pressing... finally he found out I was gay. He [then started] to mess with my cases by deleting [important parts of them] and then reporting me to our boss. I got in trouble a few times before I realized his name was on all the cases. I reported this to my boss and [Kevin] should have been disciplined, but nothing ever came out of it."

Clearly, Tara’s workplace had no interest in being an accessible and welcoming environment for a woman — the behavior she dealt with continued throughout her tenure. She explained: “When I had my exit interview, I complained about the work environment to HR. [The HR rep] responded by saying ‘Oh, well we don't really go in there,'" and the conversation about her complaints was over. Taking her complaints past her exit interview "seemed pointless" to Tara.

However, not all the women I spoke with experienced harassment or discrimination. Hannah, whose first post-college job was at one of the top private banking institutions in the world, says “When I started, I was the ONLY female in my regional office of 30 bankers. ... I would say that 99 percent of the time, I felt that I was treated no differently than the guys at my level, except for the fact that sometimes I would walk in on a room of the bankers maybe talking about women or making an inappropriate joke.”

Not only did Hannah not experience the kind of blatant sexism that Tara did, but when she walked on her coworkers engaging in inappropriate joking, “they would stop because with me there, it could be a liability if I wanted to report them.” Until, of course, they “figured out that I like dirty jokes as much as the next frat bro.” Hannah’s work environment seemed like it was a much more welcoming environment for women than Tara’s — if you could handle the dirty jokes, that is.

But what about women who don't enjoy dirty jokes? Even though Hannah herself personally did not feel that she experienced sexism, the dominant attitudes and culture of her office could serve as a barrier for many women who'd otherwise want to work there.

And sexism in the workplace doesn't only come from men. Danielle, who worked as one of the few female employees at a large IT company, said, "My boss is a woman, and she will make comments about how skinny I am and how she's on a diet if I ever mention working out. I play on a competitive soccer team for fun and don't have weight loss goals, so it's especially frustrating when she assumes I do it for my looks or waistline. Similarly, when the team goes out for lunch, my boss will consistently make a comment about how much I eat and how skinny I am. ... She would never say [that] to an associate who was the same age as her, much less a male colleague.”

It’s also important to acknowledge the way that race and gender intersect when it comes to dealing with sexism in the workplace, because women of color often must deal with additional barriers and stereotypes when deciding how to respond to sexism.

One of Maya's first jobs out of college was working for a labor union, which she "naively assumed would be a bastion of social values." Early into her first assignment in Springfield, Missouri, someone attempted to run Maya off the road, for reasons she believed were racially inspired. "My manager at the time had me recount the story," Maya noted, "and then proceeded to insinuate that I had misconstrued the situation and that it was important for people to be strong even in the face of difficult situations. I felt disrespected and completely unsafe.”

However, her request to be transferred was approved and she was moved to Kansas City, Missouri, where "I ... had experiences where true cases of harassment were not addressed and just made my own work environment more uncomfortable. [In Kansas City] I had a boss come on to me and make inappropriate compliments about my physique. He tried to take me on dates and would let me off work earlier than my coworkers without my requesting. I was so uncomfortable because he was considerably older than me and the person to whom I reported at the end of the day."

She has since moved on to a different job, but has found that “ in most work spaces as women of color, we encounter microaggressions — the small slights or comments that are based in racist/stereotypical ideology. When you go to a work party that is primarily white, and your coworker asks if the other black people behind you are your friends, simply because you're the only black people at the party and you're standing somewhat near to each other. ... I think the microaggressions are much more difficult to address."

While all of these work situations were quite different, they did share one common quality: the onus was placed on individual female employees to deal with sexist problems. There was other employees or outside forces exerted pressure to make the companies actively change their culture, and become more welcoming to both men and women.

So where does this leave us? Not everyone has the freedom to sue, opt out of sexist workplaces, or take open action about their sexist experiences on the job — for example, the women I interviewed in this article requested to remain anonymous because they either still worked for the company they were describing, or feared professional retribution. How do we survive and recover and grow (and continue to pay our rent) when we continually face challenges that undermine our self-worth and confidence as human beings?

I would argue that being honest about the sexist problems we face at work, and resist the social pressures that would label us "whiny" and minimize the real issues we are talking about, can help us realize that we're not alone. By encouraging all women to share their experiences with overt sexism and microaggressions, we create a community of resistance and fight the taboo that exists about sharing these incidents — and maybe set the stage for real change.

*All names have been changed

More like this
How To Fight For Reproductive Rights, Based On How Much Time You Have
By Courtney Young
Juneteenth Is Now A Federal Holiday — Here's What That Means
By Lani Seelinger and Syeda Khaula Saad
Jujubee’s Humble Reminder
By Sam Ramsden
GIRLI & Q Fell In Love At A Skatepark & Never Looked Back
By Jessica Morgan
Get Even More From Bustle — Sign Up For The Newsletter