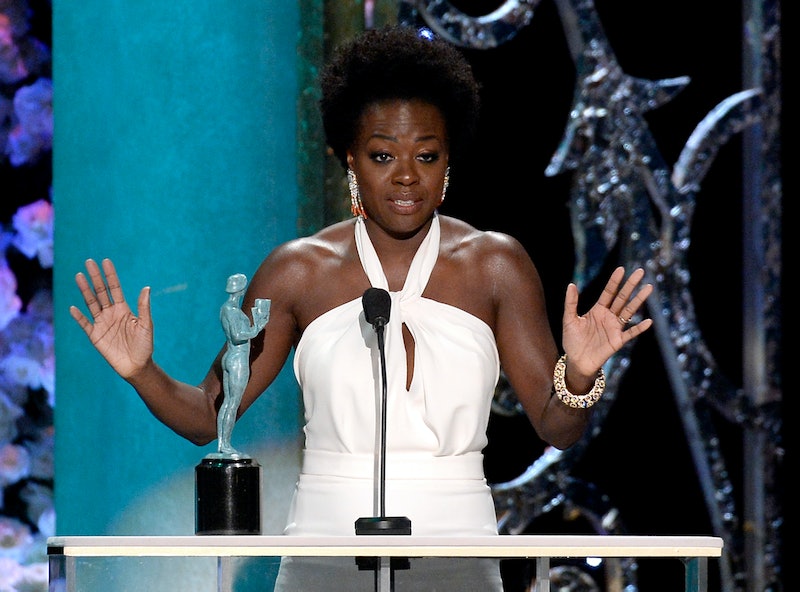 Although the representation for women in film hasn't been that great this awards season, that didn't prevent the females of Hollywood from bringing some major feminist moments to the 2015 SAG Awards. From the cast of Orange Is the New Black winning for Outstanding Ensemble Cast in a Comedy Series, to J.K. Simmons' shoutout to his wife in his acceptance speech, the ladies of Hollywood had a great night at the SAG Awards.

However, the night didn't start out great. First off, E! red carpet interviewer Maria Menounos royally screwed up her interview with Amanda Peet. During the interview, Menounos solely focused on Peet's husband, David Benioff, and his accomplishments (he created Game of Thrones), as well as what designer Peet was wearing. There was no mention of Peet's hard work on Togetherness, you know, that HBO show she is on. Come on, Menounos, you can do better.

But once the SAG Awards actually started, things took a quick turn in the right direction. Minutes into the show, the OITNB cast, a predominately female cast, might I add, was awarded Outstanding Ensemble Cast in Comedy Series, and that right there is huge for women. The show was up against many previous winners filled with largely male casts (The Big Bang Theory, anyone?), but proved to be the series that SAG members voted as best. The OINTB cast is filled with powerhouses in both comedy and drama, so for them to be recognized for their achievement is a huge "hoorah" for women everywhere.

There were also two speeches during the night that stood out for their feminist themes. The first, and possibly more unexpected, speech was delivered by Whiplash's Simmons. In his acceptance speech for Outstanding Performance by a Male Actor in a Supporting Role, Simmons spent time thanking the appropriate industry folks, then closed his speech with a focus on his wife, Michelle Schumacher. Simmons first acknowledged his wife's commitment to being a "full-time mother" to the couple's "above-average children." He then focused on Schumacher's transition to the other side of the camera, where she is "writing, direction, and producing," which he says is awesome because it means more jobs for him. Why? "Because I'm sleeping with the director." It was a great way of incorporating humor while using his time in the spotlight to thank a woman who has undoubtedly had a huge effect on his life.

The second standout speech of the night, hands down, goes to the flawless Viola Davis. Not only was Davis' win for Outstanding Female Actor in Drama Series a huge step in the right direction for more diversity among awards show winners, but if her speech didn't shut down any haters who believe a "49-year-old dark skinned, African-American woman" can't play a "sexualized, messy, mysterious woman," then I don't know what would. Watch the empowering moment below.

Another highlight of the night was the beautiful tribute to Debbie Reynolds as she received the SAG Life Achievement Award. The award, which was presented by Reynolds' daughter Carrie Fisher, focused entirely on Reynolds' amazing career. She has been in so many powerful movies and TV shows since she started in Hollywood in 1948, and it was great to see SAG give her the attention she deserves for a career of that longevity.

While I was glad that the night wasn't hampered by any offensive moments or sexist omissions, it should be noted how easy it is for the SAG Awards to avoid such issues. Because they focus on acting and cast performances, the SAG Awards were one of the few awards shows who didn't snub Selma director Ava DuVernay, since there was no directing category. Hopefully, someone will address DuVernay's inexplicable snub at the Oscars on Feb. 22.

The SAG Awards also likely lacked any glaring jokes because most presenters stuck to the script provided for them (with the only exception being Julia Roberts ad-libbing a congratulatory message to Mark Ruffalo), and because there was no host of the ceremony. Usually hosts, or at least off-the-cuff presenters, will attempt to provide edginess that instead causes controversy, so it's no surprise that the SAG Awards were pretty clean-cut. Let's hope the Academy Awards take a page out of the SAG Awards' success and give the women in Hollywood the attention they deserve, and skip the offensive bits often found at other awards shows.