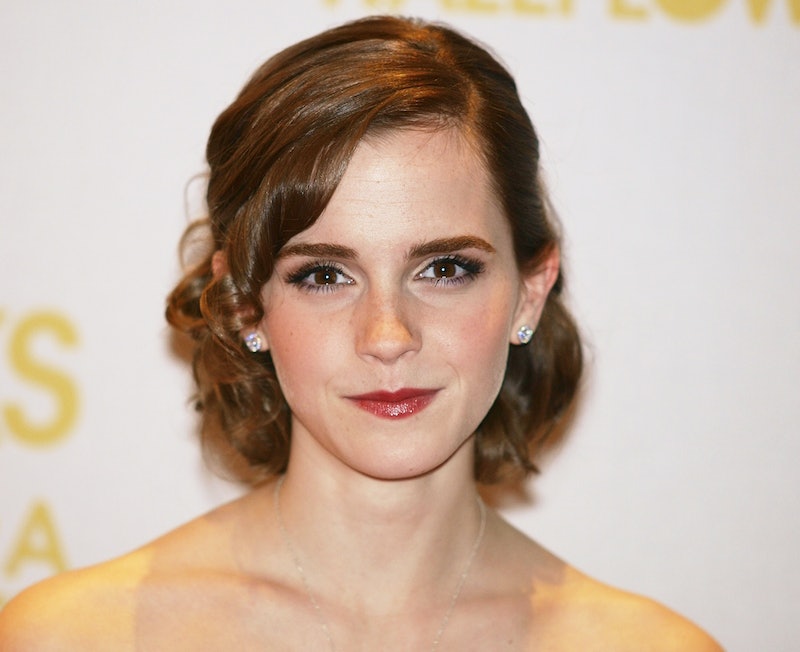 Believe me when I'm saying that I'm sobbing right now. I'm sobbing because Emma Watson was cast as Belle in the new Beauty and the Beast. I'm sobbing because my parents just got home and when they didn't react at the news I screamed "YOU DON'T EVEN UNDERSTAND," as they exchanged looks. And they don't even understand: as a feminist, a child of the '90s, and someone who's been both Belle and Hermione for Halloween, this isn't just a good casting pick, it's a significant one.

Like both heroines, I'm happiest living in the worlds provided to me by books. Not in a bullshit protagonist-in-a-YA-novel way, mind you, in a casually-reading-the-diaries-of-Anais-Nin-for-funzies way. I am that weird girl reading at a party, make no mistake. But like any good millennial, the world I've sought at most, even as I approach my mid-twenties, is that of Hogwarts, where Hermione Granger resides. Although initially Hermione seemed like a nag and an "insufferable know-it-all," we grew together, and I came to love her. The Harry Potter books outlined a great foundation for Hermione, the cleverest witch of her age, someone who's brilliant, brave, and resilient. However, it was Watson that brought her to life.

If growing up with Hermione was emotional, growing up with Watson as Hermione was doubly so. It wasn't just because we had the same unfortunate hairstyle at 11. Not quite. It was more that Watson's Hermione resisted a potentially one-dimensional Hermione-likes-to-learn portrayal. While the rest of us were eating paste, Watson delivered wit and shade with merely a change of enunciation ("It's Levi-O-sa. Not Levi-oSA.")

It didn't hurt that she transformed into an understated and self-assured beauty that could only be half-imagined in the books. When she comes down the staircase at the Yule Ball, exuding more confidence than any 14-year-old has the right to have, my heart soared. "Maybe I'll be beautiful and confident one day," I thought. I'm still waiting on that. And although everything from her hairstyle to her poise was Belle-reminiscent in that scene, looks were always a peripheral aspect of these ladies anyway. It's goes beyond that.

Arguably the most respectable post-Potter job Watson's taken (Perks of Being a Wallflower aside) is her role as a Goodwill Ambassador for UN Women. In the same way Hermione pushed for House Elf rights, Watson has fought for gender equality, starting with an inspiring speech at the UN where she promoted the #HeforShe campaigns. Although cynics may brush this off as the latest in pop feminism, let's be optimistic: How often are the flames of feminism sparked by pop culture?

Which brings me back to Beauty and the Beast, my first favorite film and the site of my spark. The tale of Cinderella hasn't gotten better with age, and I have very negative feelings about that Little Mermaid Ariel, she who traded her voice for a vagina. Pre-Frozen, Belle was the closest thing we had to a feminist Disney Princess. With her head high and her nose in a book, Belle never kowtowed to the norms of a poor provincial town. The ways in which she kept Gaston at bay, shutting down his everyday chauvinism with sass and a firm push in the mud was inspiring to watch.

When toddler Mary Grace put on her yellow dress for Halloween, she wasn't thinking in terms of "I am a strong woman who can dress fierce AND fight the patriarchy." But these days, whenever I crack open my copy of The Awakening late at night, or make calculated plans to not get trapped in my suburb, or tell some guy hitting on me at IHOP to fuck off, I realize it all goes back to Belle.

I don't know 100 percent if Belle is Watson's favorite Disney Princess, but in her announcement she said it was a big part of her childhood, and her "Six-year-old self is on the ceiling, heart bursting." Suffice to say, my 5-year-old self is up on that ceiling waltzing with her. To see two of my childhood role models, ones that were strange but special, makes my heart burst as well. Because that's the thing: in mainstream culture, it's easy to keep re-doing the same "beautiful" damsel in distress, but Belle was never that, and neither was Hermione.

That's why I feel that with Watson, it won't be simply Beauty and the Beast. It'll be Beauty, Brains, Snark, Class, Strength, Feminism and the Beast. And I have faith that it'll be nothing short of magical.

... OK, mom and dad? Can you stop staring at me and just pass the tissues already?

More like this
The 'Spiderhead' Movie Ending Is Nothing Like The Short Story It’s Based On
By Morgan Leigh Davies
16 Novels That Paint A Realistic Portrait Of Abortion
By K.W. Colyard
Ottessa Moshfegh Is Happy To Be Your “It” Girl
By Arya Roshanian
'The Summer I Turned Pretty' Book Ending Is An Emotional Rollercoaster
By K.W. Colyard
Get Even More From Bustle — Sign Up For The Newsletter