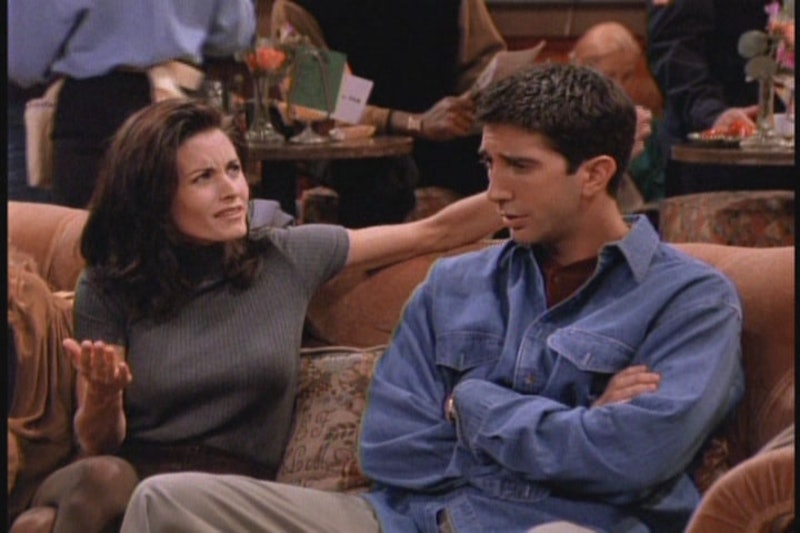 You can blame it on Netflix. Ever since the streaming service added Friends to its queue and gave fans an easy way to binge-watch the show, there's been nothing but trouble for the series and its legacy. Thanks to their newfound ability to watch, pause, and critique any episode of the series, viewers have found reasons to hate on the show, from the un-PC plotlines to the truth about Janice to the many, many plotholes (seriously, what was up with their birthdays?). And it's also showed us a truth no Friends fan wants to confront: the awful way Monica and Ross treated each other as siblings.

Look, I know it wasn't all their fault. The Gellar parents treated their children pretty terribly, placing Ross on a pedestal and, more than once, literally forgetting that Monica existed. It's understandable that the two siblings would have some tension in their later years, but even still, the way they acted with each other was beyond acceptable. From the very beginning of the series, Monica and Ross displayed obnoxious, condescending, and even cruel behavior towards each other, and while they did get along overall, oh, did those two kids have issues. For instance:

Yes, Ross and Rachel are lobsters, and yeah, Chandler and Monica worked out happily ever after. But there was no guarantee that either of those relationships would end up as well as they did, and for Ross and Monica to both risk the chance of dating — and possibly breaking up with — each other's best friends was perhaps not the smartest move. What if Monica hated Chandler so much that it caused some major tension in her relationship with Ross, or Ross couldn't be around Rachel any longer and made things hard on the rest of the gang (oh wait, that actually happened)? Friends could've been very different, and very bad.

As many have noted, there are a whole bunch of problems with the "Fat Monica" storyline, but perhaps the most troubling one is the way Ross treated his sister's weight issues. He took part in those jokes just as much as the rest of the gang, never coming to her defense or even just saying, "hey, guys, maybe we shouldn't say that." Monica's high school bullying and serious health issue was all fair game for her loving brother.

Ratting Each Other Out to Their Parents

I know, I know, siblings do this to each other all the time. But typically, it's only when they're kids, and the secrets are about throwing parties or getting a bad grade. Monica and Ross, however, never seemed to move past this stage, as they continued ratting each other out to their parents well into their twenties and thirties. And as all those who remember season 6's Thanksgiving episode know, it wasn't just small secrets anymore; it was job losses, new relationships, and embarrassing divorces. Ouch.

Monica Not Telling Ross About Chandler

I get that Monica and Chandler were trying to keep their relationship a secret for awhile, but you'd think that telling Ross would just be common courtesy. After all, he was her brother and his best friend; of anyone in their group, he was the one who deserved to be in the loop the most. Yet the couple kept it a secret from him for far too long, resulting in all of their worst nightmare: Ross, in horror, accidentally watching his best friend have sex with his sister.

To be fair, this crime wasn't done on purpose (he thought she was a pile of coats covering Rachel... it's complicated). Yet all the same, the idea of Ross being Monica's Midnight Mystery Kisser is just awful.

Monica Not Taking Care of Ben

Raising Ben was not Monica's responsibility, as he was her brother's son, not hers. But once she saw how absent Ross was from Ben's life, though, wouldn't you think she'd step in and help take care of the poor kid? Except for a handful of episodes throughout the show's ten seasons, Ross was rarely shown with his child, not even when his other kid was born, Emma. Monica should've stepped in and talked some sense into her brother, or at least provided Ben with one relative he could rely on.

It's natural for siblings to be competitive, but for Monica to care so much about winning that she not only pelted her brother in the face with a football, breaking his nose, but proceeded to ignore him and jump into a lake to retrieve the ball... that's just scary.

More like this
Courteney Cox & Jennifer Aniston’s Latest 'Friends' Revival Is Everything
By Darshita Goyal
15 Offensive AF Jokes In 'Friends' That Really Aren't OK
By Tolly Wright, Bustle Editors and Meguire Hennes
Netflix Reveals First Look At Wednesday In The 'Addams Family' Spinoff Series
By Bustle Editors
Kenan & Kel Just Reunited At The 2022 Emmys & Twitter Is Overjoyed
By Grace Wehniainen
Get Even More From Bustle — Sign Up For The Newsletter