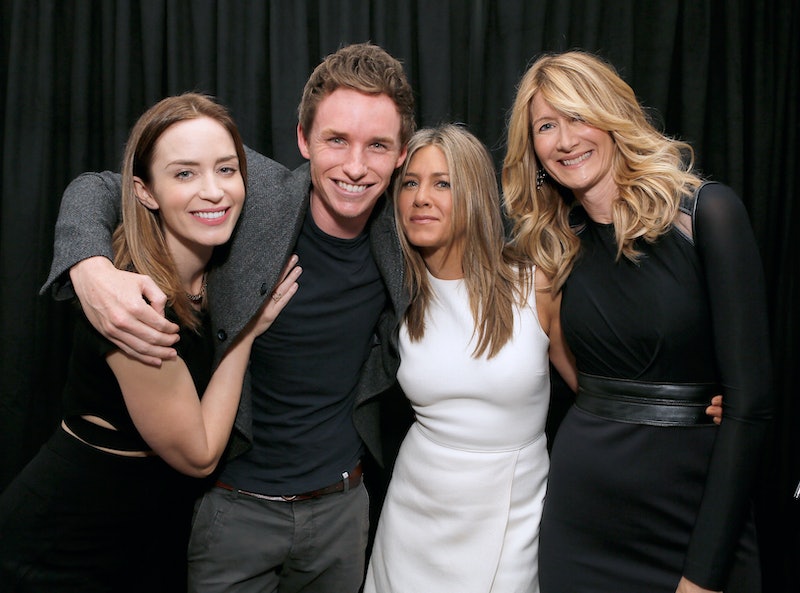 Some people take "I'll be there for you" in literal sense, like Eddie Redmayne stalking Jennifer Aniston with his wife because they're huge Friends fans. The Theory of Everything star told a fun award-season story on Jimmy Kimmel Live! about how he and his wife, Hannah, love the show and made it their mission to meet her. "We saw Jennifer Aniston at a party and we were just incredibly inappropriate. We so sort of wanted to meet her that we just literally stalked about four meters behind her for an entire evening," he revealed. "Eventually I think she was like, 'OK!' So we got to meet her and she was as beautiful and wonderful as you'd expect her to be ... she could've turned around and slapped us for being stalkers."

Maybe Redmayne should have been thanking Jennifer Aniston instead of Bradley Cooper (twice) in his SAG Awards speech. The actor admitted that he always feels this giddy around celebrities, saying, "It's sort of kid in a candy store. It's like all these people who you've long admired." However, I will say that he has tended to steal the show when he's been around other celebrities this award season. When he was on The Graham Norton Show with Anna Kendrick, Redmayne re-enacted his failed Hobbit audition and sang a song from Oliver, and during an interview with Jennifer Lawrence, he revealed his love for Real Housewives and The Hills. Forget Aniston — I just want to hang out with Redmayne.