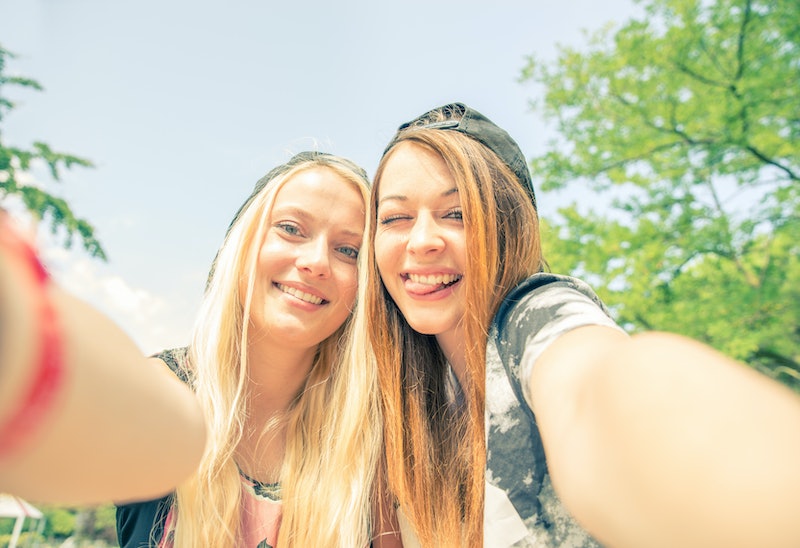 Much has been made of best friendships on the Internet; lists of things you can only tell your best friend or ways you know someone is your best friend can be found on pretty much any website with a lifestyle section. But while mere words cannot express how much I support strong female friendships (Leslie Knope and Ann Perkins forever!!), I've noticed a serious lack in articles discussing the flip side of these relationships. Just like with romantic relationships, sometimes best friendships just don't work out, for a variety of reasons. It can be for relatively quiet reasons, like moving away or plain old growing apart... and it can be because of an explosive, no-holds-barred kind of fight that causes an ideological divide in the mutant community, pitting former bros Charles Xavier and Erik Lensherr against each other. OK, so that's the plot of X-Men: First Class , but my point still stands. Sometimes, BFFs are lacking in the "forever" department. But even though it's a pretty normal part of life, people don't like to discuss ex-best friendships. My guess is that it makes everyone uncomfortable because you generally expect romantic relationships to break up, but somehow ending a friendship is way more personal. When you're someone's best friend, the implicit agreement is that you're in it for the long run — even though relationships come and go, the BFF is supposed to stick around for all of it. Whether that's a fair expectation to place on one person is a whole other discussion entirely, but either way, it makes everything so much worse when the relationship ends. (Speaking of which, still mourning Selena Gomez and Demi Lovato's beautiful friendship.)

<img alt="" src="http://media.tumblr.com/tumblr_m8rvfkHYvr1r25xgk.gif" class="article-body-image" title="Image: http://media.tumblr.com/tumblr_m8rvfkHYvr1r25xgk.gif"/>In fact, having run into my own former best friend a few weeks ago, an experience I would describe as "hideously awkward" at best and "an instant transportation to my painful adolescence" at worst, I've come to the conclusion that ex-BFFs are actually way worse than ex-significant others. Why? Well, I happen to have a list right here...

Unlike with romantic relationships, you're supposed to get over friendships immediately. If you've been broken up with, especially if you were the one dumped, people fall all over themselves to treat you delicately (as they should). But it's a lot harder to explain tearing up while watching It's Always Sunny in Philadelphia because you and your ex-BFF used to marathon it in high school.

2. You can't complain to anyone.

Before, you told your best friend everything. Maybe bitching sessions were even the foundation your relationship was built upon, but now, you're stuck telling your cat about the annoying dude who hogged the weights at the gym. All your other friends would be completely unprepared to hear how snarky you actually get, and you still want to maintain a thin facade of normality.

After a breakup, it's not hard to avoid romantic movies. Avoiding movies about best friends, however, is near impossible, even though every second of Thelma and Louise is akin to poking an already-aching bruise on your very heart and soul. My solution? Repeated viewings of Memoirs of a Geisha.

4. Being in the market for a new best friend is super weird.

Much like a middle-aged divorcee who has no idea how to get back into the dating game, suddenly you're lost in the maze of initiating friendships. Somehow you're way worse at making friends than you remember, because you gave up on worrying about that kind of thing after meeting your ex-BFF in middle school. You thought you were set for life, dammit!

5. It's probably going to be harder to avoid them.

Unless you just grew apart because one of you moved away, chances are everyone else will remain friends with the ex-BFF. The worst part is that you can't even fault them for it. If your friends stay close with an ex, they're the worst, but you can't expect them to drop a friendship just because someone hurt you. That's a best friend's job, and in case you needed another reminder, that position is currently empty.

6. You're not sure how to act around each other anymore.

There's not really a template for how former best friends should act when they run into each other later. With exes, there are plenty of examples in pop culture based on how it ended: if it was a bad breakup, you pointedly ignore them/throw things at their head/loudly inquire about their chlamydia in public. If it was amicable, you're polite, or maybe even friends. With a former best friend, however, all bets are off. Do you ignore each other? Try to stay kinda-friends? Make awkward small talk while secretly wishing to be anywhere else? If anyone figures it out, let me know.

7. It's the end of a years-long relationship.

You may have hit it off right away, but best friendships take time to build. Chances are, you've known this person since you were a child or painfully awkward adolescent, and by the time that relationship ends, chances are you've known each other for years. In contrast, I know several people off the top of my head that haven't ever had a romantic relationship beyond six months. The ex from your two-month fling just isn't as painful a loss as a decade-long friendship.

Even though it's hard, and you might feel like you wasted years of friendship on someone, sometimes best friendships just aren't meant to last forever. The friendship may have ended, but it doesn't discount all the times you stayed up till 4 a.m. watching Nicolas Cage movies, or the lunches spent gossiping about other, lesser friends.Unless your friendship ended badly, of course, because eff that noise. You probably don't need me to tell you, but in that case, you're better off on your own.