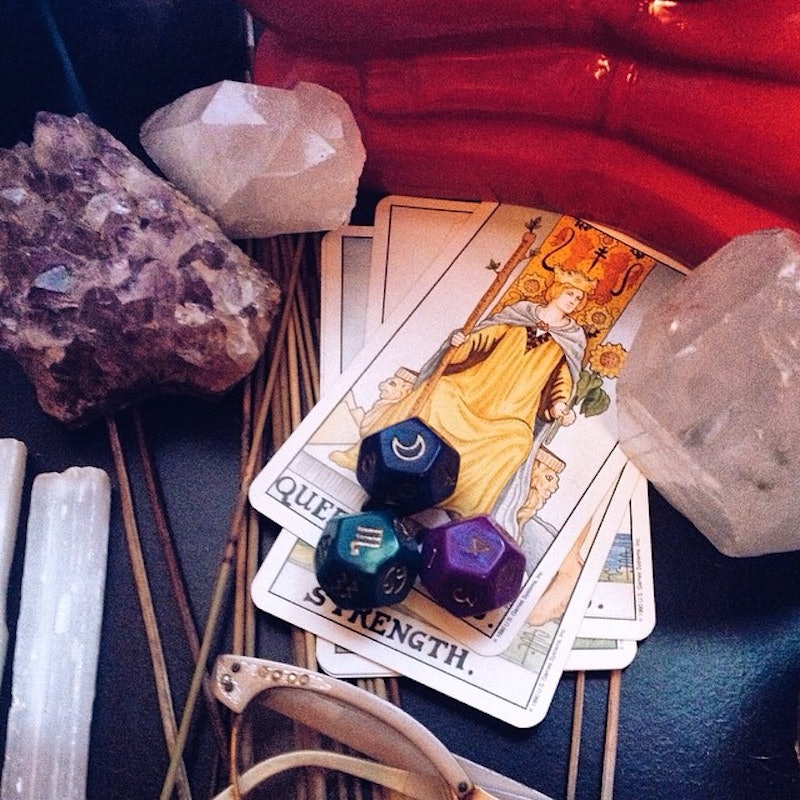 I'm not a religious person, but sometimes I wish I were. Just to have that feeling of being watched over, of knowing that some forces other than reigning chaos and Google analytics are determining my life's course. Isn't there something else I can blame for the fact that I haven't reached stardom on Vine yet, besides my personal failings? Who is controlling this weather? It is very bad.

I came to astrology on the suggestion of my roommate. “Look up Susan Miller,” she encouraged me, in the confident tone of someone recommending a tablespoon of flax seeds in the morning. “It’s just crazy how accurate she is.” Indeed, there is a force that controls our lives, beyond our own free will and greater than Jesus, Thor, and Voldemort combined: The motion of the planets!

The experiment: For the month of January, I decided to live by my horoscope as told on AstrologyZone — I marked down special days in my calendar, took note of planetary shifts, warnings, and encouragements. Could the lauded Susan Miller really be the Messiah I was looking for, a Second Coming from the stars? I wanted hardcore evidence of her magic powers.

The following is a blow-by-blow comparison of my January to Susan Miller’s predictions for my sign, Aquarius. Here's what Susan predicted for me on certain days, versus the real-life results.

From the first sentence of my January forecast, I wanted to believe it.

The Forecast: “It's birthday time, when the smaller, personal planets that orbit close to earth surround you like loving little relatives, hoping that they can make any possible wish you hold in your heart come true,” Susan Miller writes. Excellent. My birthday has always been one of my favorite times of the year, but I didn’t know it was because of this planetary group hug/orgy.

The Reality: Although I am still pretty psyched for my birthday (it's coming up this weekend and I've been planning it for months), it was hard to feel the small planets hugging me and hoping that all of my wishes came true this January. Overall, January seemed like just another month.

The Forecast: "On January 4, the full moon will appear in Cancer, in your sixth house of work assignments." The first thing that everyone had to contend with this year was the full moon on January 4th. Full moons, apparently, kind of just f*ck with everything, like menses, werewolves and so forth. This particular full moon showed up in my work-house, meaning that I’d be flooded with tasks and obligations.

The Reality: Indeed, an employer contacted me that week with an impending deadline, and I had to forego Scandal and updating my LinkedIn page to make it appear like I was more employed than I was in order to finish the assignment. Life is full of sacrifices and challenges.

The Forecast: “Mars will give you courage and drive, and the kind of energy that would allow you to leap tall buildings in a single bound.” Unbeknownst to me, Mars, which from Susan’s description sounds like getting that rainbow star in Mario Kart N64, had been in my house since December. All along, I'd had this secret weapon of success in my back pocket and I had no idea!

The Reality: I learned about this whole Mars thing on January 11th, and it was already slated to leave on the 12th. “LAST DAY OF MARS!!” I wrote in my calendar, as if I was going to do anything about it.

I used the remaining power of Mars to clean my room. Really, it was the cleanest it had been in awhile, so maybe there was something there.

I was getting very excited, though, for January 13th and 14th.

The Forecast: “One of my favorite days for you will be January 13, when Venus will be in perfect angle to your ruling planet, Uranus” (Hahaha perfect angle to Uranus). On these days, Susan makes grandiose claims that this is “a day that is so exciting you can barely contain yourself” full of “gorgeous fireworks.” “You won't expect all the wondrous things that can happen on January 14,” she writes, “so allow the day to unfold as you sit back and enjoy the surprises.”

The Reality: Here, perhaps I just needed to scale back these sweeping predictions to fit the realistic scope of my life. For example, “gorgeous fireworks” for me might actually translate to “meeting a friend at a bar.” “A day of high voltage energy, great chemistry, and excitement” could very well mean “a day when you can get out of bed and speak with more than three human people.”

I spent most of Wednesday the 14th on the Internet. I went to yoga, and went grocery shopping. I made pasta with eggplant and tomato sauce. I watched Scandal. And maybe that was a great day for me.

The Forecast: "Mars will meet with Neptune, a planet that can cause confusion in matters of money, so to be careful, do not have talks on January 19."

The Reality: Heeding Susan Miller's advice, I moved my appointments with both my bookie and the Monopoly Man to the following Monday. I didn't even look at Mint, which is something I avoid anyway because it makes me depressed to know my net worth. I like to leave some financial mystique in the air.

January 20th: A Special New Moon On A Not-Special Day

The Forecast: “This new moon is so special because it will receive such comforting beams from Saturn. Saturn is so very comforting at this angle, and will help you set up a very stable plan for your future.”

The Reality: This day makes me think of the first episode of Serial , when Sarah Koenig talks about memory: “It’s really hard to account for your time, in a detailed way, I mean.” When it came to January 20th, there was nothing that made the day stand out. No new moons, no Saturn. I woke up, went to yoga, got a green juice, sat in a coffee shop, and wrote an article about a cappella for this website. I watched some YouTube videos, and made a stir fry for dinner.

My stable plan for the future? Maybe it's just this boring, risk-free lifestyle that I'm apparently cultivating here.

The Forecast: "Mercury will be retrograde in Aquarius from January 21 to February 11. This means that you will have to deal with delays, indecisive executives, shifting directives, and changing schedules."

I was on the fence about the validity of this planetary mumbo jumbo until Mercury went into retrograde. This apparently just f*cks with everything (though Susan assured me that since my birthday was coming up it wouldn’t change my “steamroll to success”). Things break, commitments fall through. I was cautioned not to make any large purchases, “especially on items that have moving parts,” and not to accept a new job unless I absolutely had to (although Susan does admit, “if you desperately need a job, sometimes we have to act at unfortunate times”).

The Reality: During Mercury’s retrograde, which will unfortunately last until February 11th, I’ve already suffered the following misfortunes: my laptop charger broke, I received a scam tutoring job offer that did not cost me any money but was emotionally taxing, and a blizzard that promised to obliterate New York and with it all of my life problems failed to deliver any apocalyptic results. Go f*ck yourself Mercury.

In desperation, I did take a new job. Sometimes, Susan, we do have to act at unfortunate times.

My conclusion: I’ve started to wonder if Susan Miller’s predictions were correct only when they were negative. I’d witnessed firsthand the truth of a Mercury in retrograde, but where was my steamroll to success? Where were the sparkles on January 14th? Where was Venus, which was supposedly vamping up my love life and making me irresistible to all men from January 3rd to the 27th?

Perhaps Susan had only escalated my expectations to an unrealistic level for an otherwise normal January. Or perhaps astrology is just easier to believe when things are going poorly, like how people turn to religion in the final moments of life, or when Netflix isn’t loading for some reason.

Maybe I just wasn’t doing it right. Maybe I should’ve scheduled an interview on January 27th when I’d be naturally more articulate, due to the juxtaposition of Mercury to Uranus, (which I maintain is still a hilarious word). Perhaps while the planets were busy aligning and retrograding, I needed to do more of the legwork here on earth.