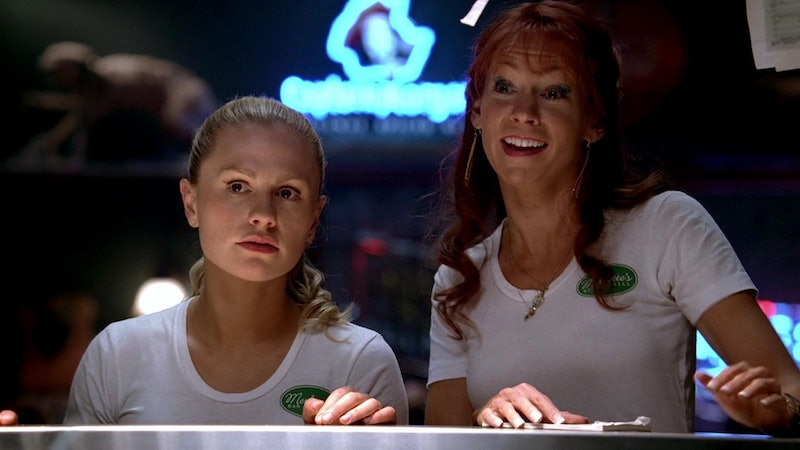 It's been almost seven years since True Blood premiered on HBO. After saying goodbye to the residents of Bon Temps last summer, what's it like to revisit the True Blood pilot now that we've had some time to recuperate after that bonkers series finale? We might as well, since the final season tried to make us remember the glory days of Sookie Stackhouse and Vamp'r Bill Compton. 2008 was just about the height of vampire mania in pop culture. The final Twilight novel, Breaking Dawn had just been released, the first film was about to come out in theaters, and The CW would green light The Vampire Diaries less than six months later. We were oversaturated with fangs back then.

True Blood maintained its place first of all by being on HBO and giving us all the vampire sex scenes that Twilight withheld. You wouldn't need to write a Fifty Shades of Grey-esque fanfiction about True Blood to see your favorite characters do bad things to each other. Just tune in next week! Chances were, the show would deliver something kinkier than you could ever think up. The plot went from crazier to crazier as well. What's it like to watch the pilot after so many twists and turns? One thing that stayed true throughout was the vampire narrative as a metaphor for civil rights in America. We first see Nan Flanagan, an important political figure later on, being interviewed about the Vampire Rights Amendment by Bill Maher.

Everyone is so innocent. They're silly and mess with each other. There's a lot more teasing than I remember in the later, darker episodes. Merlotte's actually seems like a fun place where I would like to go hang out on a Saturday night. What else didn't you notice that first time around, or just seems different in retrospect? I've rounded up a few observations and easter eggs.

Look at the red letters on the convenience store sign. Well, that "E" is a backwards "3," but still. How evocative.

That Dog Is Totally Sam!

The dog shows up after Sookie rescues Bill, licks her and barks at the new vamp in town. Gross, dude! Get it together, Sam. That is not how we deal with unrequited crushes. We also learned in the pilot that Sam is supportive of the Vampire Rights Amendment, though you wouldn't know it by the way he eyes Vampire Bill.

René is Suspicious From the Start

We first see René immediately after Jason is questioned about the murder of Maudette Pickens. That was our clue right there, and we didn't know it. The first season of True Blood was centered around a serial killer who targeted "fang bangers" and turned out to be Arlene's boyfriend, who had gone so far as to affect a Cajun accent and change his name from Drew Marshall to René Lenier.

Also, look at that. He's holding the very thing that will be the death of him — a shovel.

Sookie Has An iPod

Plus a pretty rad speaker set. Bon Temps was never very high tech and time tended to move slowly on the show, so any reminder of the outside world was helpful.

Everyone Calls Each Other "Cher"

It's a Cajun pet name that means "babe," or "dear" and gets dropped quite a bit in the pilot. This was so sweet; I'm sad they stopped doing it in later seasons.

Everyone Also Had Real Jobs

We know Sookie is a waitress with seemingly unlimited sick leave. However, did you remember that Tara worked at a fake "Wal Mart," and quit in the pilot after getting in a fight with a customer and her manager? She got the job bartending when Sam told her to "fake it" as he ran after Sookie and Bill, tail wagging. Back then, Tara's main character trait was that she was too sarcastic to deal. Her flirt game was also not it — remember when she was into Jason? I was always a little sad that did not pan out.

Meanwhile Jason, Hoyt, Rene and Lafayette all have day jobs working construction on a road crew.

Jason reads that, "everyone should have sex with a vampire at least once."

And by the end of the series, everyone has. Sookie's brother read this tip in Hustler, which is fitting because if anyone is going to "read the articles" in a pornographic magazine, it's Jason Stackhouse.

Sure, book fans likely picked up on this when the pilot was released back in 2008. However, I wasn't familiar with The Southern Vampire Chronicles that inspired the HBO series or Charlaine Harris, the author, until after the show premiered. Here, Gran is seen reading Last Scene Alive, part of the Aurora Teagarden Mysteries.

We learn in a later seasons that many of the events in the pilot were contrived. In Season Three, we learn that Bill "allowed" the Rattrays to beat Sookie up so that she would have to drink his blood. We also learn that Claudine was there the night Sookie drank Bill's blood, and that was planned from the pilot — well, in this scene from the unaired pilot that was deleted. Look at her in the shadows there.

Some things about True Blood never changed. Still, it doesn't even feel like the same show without The Newlins, Jessica, Eric or Pam. My favorite characters showed up much later. Thanks for the memories, True Blood, and here's to y'all!