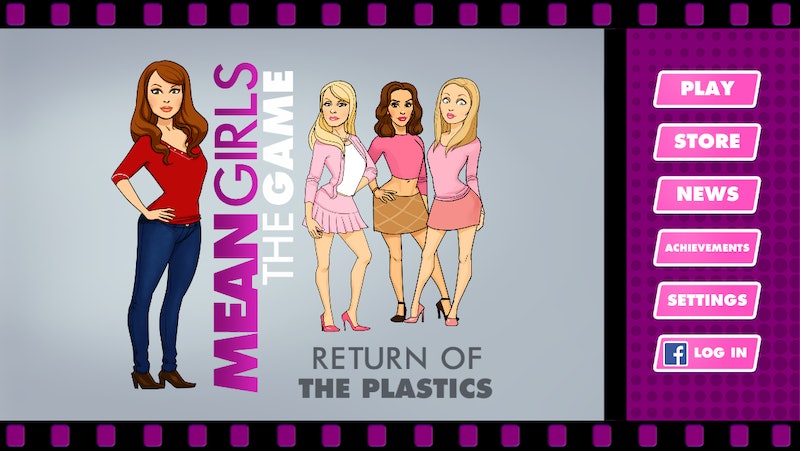 For the past week and a half, I’ve checked the App Store for that Mean Girls iOS game multiple times a day (just like I said I would when I first read the press release. I'm a woman of my word). I couldn't wait to get my mitts on the iPhone game based on the beloved 2004 comedy. Thursday morning, my ESPN or something told me to look at the App Store right away. My fifth sense didn't lead me astray: The Mean Girls game was available for purchase and download. For a cool $3.99, Mean Girls: The Game: Return of the Plastics was mine.

Mean Girls: The Game: Return of the Plastics isn't a Become Famous game or a Deliver a Baby game. It is a Tiara, er, Tower Defense game. The goal of a Tower Defense game is to prevent enemies/goblins/Plastics from reaching a certain point/object on the map. How do you go about preventing the enemies/goblins/New Plastics from reaching a certain point/object on the map? You set up towers around the map to blast the enemies/goblins/New Plastics. The “towers” in the Mean Girls iOS game are not literal towers. Instead, they are representatives from different North Shore High School cliques. The cliques join you in your quest to protect the broken pieces of the Spring Fling tiara from the New Plastics. If the New Plastics get their manicured paws on the shards of tiara, all hell will break loose at North Shore.

I played the game for about an hour. Have yet to beat the game. I'd sum up my experience thusly: Never spend Candy Grams on a school bus.

But why leave it at one sentence? Let's dive in, shall we?

Heeeeeeeey! Janis and Damian and Cady! Gang's all here!

Everything is super chill, y'all.

Her eyeliner is the HEAT.

Heeeeeeeey! Regina and Karen and Gretchen! Gang's all here!

I tried to mimic Regina's pose and my back has yet to forgive me.

Who are these three:

I don't recognize them from the movie.

YEP. NEW PLASTICS ARE HERE TO UNRUIN EVERYTHING.

Fair question, New Plastic. I'd also like to know exactly what would happen if someone super glued the Spring Fling tiara pieces back together.

Luckily, Janis is here to explain what's going on/guide me through the game tutorial:

If the New Plastics get ahold of the 10 pieces of tiara, the North Shore High cliques will be back to what they were before Cady made that Spring Fling speech, i.e., things will be very not chill.

Damn. That tiara sounds wicked powerful. Surprising given how easily it snapped apart.

Wait, just how many New Plastics are there? I thought there were three. Do they have, like, a cloning machine????

Damn. So many New Plastics.

Use that social currency, bay-bay!

Just as I was getting comfortable with the game tutorial, a curve ball showed up:

A QUIZ? NO ONE SAID ANYTHING ABOUT A QUIZ! Wait. Is there only one option? Huh. Easy enough. OCTOBER 3RD! I love this kind of quiz.

What's the point of the Mean Girls trivia questions, anyway? Glad you asked! If you answer the question correctly, it temporarily boosts the fightin' skills of whoever your avatar is standing next to. In other words, it helps you in your fight against the New Plastics.

After the tutorial ended, it was time to look at the map. Gotta see what we're dealing with:

Damian has my back:

Who would I play as? Let's see here. I could choose Regina:

Don't get your hopes up about Janis, either:

What about Aaron? Nah, man:

And as for Kevin? You can probably guess the answer:

Wow. Two whole options. So overwhelming. First round, I picked Regina. And for my allies, I chose the only cliques available: Cheerleaders, JV Jocks, Punks, Drama Geeks, and the Math Team. OK. Let's do this:

I stationed the cliques around the cafeteria and watched them thwart the army of New Plastics. The Cheerleaders threw poison glitter. The JV Jocks threw tether-balls. The Math Team sliced with protractors. The Punks slammed the ground with their guitars. The Drama Geeks aggressively waved scepters around.

Our army is so beautiful.

While the beautiful army did its thing, the pop quizzes kept popping up to quiz me:

Wait, I'm supposed to know the color of the umbrella that was in Cady's mocktail?

No clue. Just going to wing it:

OH MY GOD I GUESSED RIGHT. I RULE AT MEAN GIRLS TRIVIA.

My gloating was cut short, however. I noticed a New Plastic had reached the tiara shard display.

DOWN TO NINE. OK, no more farting around. Eyes on the prize, Rohwedder. Add more clique soldiers!

Alas, it's pretty easy to get distracted from the New Plastics, thanks to quiz questions like this:

AHHHHHH I WAS RIGHT!!! I AM INVINCIBLE!

Once again, my gloating was cut short when I realized I was down to FIVE shards:

I thought I might have a panic attack. Things were not going well.

They were not going well at all:

After the near-disaster that was Level 1, I chose "EASY". Just being honest with myself.

I benched Regina for Level 2 and called in Gretchen. I found working with Gretchen to be an absolute delight. My Level 2 experience can be summed up by three screengrabs.

Gretchen proved to be a great General.

After my 10/10 shard victory, I decided to treat myself. I paid the North Shore Store a visit.

THE INFAMOUS ANFERNEE! Which of these wares would be worth my hard-earned Candy Grams? (And yes, Candy Grams are the currency of the game.)

YOU CAN HIT THE NEW PLASTICS WITH A SCHOOL BUS? CONSIDER IT PURCHA$ED.

I played another round. I waited to use my school bus until the final wave of New Plastics descended upon the cafeteria.

I dragged the school bus out into the middle of the caf and prepared to watch the mayhem unfold.

...Instead, the school bus zoomed across the screen for a split second. Mayhem did not unfold. It was very anticlimactic.

I waited for the school bus to return. It never returned. I was so disappointed.

What a BUSt. Never spend Candy Grams on a school bus.