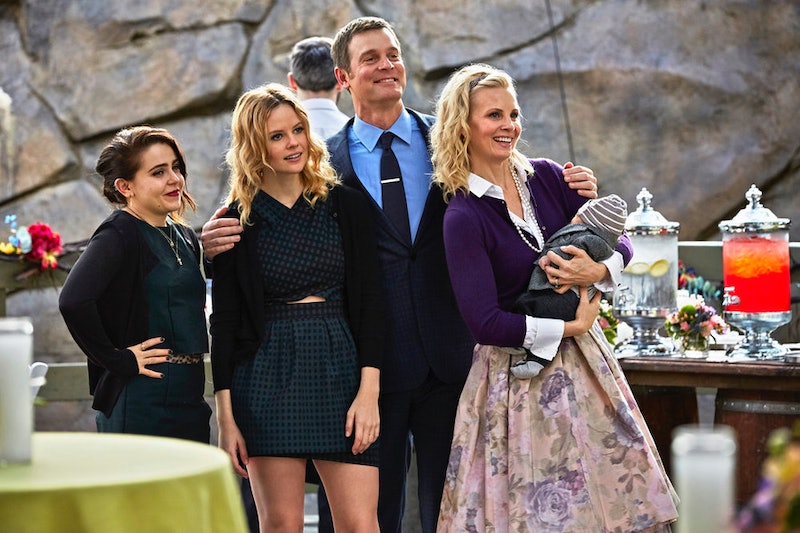 There's no way Parenthood could have properly wrapped up without having the long-gone, but still-beloved Haddie Braverman around. Thankfully, the Parenthood series finale "May God Bless and Keep You Always" brought back the eldest Braverman daughter, and while she didn't get a big send-off like everyone else, she did get a lovely moment with her brother Max.

Haddie rolled back into town to attend Sarah and Hank's wedding, and was met with the typical Braverman mayhem: lots of family members talking over each other. When she tried to connect with her brother Max, he was distracted by his role as the wedding photographer.

Haddie and Max have spent seasons (sorry, years) apart at this point, but the two instantly fell back into their sibling rapport. I've gotta give credit to stars Sarah Ramos and Max Burkholder here. Not only did these two give incredible individual performances over the course of this series, but they were always very convincing as brother and sister who never always saw eye to eye, but loved each other at the core. Haddie and Max were in a family in which siblings got along inexplicably well, so their difficult relationship was a breath of fresh air.

While we barely got a glimpse into Haddie's life now, or even what really becomes of her in the future, the writers did get to a final, important moment for one of the most important dynamics on the show: Haddie and her brother.

After the wedding, Haddie opens up to her brother and tells him that, even though she resented him at times for "being a drama queen" and having all of the family's attention because of his Asperger's, she admitted she was "totally wrong" for feeling that way. She told Max that she was a "much better person for being your sister" and that he is "special and weird and wonderful." While Haddie's speech may not have made him a weeping mess like any Parenthood fan watching did, he did respond in the best, most possible Max way possible to his sister's request to take a selfie: "Selfies are ruining my industry."

I understand why Haddie didn't get ample screen time in the finale, honestly. While I would have loved have had some glimpse into her personal life, she's been outside of the Parenthood world for so long. There's no way in the midst of Sarah's wedding, and Zeek's farewells, and Crosby's career move that the writers could have done a deep dive into Haddie. Some Parenthood fans, however, still wanted more of Haddie before saying goodbye for good. Here's how Twitter reacted to her nice, but very abrupt return in the series finale:

THAT CAMEO, of course, is in reference to none other than Friday Night Lights alum Scott Porter playing Amber's future beau. (That's right, people, Amber dated both Jason Street and Luke Cafferty! Get it, girl!) Heck, I'd venture to say that was an even bigger tease than getting that brief, but nice moment with Haddie.

Since we'll never know what became of Haddie (sigh), let's just imagine that she's living happily ever after with Tavi.