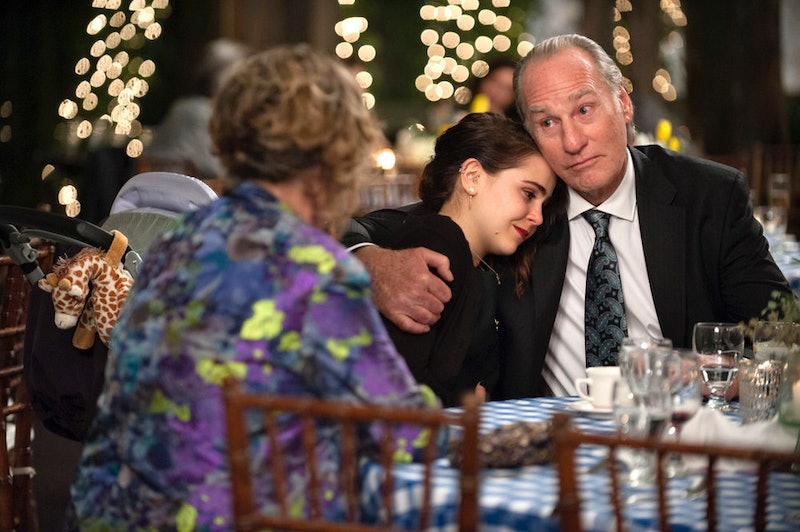 Parenthood fans knew this moment was coming all season long, but that didn't make it any less heartbreaking when it actually happened. Zeek passed away in the Parenthood series finale "May God Bless and Keep You Always," but keeping in line with the theme of the show, it wasn't about the loss or sadness, it was all about celebrating life.

Zeek passed away quietly in his home and got the ultimate tribute from his wife Camille, their children, their grandchildren, and their great grandchildren: a memorial on a baseball field. After spreading his ashes, the Bravermans gathered to play a game in honor of Zeek. There was seriously no better way for the Bravermans to pay tribute to their patriarch, and there was no better way for the Parenthood writers to allow us to say goodbye to everyone. (As we see Zeek's service, we also got flash-forwards to the fate of the entire clan, and hoo boy, even by Parenthood standards, it was a tear jerker.)

Mercifully, we got to spend most of the episode with Zeek. In fact, he doesn't go until the last five minutes of the series. This allowed Zeek (played by the wonderful Craig T. Nelson, who always found the perfect balance of heart and gruff) to have some tender, beautiful moments with the people he loved most in his life.

Hank asked his future father-in-law for permission to marry Sarah, and without hesitation, Zeek gave his blessing and wise words. In one particularly great moment, Zeek begins to tell Hank to "take care of my little girl," but he stops himself and says "my daughter" instead. It was a profound moment of realization from a man learning to let go at the end of his life. This show could be very cheesy at times, but it could also really hit hard when it needed to about the ups and downs of life.

After his conversation with Hank, Zeek had a one-on-one chat with Sarah, who he declared was his favorite of all of his children. Sarah thanked her dad for everything he did for her, and with that, what was perhaps the most wonderfully heartbreaking exchange to ever take place on Parenthood:

Zeek: "Have I been a good father?"

The only thing that even came close to that incredible moment between father and daughter, was when Zeek and Camille opened their home to Amber and her new baby. When Amber worried that she would be imposing on them, they assured her, this would be part of their third act. Amber and Zeek was one of the best dynamics on Parenthood, if not the best dynamic, so it was fitting that they had this great moment.

While it would have been nice if Zeek had had more scenes with his other children in the series finale, but that's not always the way life works. Besides, his closest and deepest relationships were with Camille, Sarah, and Amber, and they got the proper farewells they all deserved with Zeek.