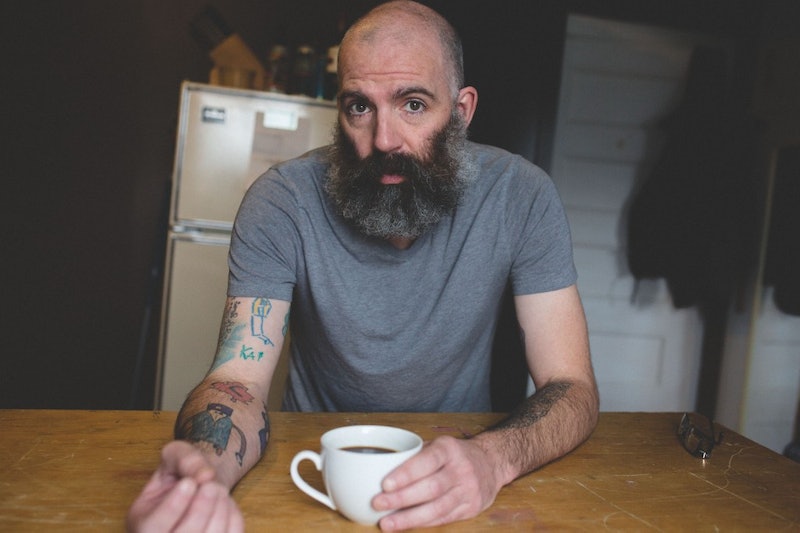 There's a story behind every tattoo, but very few are quite as heart flutter-inducing as the story behind Keith Anderson's tats: Every year, the dad tattoos a piece of his son's artwork to his arm, using his own body as a canvas to show the evolution of his son's doodles as he grows up. Chance Faulkner, the photographer who sat down to interview Anderson about his tattoos, got some insight on their history and captured the stunning images, which he featured on his photography blog.

Anderson said that he first started getting the tattoos done when his son Kai was four years old, and that three different tattoo artists have brought the tattoos to life. So far, Keith has accumulated his son's name, a daisy, a house, a maple leaf with "C" for Canada, a seahorse, and stained glass. According to Anderson, the next tattoo will likely be a sword from a drawing Kai made this past Christmas.

"Recently, my son was there with me and he did some of the tattooing himself. He loves it. No one I know has ever heard of tattooing original kid art before, and it’s a lot of fun. We will keep going until he doesn’t want to do it anymore. At this pace he is still very excited about it, so we’ll keep going. People ask me what will happen if I run out of space; I guess I’ll just get him to draw smaller pictures."

Here are some of the pictures Chance took of Keith and his remarkable tattoos:

And here are the images of Kai helping in the tattoo parlor:

You can also find Keith Anderson on Twitter here.