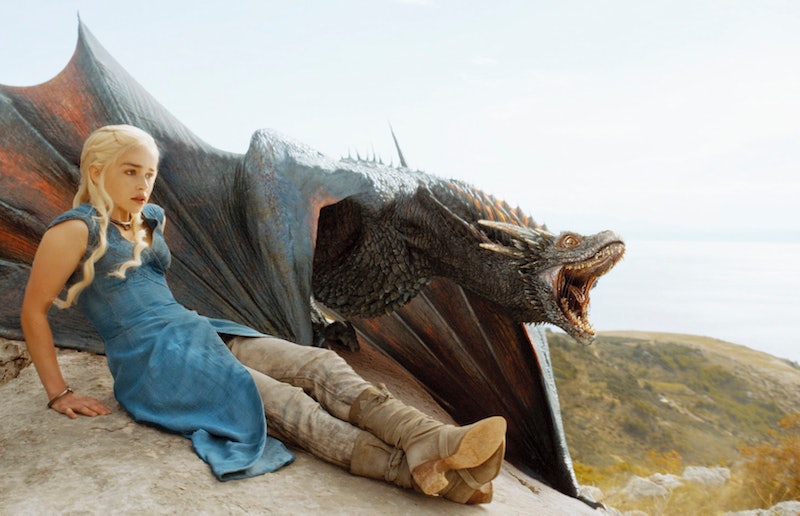 Though the new Game of Thrones season 5 trailer was just released (and, for the record, it's enough to sate any fan's longing for new GoT — at least for a few minutes), there is still a lot of time until the season actually premieres on April 12. Sadly, though, the news of a new trailer being available is a bit overshadowed by the GoT news that followed: Unfortunately for those of you dedicated fans who were looking forward to perhaps passing the time by reading a new installment of the book series that GoT is based on, A Song Of Ice and Fire, author George R. R. Martin announced today that he will not release the newest installment of the series, The Winds of Winter, this year, as was previously anticipated. For context, this setback is kind of a major one: The previous book was released all the way back in 2011.

So, GoT fans officially find themselves facing a major problem: There won't be a book for a whole year, and there won't be a series for a few months. However, Westeros fans have plenty to do in the meantime. In fact, there's a vast and dedicated fandom that understands you need more than what HBO and George R. R. Martin are giving you! From products to reading material to activities, here are a few ways to sate your hunger for all things Game of Thrones while you wait.

It's a brief cruise in Ireland that takes you to a lot of the major filming locations. Don't lie: Of course you want to go. Check it out.

If you are craving the elaborate fantasy of Westeros but are done reading all of the books, Flavorwire has listed some other book series that are similar to GoT to cure your craving.

Buy some Game Of Thrones cosmetics.

Yes, they exist, and yes, there is a Red Wedding lip gloss. The company also has a lot of other perfect and nerdy cosmetics, which you should definitely check out.

Listen to the audiobooks.

Even if you've already read the series, listening to the audiobooks can help you focus on sections that you might have skipped over (like Bran's...raise your hand if guilty of this, I won't judge). And, if you love the TV series but have never been able to read all the books, you can listen in the car or while cleaning your room. It's hours and hours of excellent entertainment!

If you choose this often times hilarious option, however, be warned: Fanfiction can be a strange and dangerous world to venture into. Luckily, Salon has compiled both some good ones and some weird ones.

It's never too early to start planning your elaborate Khaleesi outfit! After all, finding the perfect bleached-blonde wig is going to take time.

It may be considered nerdy by many people, but who cares what they think?! Look, when it comes to Game of Thrones, it's best to just embrace it — and this game is sort of awesome. Check it out.