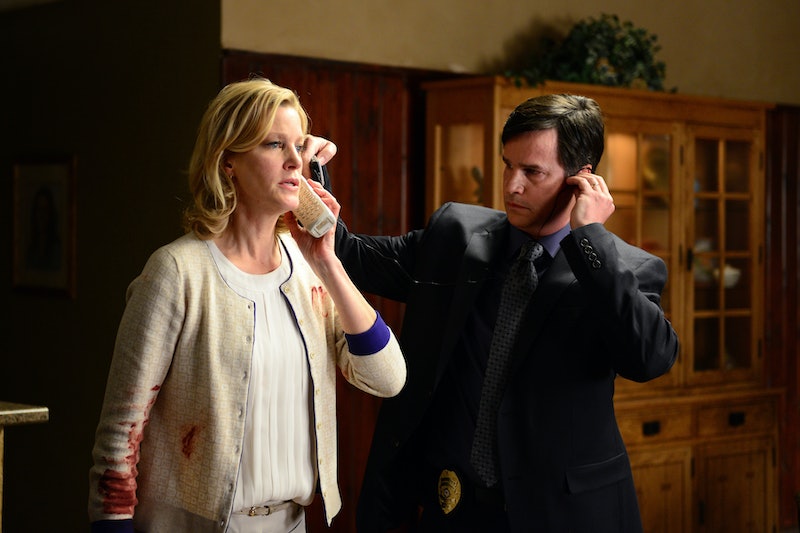 We can talk for days about the importance of Skyler White. We have. We could go on for years about the importance of Skyler White. Breaking Bad as a whole, as we're sure you've read approximately 800,000 times this week alone, is much more than the story of one man's descent into his own ego through the drug trade. It is a story of relationships — both with yourself and others — and a depiction of the destruction and degradation that can come when those relationships turn (or reveal themselves to be) abusive. No one knows this better than Angie Aker — Tumblr user Angieup — who took to the site with a personal essay outlining how Breaking Bad helped her realize her relationship could easily be on the road to abuse.

Those who've seen third-to-last Breaking Bad episode "Ozymandias" know that it is a masterwork in television — and one whose climax pivots directly around the emotionally abusive impulses of Walter White against his wife and children. Months of warning signs had passed in viewer Aker's relationship, but it was one particular Breaking Bad scene that proved her breaking point:

[Warning: Spoilers for "Ozymandias" lie below]

In this episode, Walt’s world was crashing around him [...] A big struggle ensued with them rolling on the ground and the teen son, crippled with cerebral palsy, got between them. This was a triggering scene for me by itself because of my past relationship with an abuser. The next part of the scene was their son calling the cops and Walt running out the door — but not by himself. He grabbed their infant daughter on his way out. Skyler runs after him and tries to get the baby back, to no avail. It was at this point that the pivotal moment happened.

Ahmet shouted at the screen, “That’s what you get, bitch!”

As she writes next, she and her son were stunned, and it changed the very core of how she saw her relationship. "I looked at everything he did over the next few days with new eyes," she writes. "I examined everything he’d ever done in our relationship with new eyes. I pulled out all those flags that had been accumulating in the storage of my brain and reviewed them."

Her conclusion? That this man was not good for her, and that it needed to end.

If I had any doubts about where that relationship might have headed, the post-breakup behavior erased them. I learned that I still have some very real vulnerabilities when it comes to dangerous relationships and until those are resolved, eight more years single is probably not a bad thing.

Aker's story is an important one on about a hundred different levels. First and foremost, it is the story of a survivor of abuse standing up and declaring that she will do everything in her power to not find herself in a similar situation again. Those are always, always important voices to hear.

I got into a Twitter fight today with a man who responded to a Bustle article by calling Skyler White a "harpy shrew." This interaction had nowhere even close to near the personal impact Aker's story has on her life or anyone else's; they're not really comparable at all except for in that they underscore my conviction that Skyler White's story is an important one. She is a complicated woman, certainly not liked by all, whose journey throughout Breaking Bad is a harrowing look at the ways in which emotional (and, in a couple of instances, physical) abuse can chip away at a person.

Aker's ex is a member of a very loud, very adamant group of people who see Skyler White not as the impeccably interesting, complex woman that she was written and acted as, but as the shrieking bitch who deserved everything that Walter White gave her. This mindset does not exist within everyone (thank god), but it became so pervasive that Anna Gunn took to the New York Times to write about the issue.

For Aker, her boyfriend's reaction to "Ozymandias" was a litmus test, the results of which helped her to realize he was not the kind of man she wanted to be with. Whatever Breaking Bad did or didn't do, whether you did or didn't love the finale, there's no denying the value in a story that so fearlessly depicts the psychological implications of ongoing unhealthy relationships and the people who find themselves stuck in them.

Thank you, Breaking Bad. Thank you, Vince Gilligan, Bryan Cranston, Aaron Paul, Anna Gunn, and everybody involved in making this show. You created a mirror that reflected something I really needed to see, and that’s the kind of impact incredible writing can have on people’s lives.

You can read the rest of Aker's story here. If you ever find yourself in a dangerous relationship, we suggest you take the advice she ended her essay with:

Are you in a dangerous relationship, or think your relationship may be headed that way? Trust your instincts. Here is a website and number that can help you. Please choose yourself and choose safety. Nobody’s love is worth staying in a dangerous situation.

Note: This post has been updated since its original publication, and now credits Aker's full name with her full permission.

More like this
What Makes A Sally Rooney Sex Scene So Hot?
By Samantha Leach
Here’s Everything Coming To & Leaving Netflix In June
By Alyssa Lapid
'Heartstopper's Kit Connor Revealed His Hopes For Season 2
By Nola Ojomu and Sam Ramsden
Conversations With Friends' Endometriosis Scenes Are As Brutal As It Gets
By Ivana Rihter
Get Even More From Bustle — Sign Up For The Newsletter