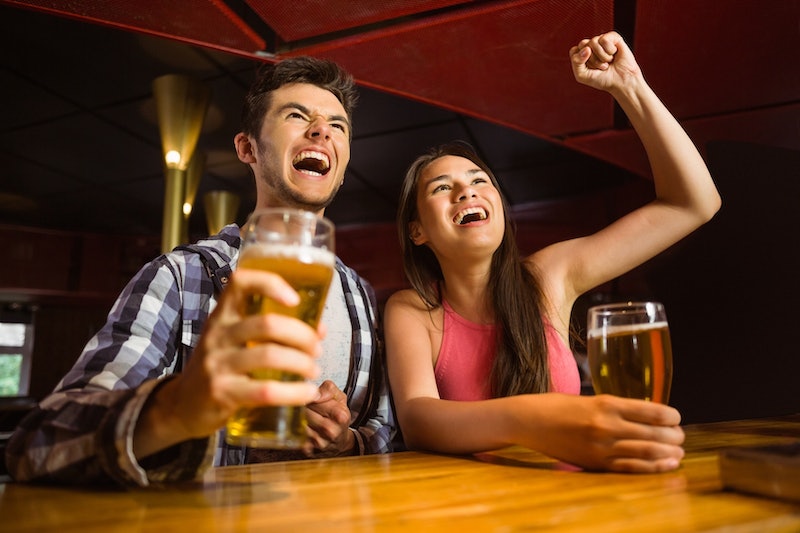 Beer, excitement, rivalry, and close quarters — Super Bowl weekend sure sounds like a recipe for touchdowns of a romantic kind, and football fans are not letting the opportunity go to waste. As the city gears up to host the Super Bowl 2015 game between the New England Patriots and the Seattle Seahawks, Tinder swiping in Phoenix has increased by 50 percent as compared to usual traffic, suggesting that Super Bowl hookup is apparently a thing (although now more Internet-facilitated than it probably used to be).

This fairly interesting bit of news, originally reported by The Hollywood Reporter , has a predictable downside, however — there are 64 males for every 34 females using Tinder within 20 miles of Phoenix this weekend. This is far worse than the 50/50 ratio you expect in the population at large, and even worse than Tinder's ordinary baseline ratio of about 60 men to 40 women.

Messaging on Tinder in the Phoenix area is also up by 60 percent as compared to normal. While THR guesses this might have something to do with Tinder users trying in earnest to get to know each other and to connect outside the app, I'm skeptical. It's just as likely that people are engaging in a bunch of trash talking and idle sportball-related chatter — people who are big enough fans of their team to travel to the Super Bowl in another state are likely wearing some of their team's swag in their Tinder pictures, inviting comment from other sports fans.

For those of us observing this sociocultural phenomenon from the sidelines, I have a suggestion: although it looks like my previous favorite source of terrible Tinder encounters, Tinderlines, seems to be on a hiatus, the Tinderfessions Twitter account is going strong. Be sure to check back after the weekend for some amusing (or depressing) Tinderfessions tales of football and romantic misadventure, because based on those Tinder stats, there are bound to be plenty of fumbles.

More like this
Hinge's New NFAQ Feature Is Demystifying Queer Dating
By Emma Carey
9 Unmissable Moments To Relive From The Commonwealth Games
By El Hunt
The Best Time To Date After A Breakup, According To Experts
By Bustle Editors
How To Change Your Twitter Handle
By Emma Carey
Get Even More From Bustle — Sign Up For The Newsletter