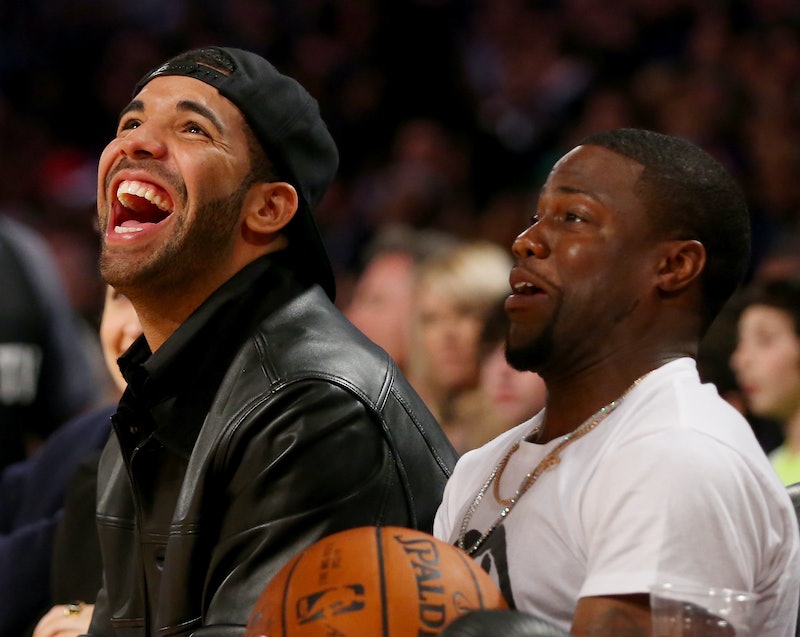 Not a week goes by without a worse- and best-dressed list, featuring a roundup of celebrities triumphs and fails in style. Lately the fashion world has been distracted by Lenny Kravitz' blanket-scarves and Taylor Swift's belly button, so much so that rappers have decided to call out the latest fashion blunder committed by the funny man himself, Kevin Hart. As he prepared for Superbowl 2015, Hart took to Instagram to post a picture in a leather, pullover vest number that has left Drake feeling some type of way and turned other celebrities into up-and-coming fashion critics.

The vest in question, donned by the comedian, is complemented by two silver, chained necklaces, skinny, distressed jeans and black sneakers. There's no doubt that the vest is indeed questionable, from who designed it to whether or not Hart just wanted to show off his biceps, but one thing is for certain: Drake does not approve. The rapper, better known as @champagnepapi on Instagram, reposted Hart's outfit, summing it up with the hashtags, #PleaseTellMeThereAreOtherOptions #ThisIsABillBellamyFit #BalmainWillNotHireYou #ThisManIsOverlyLit. Yes, it was just that bad. Next up was rapper Meek Mill, who suggested that maybe someone should start a petition to get Hart to take the shirt off (also, the comedian being from Philly apparently makes his wearing of the shirt even more unacceptable). Of course, every fashion critique comes with a rebuttal, and unlike other celebs who accept the worst-dressed lists along with the best, Hart has decided to step in and defend his style.

The leading man in the newly released The Wedding Ringer flick took to his account to post a video declaring war against his fashion critic frenemies, saying that they have committed social media suicide. And, with Hart's weaponry of puns and one-liners, these rappers hooks and beats won't stand a chance.

Of course, this is all fun and games between the Hart and Drake, who often trade antics with each other on the photo-sharing app, but Hart has definitely left followers in anticipation of how he plans on getting Drake back. Clearly, nothing will ever be the same (pun intended).