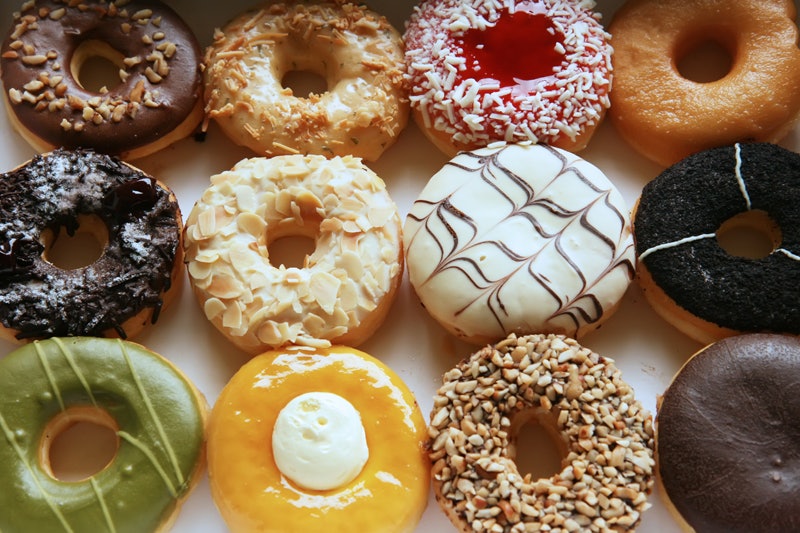 If I told you that a Pop Tart-stuffed donut existed, what would you do? Would you jump for joy? Scream in horror? Shrug and carry on with your life, knowing that in the grand scheme of things, the existence of such a pastry has no bearing on your life? Well, whatever your reaction, guess what? It's a real thing. OC Donut Bar in San Diego has actually taken a Pop Tart and lovingly encased it in a sweet, donut-y shell. Me? I kind of think it's the greatest thing ever: Jam, shoved in a pastry, shoved inside another pastry. It's Inception, donut-style. What's not to love?

Alas, I live just about as far from San Diego as is humanly possibly to without leaving the country, so I've never had the opportunity to experience OC Donut Bar; from what I can tell of the place from its menu, though, it's pretty much the Crumbs of donuts (minus the whole closing down, then opening back up again under new management thing). It's become a trend for donut shops to dream up the most over-the-top treats they can think of; not all of them sound all that appetizing (hey there, cheeseburger donut!), but OC's do: Cake batter donut? Yes please! Mexican hot chocolate donut? Sold! Root beer float donut? Why the heck not! Given their adventurous-sounding menu, therefore, it's probably not surprising they've constructed something like the Big Poppa Pop Tart Donut — which, by the by, is the official name of the pastry in question. Makes sense; I dig it. For the curious, it looks like this:

There's a stark divide on how people view the adult consumption of Pop Tarts: Some embrace it wholeheartedly, while others believe that once one reaches a certain age, they should be left behind with the scraps of one's youth. Donuts, though? Donuts are permissible as a tasty treat no matter what age you are, so I like to look at the Big Poppa Pop Tart Donut as a sneaky way to indulge your inner child while still maintaining a relatively grownup exterior. No one has to know that your indulgent pastry holds within it the stuff of which childhood dreams are made. Shhhhh. It's a secret. OC Donut Bar's menu changes daily, though, so you might want to check up on it before you get too invested in the idea of trying one.

While we're on the subject, though, is anyone else curious about what other kinds of breakfast treats might one day make their way inside a donut? I'd be willing to try any one of these options:

It might be a little overly doughy, but I think it's still worth a shot.

If there's anything that would cause more of a furor than the Cronut itself, it would be a Cronut jammed inside an actual donut.

It's an entire breakfast in one easily consumed package.

I was originally going to go with home fries here, but then I decided that tater tots might suit the purpose better — they're a little less dense.

Bonus points if it's a Belgian waffle.

I don't care what anyone says; I still love Toaster Strudels. I would imagine the flaky pastry crust would take the essential idea of the Pop Tart donut to the next level.

It could happen, right?