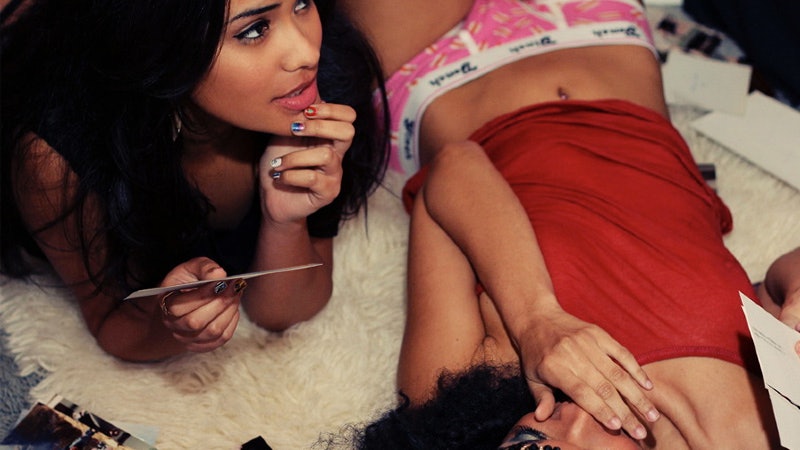 Like many people, I have mastered the art of staying in at night and not doing anything productive with myself all day, and have had this routine down pretty much since high school, when an over-abundance of school work combined with social and family pressures to result in me needing to spend occasional long periods of time being as lazy as possible. This would be a necessity that would follow me well into adulthood. I know, I know, I'm an impressive specimen, but I can't take all the credit: None of those gloriously lazy nights would have been possible were it not for my fellow lazy friends who acted as enablers and cohorts for all of my monumentally lazy days and nights.

In college, I saw my best friends in sweatpants and pajamas so often that I sometimes forgot what any of us looked like in real clothes; I sometimes failed to recall moments that didn't include us digging ever-deeper indentations into the cushions of my couch. It's not that we never went out, because we did occasionally hit the town (mostly in search of grilled cheese, but still), but as fun as going out was, it was never quite as awesome as the lazy nights we spent together. When you're out, you are distracted by everything around you and any talking usually requires shouting, but when you're in the comfort of your own apartment (or dorm or parents' house), you have all this time and space to ramble about whatever thought pops into your brain. As a result, you end up having a lot more intimate one-on-one conversations with your BFFs about life and food and all the other things that matter most.

Here are the conversations you always have with your friends when you're having a lazy night at home:

An hour-long conversation about what food you should order in

This would be a five-minute conversation in any other time, but since we ushered in the era of GrubHub and Seamless, ordering in food has become a legitimate ordeal. Technology has given us TOO MUCH POWER.

Every office has "that guy" or "that girl"—that pretentious little douchenozzle who takes all the credit for everything, whether or not they should, and who acts really smug even though they do basically nothing to actually contribute. Or maybe it's just some jerkface who seems to be on a constant mission to make you look bad. You can't rant about them at work, obviously, but this is what lazy nights with friends were invented for. After all, if you don't rant about them to someone, you're going to freaking explode. That's just science.

Don't lie: You have one. We all have one (at least one). Maybe it's their wit or how cute they look in every goddamn picture, or their smart commentary on current events, or just the aura of their social media presence in general, but there you are, lurking on their profile again. Somehow, having your best friend there to validate your crush on a human being you've never actually met makes creepily "favoriting" their tweet two seconds after they post it seem at least 3% less creepy than it otherwise would. It might not make "sense" to have a crush on someone you don't know in real life, but these are our times and these are our struggles. The Friends' Night In is a safe space to explore these shameful feelings.

Complete silence for 10-15 minutes after the delivery food arrives

A well-formed spoken essay complete with thesis, intro, middle, and ending on the important issue of why [insert actor or actress’s name here] is the shit

If the issue of celebrities emerges in the evening's conversations (and it will because duh), it is unavoidable that one person will feel obligated to let all the other people present know exactly why their feelings are wrong about...whomever. If "Andrew Garfield And Emma Stone 101" were a college class, I'd already have the entire semester's lesson plans locked and loaded. And I, in turn, have been schooled hard in the merits of Kristen Stewart and Ryan Gosling. (In my defense on that last one, I had not yet seen The Notebook or pretty much anything he'd been in at that point and I DIDN'T KNOW ANY BETTER.)

HAHAHA, social interaction. They're all probably wearing pants, too. Suckaaahhss. Poor, pathetic little pants-wearers with their need to "go out" and "live life" and "breathe fresh air". You're so much better than they are. *Chugs cheap beer, drops crumbs on shirt, doesn't bother wiping them off*

Arguably the best part of these nights is when the conversation inevitably drifts in this direction. You might have thought you heard every impressive/cringeworthy sex story in your friends' repertoires but, without fail, there's always one more embarrassing nugget you've forgotten to share with each other, and even if there isn't, the same awkward and terrible stories of your sexcounters will never get old.

Long analysis of your past relationships

I don't think friends do this because we're all secretly pining for our exes or anything like that. Sometimes when friends obsesses about their past relationships, they're happily in a relationship with someone else, or they're feeling genuinely awesome about being single. I think a lot of this is a compare and contrast exercise: "Oh, you also dated a guy unreasonably obsessed with playing "Wonderwall" because he knew three chords? What are the odds!?" and so on and so forth. And often, we bring up our exes during lazy nights at home because, even if we're over the relationship, we're not ever over laughing about how insane he or she was.

Nobody understands or is more accepting of your bi-monthly mini-meltdowns than the friend who is also enduring them, and it is comforting that "that friend" is actually "most of your friends". Lazy nights are perfect for sharing it all of the gross existential angst in a space free of judgment, where you can really dig into all those messy thoughts that we can't really think about during our regular, busy lives.

Life-affirming pep talks with each other

The drunker you are, the more emphatic you get. But with or without alcohol on your side, the message is loud and clear: You and your friends all think each other is a rock star, and you'll be there for each other until you feel like one, and you'll never abandon each other if you actually become one.

Is it tomorrow yet?