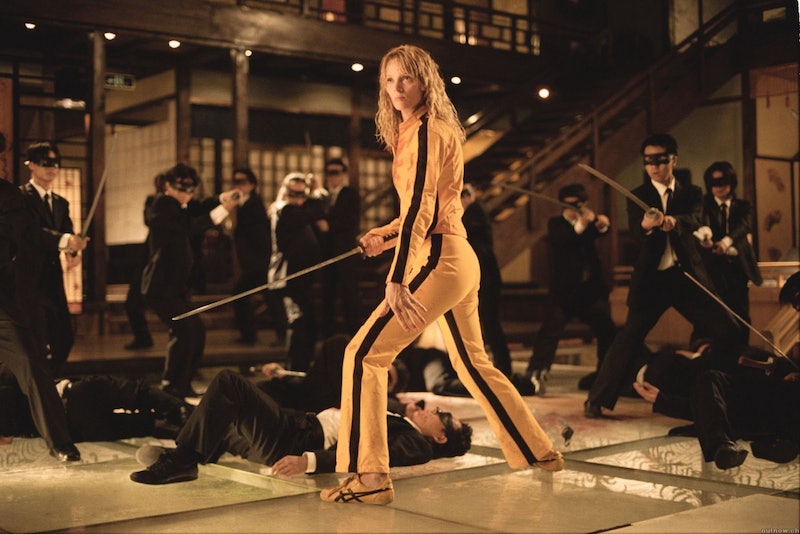 Valentines Day is probably the most divisive holiday of all, and if you're routinely single like me, it's usually another bitter opportunity to stay glued to your Netflix account. Let's be real, for some of us, Netflix IS our Valentine, our only true love in a world of idiots. But, if that's the case for you, I'm going to go out on a limb and say you're not looking to sink your teeth into some Nora Ephron rom-com this year.

Well, you're in luck. Earlier today I patrolled Netflix (read: double-checked to see if The Sisterhood of the Traveling Pants was streaming yet, and it wasn't) and came across a variety of films that feature ladies that likewise aren't prioritizing romance. Maybe you're boiling with anger because your boyfriend left you for an 18 year old Fine Arts major named Dylan. Maybe you and your best friend need a break from Facebook engagements and reruns of Spongebob Squarepants. Maybe you're just looking for something (not someone) new. Whatever the case, I've got you covered.

Here are some female-fronted films for every type of girl, and every level of bitterness you may be associating with this emotional assault that we call "Valentines Day."

If you love fantasy and the dashing men of Disney movies, but are skeptical about Prince Charming...

Watch Labyrinth. It's whimsical, it's odd, it has David Bowie — who you can never go wrong with — playing a scoundrel Goblin King. Not going to reveal the entire plot, but said character has an affection for the protagonist Sarah, and, despite Beauty and the Beast-style ballroom dancing, she's all, "Nah, I'm 15, though."

If you love your mom and feel like crying your eyes out...

Watch Steel Magnolias. It's a highly emotive film with a stellar ensemble cast of strong women. True story, my best friend Shelby was named after Julia Roberts' character in this film.

If you have deep-seated rage about your ex-boyfriend...

Watch Kill Bill (Volumes 1 AND 2). Not only is The Bride one of the most badass female warriors of modern cinema, but the entire premise is literally about her hunting down her ex-lover and the people who betrayed her. Let this bloodbath pacify your anger for a solid four hours, and then save the rest for your therapist.

If you have a preoccupation with being single and fabulous...

Watch Breakfast at Tiffany's. Ok, ok, some of you are side-eyeing me here because there's a romantic subplot woven throughout here. Just a reminder, the novella heavily implied Paul was gay and Holly was an unofficial call girl, so originally there was None of That. But, even underneath all the Hollwood trappings, Breakfast at Tiffany's at its core is about a free spirit who uses her flirtatious charms to get men to buy her outwardly glamorous trappings all the while concealing a sublimated sadness. She does what we all do today with Instagram filters and emojis. And, if you don't watch the last five minutes, it's a whole-hearted rejection of actual love, and we could assume that Holly continued living a bedazzled hard-partying lifestyle. Also, it's pretty.

If you prefer Halloween and the company of your girl gang...

Watch The Craft. There's nothing like a bunch of boss witches to help you strengthen the bonds of friendship between your best bitches. Or not. It kind of didn't work for them. WELL, anyway, just watch it. It's perfect '90s nostalgia for the alt-Tumblr set.

If you and your best friend are the only ones from your high school who aren't married or pregnant...

Watch Romy and Michelle's High School Reunion. While there are tinges of romance in the movie, it's really about BFFs coming to term with their own theoretical adulthood. It's perfect for when the two of you are sharing Barefoot wine, claiming you have YEARS left to be youthful, and trying to figure out how Tina "Trollface" Salsano is engaged to a f***ing lawyer.

When your best friend is 8 hours away and has a live-in boyfriend so you're stuck eating Doritos by yourself as you try to "figure it all out"...

Watch Frances Ha. Like you and me, Frances is #undateable and flailing to make it on her own. If you've ever had a living situation fall through, a friendship grow apart, or a credit card declined, it's really a must-watch. It's neither truly sad or truly happy, like life itself, it simply is.

More like this
Jurnee Smollett’s Heart Is Healing
By Rebecca Carroll
Everything You Need To Know About The 'Knives Out' Sequel
By Grace Wehniainen
What’s New On Netflix: 'Stranger Things' & 'Mean Girls'
By Arya Roshanian
Anya Taylor-Joy Might Be Engaged To Her Musician Beau
By Jack Irvin and Sophie McEvoy
Get Even More From Bustle — Sign Up For The Newsletter