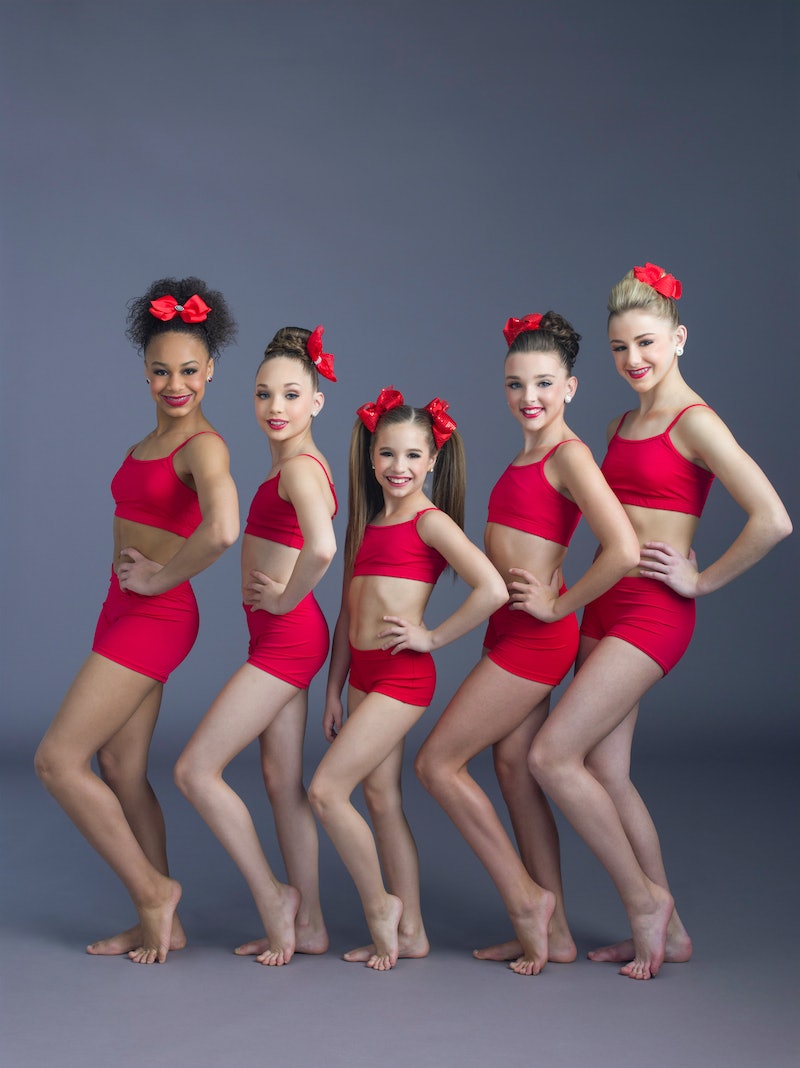 The Abby Lee Dance Company's big move to Los Angeles is finally happening on the Feb. 3 episode of Dance Moms. The Moms have been getting geared up, so what other projects do the girls on Dance Moms have going on? The main point of moving to Los Angeles is to give the girls more exposure and more opportunities to make careers out of their dancing. Abby Lee Miller considers herself to be the girls' agent and is working on getting them fame.

Dancer Asia Monet Ray already has her own spinoff show on Lifetime (Raising Asia) and hasn't been on Dance Moms Season 5. And obviously, dancer Maddie Ziegler is tearing it up, mainly with the help of musician Sia — and her own tremendous dance talent. But besides the Sia music videos and performances (which are awesome), Maddie is going to be on Disney channel's Austin & Ally.

Maddie has always been Abby's shining star, but the entire ALDC is headed to Los Angeles, so what are the other dancers up to? Some of the girls have been getting more exposure than others (kind of just like who gets the solos on Dance Moms — eeee). I hope this move to Los Angeles really brings the girls all of the success they seek with their crazy talent (even if I don't really want to see the Moms get that satisfaction because of their antics).

So here is what the Dance Moms girls— other than Maddie — have going on outside of the ALDC.

Nia's mom Holly is constantly talking about how little attention Abby pays to Nia (and it's sadly pretty true). Nia released her own app called Nia's Nation. But don't think that Nia and Holly will stop there when it comes to making Nia a famous entertainer.

Abby has a lot of faith in Kalani in becoming successful out in Los Angeles and I am inclined to agree. Kalani was a standout in Season 2 of Abby's Ultimate Dance Competition and is now back as part of the ALDC for Season 5 of Dance Moms. She has her own YouTube channel, KalaniAddy with fellow dancer Addison Moffett. The pair have been posting silly videos since they created their channel in Sept. 2014. But I'm confident Kalani will score some fame beyond Abby Lee and YouTube. She was already on ABC Family's Bunheads before it was canceled.

According to the above Instagram photo posted by Abby, dancer Kendall has just received a record deal. Kendall also posted a photo of her video shoot on Instagram on Feb. 1. I'm sure her mom Jill is thrilled about the news — and proving Abby wrong that Kendall doesn't have what it takes to make it in Los Angeles.

Maddie's younger sister has also been making some serious career movies — not only as a dancer, but as a singer too. Under the name Mack Z, she released an album in 2014 with the song "It's a Girl Party." Mackenzie and Maddie were both recently interviewed by Billboard and the sisters have a limited edition clothing line through Mod Angel. So although Mackenzie may not be as famous as her big sister yet — she's no stranger to the spotlight.