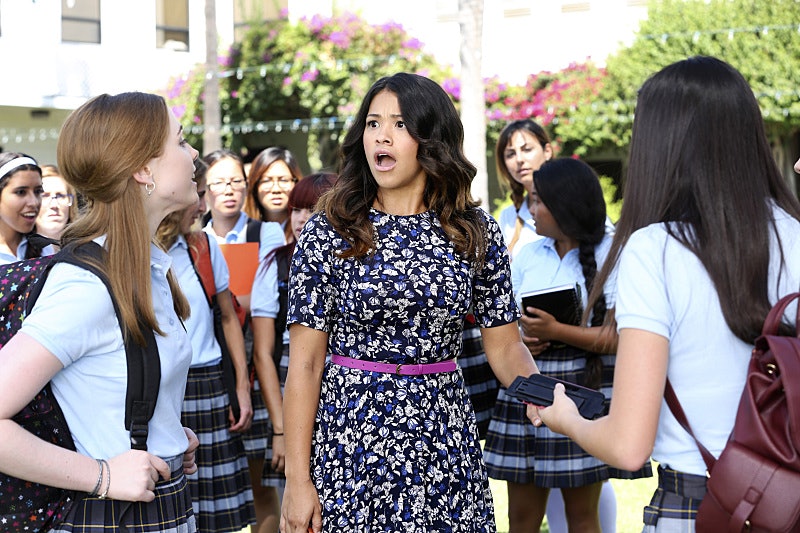 Although Jane the Virgin revolves around the birth of an unexpected baby, there was plenty of death going around in Chapter 12 that aired on Feb. 2. Rogelio was killed off of The Passions of Santos, Petra faked her death for a hot minute, and Rose killed Rafael's father Emilio — revealing that Rose is actually Sin Rostro. Oh snap! The evidence had been too neatly stacking up against Emilio, so once Michael had linked him to the plastic surgeon and Nadine was going to get a warrant for his arrest — I knew he couldn't be the faceless drug kingpin (Sin Rostro translates to "faceless"). But I hadn't planned on Rose being a double-crosser this whole time.

Of course, anyone who can cheat on her husband with his daughter (poor Luisa) has some seriously flawed morals, so I shouldn't have been so naive (aw, Jane would be proud of my naïveté though). The issue is that Rafael is now so completely convinced that his dad is Sin Rostro — and he's been protecting Rose who just killed his dad. Rose killed Emilio by having concrete poured on him, so who knows when his body will be revealed and some truth can start being discovered. Michael and Nadine will find it suspicious that Emilio has disappeared — right when they got a warrant for him. I'm hoping that Michael will use his detective skills to figure out that Rose is really the evil mastermind — and not go back to blaming Rafael (although Rafael seemed a bit shady in the Chapter 12 episode).

Now, this is Jane the Virgin after all, so I won't be shocked if Rose doesn't turn out to be Sin Rostro. But the narrator and onscreen typed words showed the connection between Rose's name and Sin Rostro (Sin Rose-tro ... get it?). And executive producer Jennie Urman had promised the identity of Sin Rostro would be revealed in Chapter 12, so as of right now, it really looks like Rose is the mysterious bad guy — and that Rafael and Luisa have no clue.