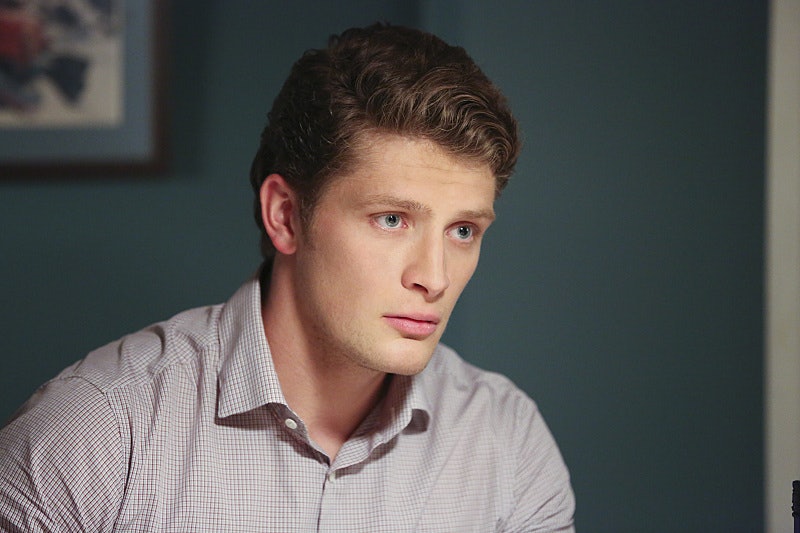 Although we didn't see much of Jane's ex-fiancée on "Chapter 11" of Jane the Virgin, I'm seriously fearing for Michael's job and more importantly — his life. So will Michael die on Jane the Virgin? In "Chapter 11," he followed Rafael and got himself beaten up and sent to the hospital. Michael is convinced that Rafael is either connected to — or actually is — faceless criminal Sin Rostro. But Rafael (with the help of his stepmother Rose) is trying to discover whether or not his own father Emilio is the mysterious drug dealer. Rafael went to the hotel's contractor to figure out why the one bathtub in the hotel has a hidden tunnel. Michael saw Rafael exchange money with the man who was supposed to know the answer to the secret tunnel — and wrongly assumed that Rafael was making a shady deal (well, I guess it was still kind of a shady deal — but not what Michael assumed).

When Michael approached the bathtub man, the bathtub man punched him, which led to Michael getting bruised ribs and a concussion — and ending up in the hospital the same night Jane was there (for getting in a car accident). His detective partner (and part-time lover — whom I do not trust at all) Nadine asked Michael if all of his snooping is because of Jane, He said no, but dude is clearly still in love with Jane (and how could he not be? She's so adorable) and is fixated on proving that Rafael is not a good for her.

To add insult to (literal) injury, Jane stopped by Michael's hospital room to check in on him — and tell him to stop waiting for her since she sees herself ending up with Rafael. Although it was harsh, I always respect Jane for being honest. It's better to let Michael know this than keep having him pine for her. Unfortunately, Nadine saw them talking and got jealous. And she reported to their boss that Michael had disobeyed orders.

Michael's obsession with trying to connect Rafael to Sin Rostro is going to get him killed — and now potentially make him lose his job. I'm so fearful for Michael's life (although I want Jane and Rafael together, Michael is usually a good guy and doesn't deserve a terrible fate — he's no Petra) because of what our hilarious narrator revealed in "Chapter 10." When Jane's mom Xo and Michael shared a heartfelt phone conversation where Michael said he'd never stop fighting for Jane, the narrator said, "And for as long as Michael lived, until he drew his very last breath, he never did."

Let's just hope Michael's last breath isn't coming up too soon — unless he keeps meddling with Rafael and Jane. Then I may have to change my mind.