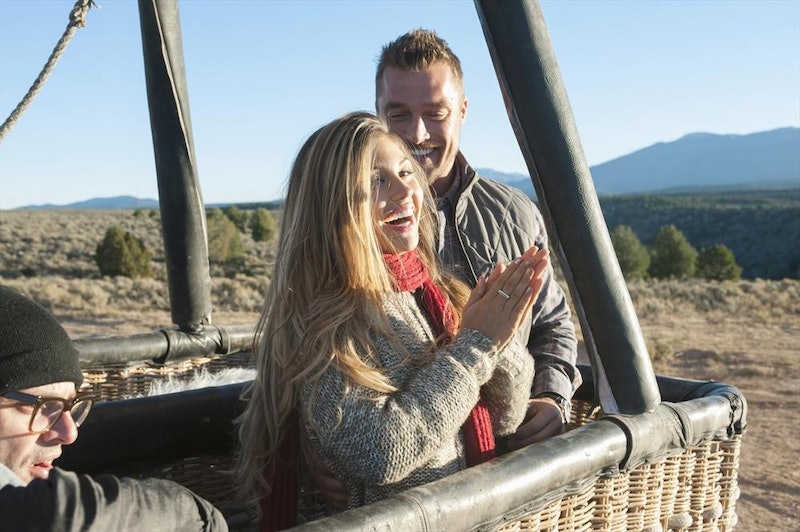 If there's one thing that makes me want to try and quit The Bachelor every year, it's the way it makes me ask really unnecessary questions about the women on the show. This year, it's whether or not bachelorette Britt showers. Yes, that is an actual topic of discussion this season. It first came about when Michelle Money spoiled it on The Bachelor live premiere special. I lambasted her for being a mean girl, but lo and behold, nice girl Carly goes and talks crap about Britt's hygiene habits in Week 5.

As Britt is getting ready for her date with Chris, she says "I might wash my hair," and Carly is taken aback. Look, Carly, as anyone who's ever listened intently to her hairdresser knows, washing your hair every day is a huge haircare no-no. That's why dry shampoo was invented. Carly doesn't stop telling on Britt though — that is the theme of Chris' season after all. She then says that Britt doesn't shower, or that she hasn't showered since she got to the show. Yes, that sounds gross. But let's think about this.

What's is more is that this all comes out in a bout of jealousy: Carly had a one-on-one that made her feel really special after being damaged by her last boyfriend, and now, here comes this other girl and she gets to feel special. Throw that in a Bachelor bubble without contact with the outside world, where your friends are your competitors, and you get some behavior that most folks probably aren't proud of when they get out of there. I have to assume that this rumor has a dose of jealousy and a dose of reality. The truth is somewhere in the middle.

After all, if Britt goes to sleep with a fresh face of makeup on just in case the producers surprise the women, she clearly cares about appearance and I'm assuming, by association, smell.

And if I'm wrong and homegirl hasn't showered in months, Chris seems pretty stoked on her either way, so maybe everyone should just put that in their pipes and smoke it.