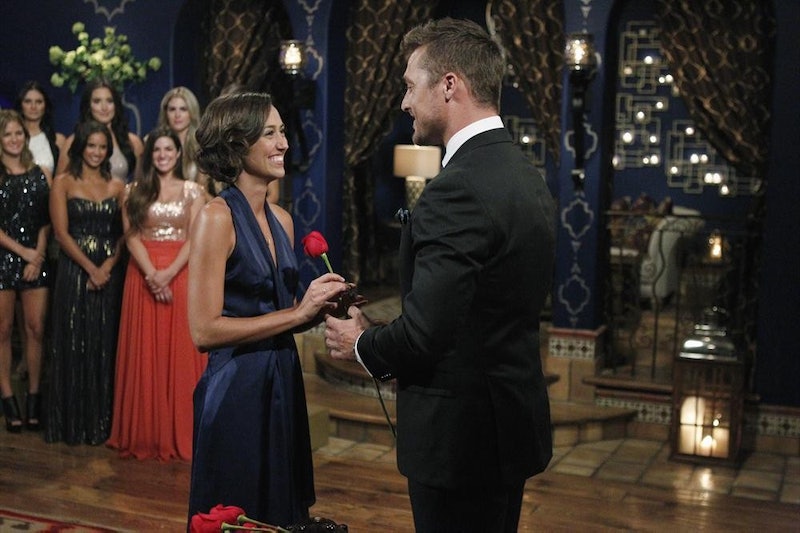 There was a lot of drama happening on this week's episode of The Bachelor , and somehow, most of it tied back to Kelsey. After keeping to herself for most of the season so far, last week, Kelsey announced her presence in a major way: By complaining endlessly about the group date to the lake, and then acting totally fake when Chris Soules asked her if she was having a good time. Monday night's episode, though, was her time to shine, and shine she did. Because this time, Kelsey is bringing out the big guns. She's kept it to herself so far, but Kelsey comes with a pretty sad story: Her husband, Sanderson, died of heart failure out of nowhere in May 2013. It's a heartbreaking story, but that's not the point. The point is that Kelsey decided to use her husband's story to get Chris' attention... and that's obviously not cool.

I definitely want to make myself clear here: People deal with grief in different ways, and far be it from me to judge someone for how they choose to cope with such a huge loss. However, the behavior Kelsey's exhibiting is just incredibly atypical of what you see when you picture a woman who has lost her husband. "Isn't my story amazing?" she said proudly. "It's tragic, but it's amazing. I love my story."

Like, what? She was so happy. This does not seem like a woman who is genuinely sharing an important story that affected her deeply with someone she cares about. She seems like someone who's just used her secret weapon and knows it. It was almost like she kept her story in her back pocket until she knew she might be eliminated and then pulled it out when she really needed it. The Bachelor is obviously a competition, but if this incident is what it looks like, then it was pretty low.

It doesn't help that she's seemed a little deluded this whole time, either. Kelsey spoke to the other girls as if Chris has already chosen her, and that her relationship with Chris is the only one that's actually real. I mean, she even announced that this show is also her story when she told the cameras to "Stay tuned Monday nights at 8 as the love story unfolds." Obviously, that's not the case.

Sorry, Kelsey, but this kind of behavior is exactly what makes people not root for you. Maybe take a page out of Whitney's book and try just being yourself.

More like this
What’s New On Netflix: Lana Condor’s Ghostly Comedy & A Sexy Reality Series
By Arya Roshanian
Here’s Everything Coming To & Leaving Netflix In July
By Grace Wehniainen
Paramount+ Wants To Take Over Your Netflix
By Sophie McEvoy
The Bachelorette’s James Adds Another Weird Occupation To The Franchise
By Kadin Burnett
Get Even More From Bustle — Sign Up For The Newsletter