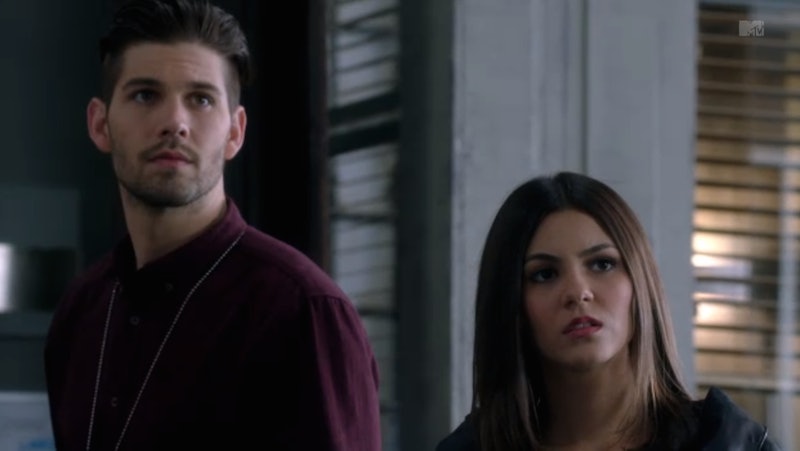 Alright Eye Candy fans. I know I said just a short while ago that it might be too early for Tommy and Lindy to start a romance together because of the Ben of it all. But I have to admit that it is really fun watching Tommy start to develop feelings for Lindy. In Monday night's episode "YOLO," Tommy was hesitant to put Lindy on a new case he was working involving the death of a young teenaged girl and her missing friends, and he reprimanded Lindy at quite a few turns throughout the investigation. But to me it really just seemed like Tommy's negative attitude and actions about Lindy's police cooperation and unconventional methods stemmed from his inherent need to protect her thanks to his growing affections.

When the new case featuring the urban legend The Stowaway began, Tommy definitely showed signs of restraint and annoyance that his Chief was allowing Lindy to join the case and help find out more information about the missing teens and the wild night out that resulted in one death. As the case progressed we saw Tommy getting more antsy and lecturing Lindy for her incessant hacking as well as her need to believe the best in their only suspect Max, the only teenager in the group who didn't go missing.

But there were moments in Tommy's eyes and his language that suggested his lectures and judgmental behavior came out of a place of concern and fondness for Lindy. At one point, Tommy tried to stop Lindy from making a stupid move in the case by recalling Ben's memory as he knew that was the only thing that could stop her dead in her tracks.

There were even a few brilliantly timed hints of future romance between the potential/probable couple. At one point, Lindy received a call from Jake, the Australian hunk of man who was recently cleared as a suspect in the Flirtual serial killer case, but Lindy ignored the call. Tommy looked relieved and almost triumphant that Lindy was still staying away from Jake, regardless of his non-killer status. Then later when Tommy and Lindy were searching for Max, they shared a cute flirtatious moment.

The most obvious showing of Tommy's growing affections for Lindy was at the very end of "YOLO." During the episode, Tommy had interviewed a psychic the teenagers visited during their wild night out and it turned out that she might actually have psychic visions. Tommy had her come back to the station under the guise of signing her testimony papers. But really he was hoping she could psychically tell if Lindy's sister Sarah was still alive.

Clearly Tommy is not going to stop working Sarah's case just as he promised Lindy. But it has to be more than just because he gave his word. The psychic saw the way Tommy looked at Lindy when she walked in the room and told him "Tell her. Tell her what you've always wanted to tell her. She could be the one you're looking for." Seriously, everyone can tell Tommy likes Lindy at this point, except Lindy and Tommy themselves. But maybe that's ok.

Sometimes the best part of watching any potential romance is the tension leading up to the union. I'm completely on board with this tension lasting for a while as it will give the characters time to get over the pain of losing Ben and it will give us viewers more of a desire to see them together and the greatest joy when they finally do.