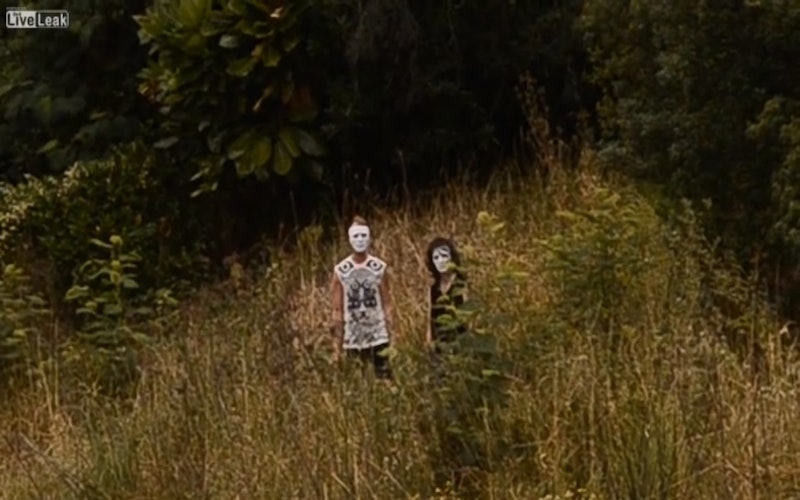 Now, masks are creepy enough as it is, but when you add in firearms it's basically the premise of a horror movie. That's the exact nightmare a group of students in New Zealand found themselves in when they stumbled upon a masked, armed couple in an Auckland park. Since the students were from a nearby film school and just so happened to be filming during the encounter, many are calling the whole thing a hoax. Still, hoax or not, wandering around in white Michael Myers-style masks and guns is never appropriate behavior.

A student film crew from the SAE Auckland school were hanging out in nearby Parnell Railway Station, trying to brainstorm ideas for their end-of-year project, when fate offered them an unforgettable subject. A couple appeared, wearing white masks and standing in the tall grass. At first the students figured that the two mysterious strangers were fellow classmates playing a prank, but then things got real when the masked duo started following them and the male allegedly "cocked his pistol."

The students posted a description of the encounter along with the video.

Initially, I thought that they were members of our school playing a prank, or something similar. We were all a bit confused, nervous, and we laughed, but found ourselves backing away, intimidated. Once they emerged and started to follow us we picked up the pace, splitting up and making our way back towards the main road.

One of the filmmakers, Chris Muir, told Vice:

I was totally confused. I had no clue what to think other than to back away.

It was funny at first but they (the masked pair) wouldn't say anything and just stared. We were half entertained and half scared because we had no idea what they were doing.

Some comments on the video suggested that the whole thing was clearly staged, pointing out how convenient it was that the students "happened" to have their film equipment on them. But Leyland Bottomley, campus manager for SAE Auckland, told Stuff, "It's not a hoax." Apparently, students often film near the railway station, which is just outside the school. And stumbling upon two people in masks and carrying guns was definitely not something they asked for. (Who would?!)

The students showed the footage to school staff, who then reported it to the police. Soon officers showed up, armed, and helicopters circled the area in search of the masked couple. Apparently, the law takes creepy masked individuals wielding guns — fake or real — as seriously as I do. Every city on earth should have a zero-tolerance policy for masked people, or maybe masks in general.

It turned out that someone else had already notified the police of the duo. Since the two incidents, the pair have come forward and turned themselves in to Auckland police, who confirmed that the couple had been carrying imitation weapons, but are not disclosing any additional details. Police spokesperson Noreen Hegarty told Vice:

I can't really go into detail about what they were doing but I doubt they'll be doing it again anytime soon.

The two creeps are believed to be the people behind the Twins of Atticus Facebook page, whose page includes cryptic posts about radical feminist Valerie Solanas and Kanye West. Yeah — the mystery at once deepens and disinterests. At the end of the day, it was probably just two art school students with a penchant for rebellion who fortuitously ran into a group of film school students who desperately needed a subject, and the whole entire episode could be titled "Bored Kids In Auckland, New Zealand."

But were the masks really necessary? I guess it was better than clown suits.