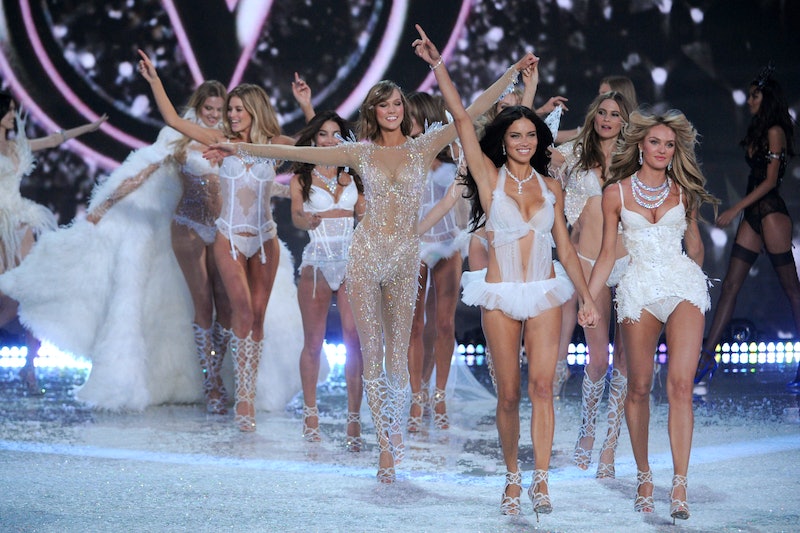 We all know that the Victoria's Secret Fashion Show is the crème de la crème of the modeling world. Or maybe being an angel in general is the aforementioned crème de la crème — just ask Karlie Kloss. The event is so popular — so coveted — that we don't even wait until its actual airing each year to cause a commotion. Though 2014's show isn't set to premiere until Tuesday, December 9th, we're already talking incessantly about Sophia Webster's stilettoed designs, Taylor Swift's Honorary Angel status and Ed Westwick's impromptu (and adorable) last-minute invite. And with good reason. I mean, Victoria's Secret is responsible for launching the careers of many a great model — from Heidi Klum to Adriana Lima to the lovely queen of the smize herself, Tyra Banks. So thank you social media for leaking all of that information out to us a whole week before the show aired. But despite being one glittery, pink-fueled cornucopia of glitz and glam and everything in between, the VS Fashion Show is not without its faults — amongst them, its lack of body diversity. And that goes for the whole brand, what with its [disastrous] "Perfect Body" campaign and all.

This year's VS runway models have been confirmed, and amongst them are Lily Donaldson, Stella Maxwell, Adriana Lima, Alessandra Ambrosio, Karlie Kloss and 42 other size 2 bombshells. And these women are glorious. As with all angels in the history of angels, they're the kind of beautiful that stops you in your tracks. Contrary to the belief that Victoria's Secret is the spokesperson for homogeneity, I actually think the lingerie giant has done wonders in including a variety of models on a racially global scale. From Brazil to Namibia to Argentina to South Africa, the angels have represented far more nations than a lot of the modeling world cares to do. But that being said, a look at this year's runway finalists will present you with a whole lot of blonde. And 47 pairs of equally-sized legs. Beautiful legs, of course — but after a while, the similarities start to get pretty boring.

And so, in an ideal world where size-inclusivity has been fulfilled, and Victoria's Secret catered to every woman, here are some other models I'd love to see walk that pink and glitzy runway — all of whom have proven their lingerie game at some point or another. I know, I know. It might never happen. VS, like many other brands, cares about advertising — and we don't exactly live in a time or place when advertising is meant to be realistic. But a gal can dream of fuller figures and curvaceous [more accurately representing of all women] beauties donning a Fantasy Bra, can't she?

I don't think anyone could question Tara's sheer grace. Can't you just imagine her in one of those dreamy, bedazzled brassieres?

I can't think of anyone more worthy of a two-million-dollar Fantasy Bra than the founder of #effyourbeautystandards herself.

No matter what this woman has been through, she's always managed to come out of things unscathed, with her smile and radiance in tact. Can the VS Fashion Show squeeze just one more blonde beauty in?

After killing it on the runway of New York Fashion Week this fall, I think we're all ready to see more of Denise. And the glam of the VS Fashion Show seems just the place to make it happen.

I don't know about you guys, but I firmly believe that when a person or corporation has built up a mass global following, they should use that platform to spread awareness of important issues. For a long time, I've felt that Victoria's Secret could be doing much more in aiding the betterment of body-positivity and body diversity. Here's hoping it happens someday. And if it does, I'm voting these women get their turn in the pink spotlight.