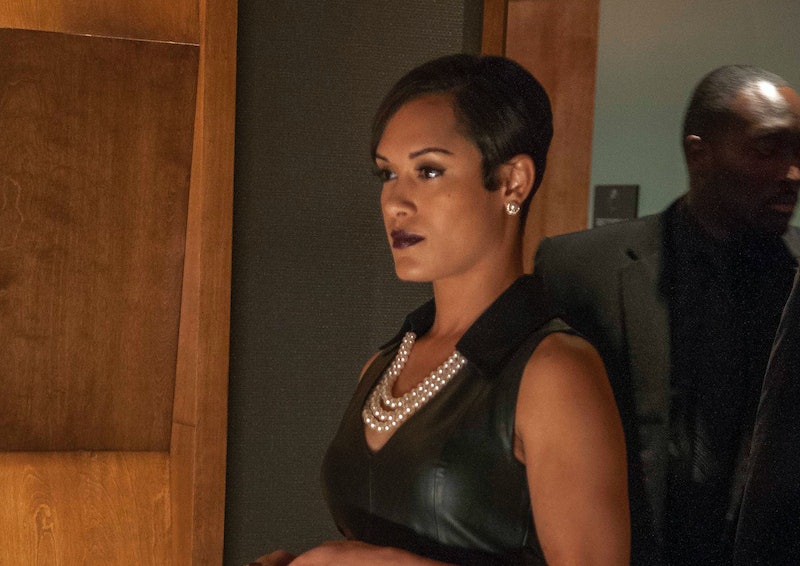 Though fans might be Team Cookie all day, everyday, on Empire, Anika Calhoun is a pretty good rival for her. Lucious Lyon's currently main-squeeze, as played by Grace Gealey, is also slowly edging her way into the chair of power at Empire Entertainment, which only makes it even greater when she and Cookie butt heads. Like a lot of the other characters on Fox's hit music soap opera, might we see Anika perform on Empire? While Anika can sing in real life, don't expect her to try and edge into the spotlight that way.

Gealey boasts a few different acting degrees, and singing comes with the territory. She's got a degree in theater arts, and a Master's in fine arts acting, not to brag or anything. She made her way to New York City and for a while starred in a few off-Broadway shows, and a production of the musical Rent. So does this mean we might see her showcase her pipes in an upcoming episode?

If you're hoping for an Anika and Hakeem duet, you'll be waiting a long time. As of right now, there are no plans for Anika to sing on the show. Gealey told SpoilerTV that it's simply because of the nature of her character. Anika's drive is for the company, not the spotlight. "Because of my role, you won't be seeing me sing any time soon," she explained. Of course, that might not mean we won't ever hear her sing. Now that Empire has been renewed for a second season, there will be even more opportunities for other characters to step into the spotlight alongside Hakeem and Jamal.

Gealey is clearly a star on the rise, but she hasn't gotten nearly enough media attention. The Internet appears to be completely devoid of all videos of her singing, especially in Rent, which is a shame. However, if you've ever wanted to watch an episode of Cayman Daybreak , here is your chance to catch an interview with Grace in 2012 where she talks in depth about her love for all forms of acting.

Taking into account Empire's continued literal climb to the top (it becomes more and more popular every single week!), there might already be plans in the works to get Anika singing. Wouldn't that really ruffle all of Cookie's feathers, if suddenly Lucious is recording a new song, and has Anika sing on the track? Can you IMAGINE what kind of reaction our Cookie would have? None of us will want to be near here when she explodes — but we'll definitely be watching.

More like this
Grammys Host Trevor Noah Made Adele's Dream Of Meeting The Rock Come True
By Brad Witter
Linda Ronstadt’s “Long Long Time” Plays A Pivotal Role In The Last Of Us
By Brad Witter
Taylor Swift Visited The 'Glee' Set For This Bizarre Season 5 Episode
By Grace Wehniainen
This 'Emily In Paris' x Blackpink Crossover Is Beyond Iconic
By El Hunt
Get Even More From Bustle — Sign Up For The Newsletter
From hair trends to relationship advice, our daily newsletter has everything you need to sound like a person who’s on TikTok, even if you aren’t.