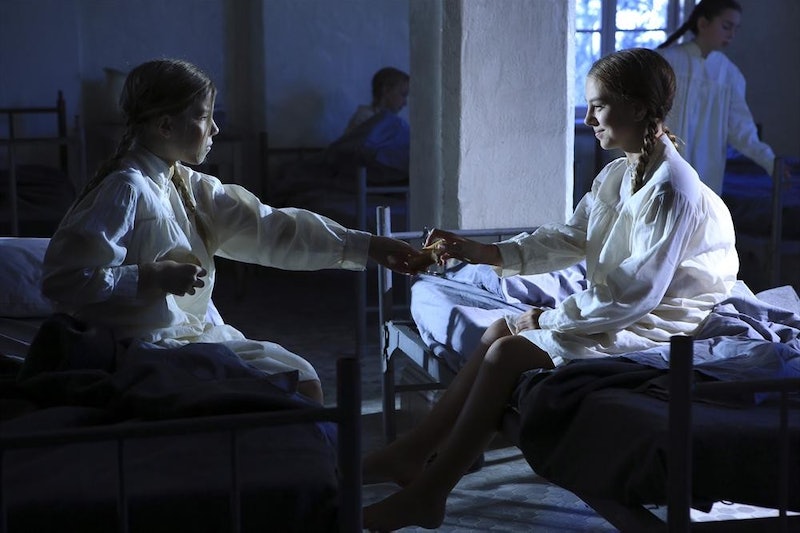 I'm starting to wonder if Agent Carter isn't also a prequel to Netflix's House of Cards. Dottie Underwood shares a name and a shady agenda with Kevin Spacey's character. What is Dottie after on Agent Carter ? Her character just got way more frightening. After taking out a bad guy last week, this week's episode opened with a flashback to Dottie's upbringing in the Red Room Academy, where she became a predecessor to the Black Widow. The little girls in the school were handcuffed to their beds, brainwashed by Disney cartoons (which also helped them perfect a perky American accent), had to sneak bread, and then engaged in deadly training activities. Trust me, I'm over wanting Peggy and Dottie to become friends ever since I watched her snap a friend's neck in that flashback. This is so much darker than I ever expected Agent Carter to be, and I love it.

Back in the present, Dottie easily stole Peggy Carter's apartment keys, snuck into her room, and got to snooping. Thank Nick Fury's eyepatch that she didn't find the vial of Steve Rogers' blood hidden in the wall. However, Dottie did find something mysterious. Hidden in a jewelry box within a secret compartment was a stack of photographs from the Second World War. The one she kept was a photo of a box — was that the Kree we saw in an Agents of S.H.I.E.L.D. flashback? Presuming that Dottie is working with Leviathan, what does the organization know about, or want with, the blue aliens?

Then it just got weird. Before leaving the bedroom, Dottie picked up Peggy's photo of scrawny Steve Rogers, looked into the mirror, and said "I'm Peggy Carter" in an imitation British accent. Is she trying to Single White Female her? What is going on? Is Dottie some type of Captain America fangirl in addition to being a Black Widow Agent? She seemed fascinated with Peggy "sounding just like Captain America" earlier in the episode too. Is she planning to impersonate her? Since the SSR is looking for a blonde woman who's working with Howard Stark, that could come in handy. However, and again this is my wishful thinking doing the talking, but maybe she's been talking to Bucky Barnes?

At the end of the episode, Dottie habitually handcuffed herself to the bed just like she'd done in the Red Room Academy. Here's my question — is this still her protocol or is it the only way she knows how to fall asleep?