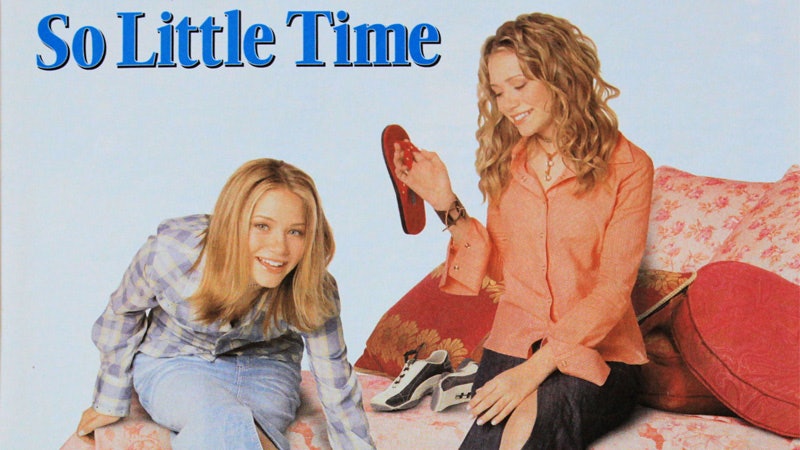 It’s been at least a decade since I last wore a duster or a pair of platform foam sandals, but after revisiting the first episode of Mary-Kate and Ashley Olsen situation comedy So Little Time, I kind of want incorporate those clothing items back into my wardrobe. MK and Ash just make early ‘00s fashion look so cool! Yes, I re-watched the So Little Time pilot. (Why? I don't know, just seemed like it'd be a fun time. I wasn't wrong. I had a blast.) It was the first time I'd watched it since the short-lived show premiered on Fox Family Channel (ah, the age of Fox Family Channel) on June 2, 2001. While I like to think I have a terrific memory for this sort of thing ("this sort of thing" = tween sitcoms from the aughts), by minute two of the episode, it was very clear that I didn't remember much about the show.

Before I fired up the pilot, I made sure to jot down the details I could recall:

As I watched, I wrote down everything I didn't remember. The list is long. Here are the highlights:

While we're on the subject of Larry Slotnick, HOLY CRIPES LARRY SLOTNICK. I wouldn't say I forgot about the character of Larry. That would suggest I unintentionally let the memory of Larry slip away. Instead, I deliberately pushed the character out of my mind. But now he is back in my mind. I'm coping as best I can.

Larry is a teen boy who has what some might call an unhealthy obsession with Riley. He's a live wire who makes Gotham's Edward Nigma seem like a chill dude. The other SLT characters think Larry's nothing more than a socially awkward kid with a big crush, and that's the extent of their negative feelings about Larry. I seem to be the only one who thinks Larry is a red flag personified.

Here are some of the noteworthy things Larry "Red Flag" Slotnick does in the pilot:

That last one is the most telling. He acknowledges he "lost it over Riley again." So not only does Larry cross lots of lines, but he knows he does it.

Larry is not my favorite. Needless to say, I do not ship Larry and Riley.

I couldn't remember what happens to Larry over the course of the one-season series, but I needed the answer, STAT. I wasn't about to plow through 25 more episodes in a sitting (I had so little time, but too many eps to watch). To the Google I go!

Before I looked up Larry spoilers online, I made a few predictions:

GUESS 1: He sneaks into the Carlson house, collects Riley's hair from her hairbrush, and creates a hair doll.GUESS 2: He builds and moves into a treehouse directly across from Riley and Chloe's windows.GUESS 3: He gives Riley a baby simulator doll for her birthday and says it's so she can practice for their future.GUESS 4: He convinces Riley to ride a Ferris wheel with him. He pays the ride operator to stop the wheel once his and Riley's cart is at the very top. And then, he tells Riley the wheel won't start up again until she says she loves him. (It's the terrifying version of that Marissa/Ryan moment from The O.C.)GUESS 5: He gets a tattoo on his back. It's Riley's face plus the lyrics to "I Will Always Love You".GUESS 6: He moves to Gotham and becomes a super villain named Red Flag.

What actually happens: According to the So Little Time Wiki, Riley and Larry smooch at least once AND it looks like Riley develops a crush on Larry.

Oh. Huh. OK, then. Maybe he calms down after a few episodes and becomes totally endearing? OR MAYBE! He learns dark magic, concocts a love potion, and dumps said potion in Riley's Jamba Juice. I'm going with the latter.