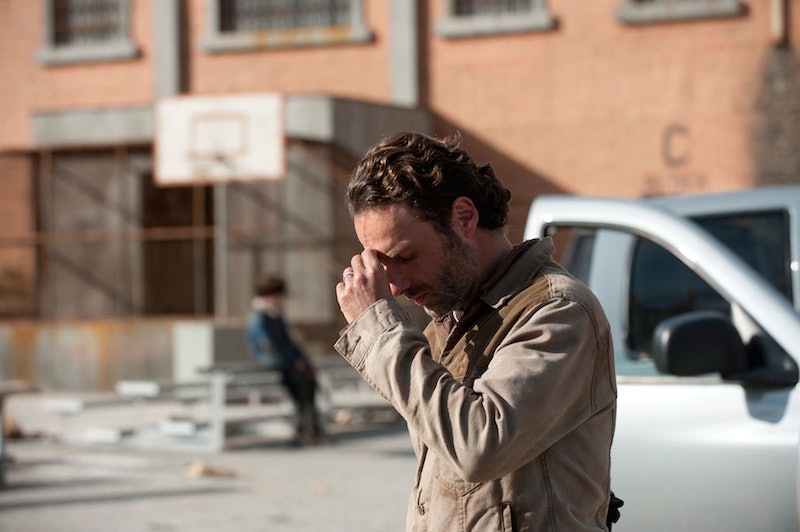 At this point, I expect to be stressed out by every minute of The Walking Dead; however, weirdly enough, the first 2 minutes of the TWD midseason premiere that were just released online are uncharacteristically mellow and beautifully shot — and in a way, that's almost more jarring, mostly because it's a far cry from the survival-heavy, intense trailers we've seen from Rick Grimes and the gang thus far.

However, there is still a lot of speculating to be done before TWD returns on Sunday night. You can't let your guard down on this show, even when the pace has slowed. In the opening scenes, we see Father Gabriel presiding over Beth's funeral: He is reading from Corinthians in the Bible. Maggie is sobbing. Noah is devastated. I'm hugging a pillow.

We then flash to the group escaping the hospital, guns blazing. Later, we see the group decide to go to Richmond, Virginia. That's where Noah's family is, and it's what Beth would want them to do as she was planning on joining Noah there. So now we know where the group is going next.

I think that artsier tone of the scenes is a fitting tribute to the departed Beth Greene. It may be the zombie apocalypse, but one should stop and take note of a willow tree, and a sunset — at least once in a while. Even the wildlife growing through an abandoned human skeleton in the woods has a sort of hopeful beauty to it. Watch the new footage below.

Pretty, isn't it? Here are the burning questions that this new footage raises:

What Are They Digging?

Presumably, the opening shots are of someone digging a grave for Beth. Someone hold me? It's still too soon. However, it could be part of a flashback; this is very, very nitpicky of me, but in many parts of that area of the South, the soil is not brown. It is a delightful red clay instead. That's just something to think about. Also, is this scene present-day?

Whose House Is That?

The flashbacks show a framed picture of a house in another unidentified house. The frame is on a table with a figurine of Dr. Jekyll/Mr. Hyde, and a globe. The literary reference spooks me most of all, though — haven't we had enough doctors on this show?

Who Are These Kids?

Are they siblings? Friends? Is that Noah? Is this a Noah flashback? In a different photo, the boys are wearing matching outfits. Does Noah have a twin brother, and would this have anything to do with the Jekyll & Hyde reference I spotted earlier? It wouldn't be The Walking Dead if one question didn't lead to a handful more.

Why Is A Baby Crying?

When Noah and Rick are talking about Richmond, we hear a baby crying. You would assume that it's Baby Judith Grimes, but we don't see "Lil' Ass Kicker" and the sound is definitely coming from a different place or time.

Eugene is up and about, but where is the man he betrayed most of all? Granted, we also didn't see Carl either, and only heard Michonne in the preview. But Abraham's absence is conspicuous. Did he leave the group? We saw ol' Abe in the trailer for the second half of the season, so we know he's around at some point. I wonder what's up.

What Is This? Why Is This?

You know how scary children are in horror movies? I'm having a similar feeling about this chalk drawing of the sun. TOO OMINOUS.