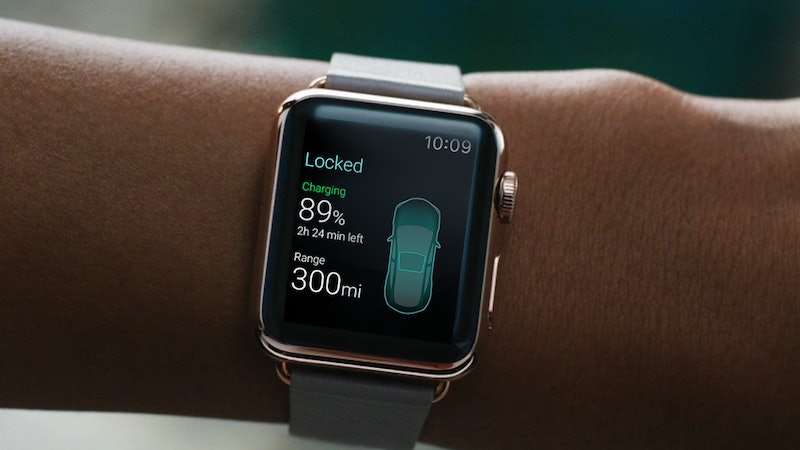 If you're the owner of a luxury Tesla electric car that just isn't fulfilling your desire for cutting-edge technology, look no further than a new app for the Apple Watch. Never mind that the Apple Watch hasn't been released yet — app developers are already preparing for its launch. Software company Eleks Labs has created an Apple Watch app that lets you control your Tesla car from your wrist.

According to Eleks Labs, the app "perfectly lines up with the concept of smart watches." With the app — which does not have a working name yet — drivers can open and close car doors, switch on the headlights, beep the horn, change the temperature inside the car, and see information about the car's location, condition, and battery life. All these functions will be available on six different screens, developed with WatchKit, a software development kit for enterprising Apple fans.

Though the Eleks developers have succeeded in creating an Apple watch app that will be able to easily control several important functions of a Tesla car, product manager Markiyan Matseh's blog post about the app makes it sound as if they may have had larger aspirations in mind with the app:

Although the opportunities seem pretty huge with Apple Watch, unfortunately, the current capabilities of the emulator-only development don’t match the expectations set after the keynote. We can now confidently say that creating anything really necessary and fully functional for Apple Watch with the current SDK version is very, very difficult.

Don't get too excited; Eleks doesn't have an exclusive Apple Watch — the app is working not on an actual Apple Watch, but on an emulator. The app is not officially affiliated with Tesla or Apple.

Though the Eleks driving buddy might not be officially on the roster of Apple Watch apps, here are a few of the ones that Apple does promise to provide:

Will we eventually be able to control everything with our new Apple Watches, including the steering wheels of our electric cars? Only time will tell.