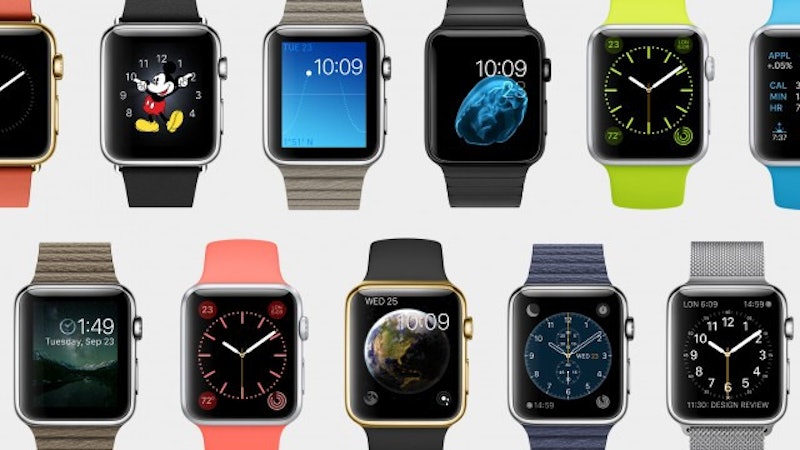 Unless you've been living under a rock, you probably heard the little announcement Apple made this week about its latest tech products. Sure, there's a new iPhone, but what really got everyone talking was the Apple Watch — the company's answer to the wearable tech trend that's taking over the tech and fashion industries.

This isn't just an iPhone on your wrist. And, smart watches aren't exactly a new idea. But, the Apple Watch goes above and beyond your average fitness tracker (and, well, pretty much any other wearable tech item) with a notifications center, an activity tracker, a health monitoring app, GPS, sophisticated motion sensors, a built-in heart rate monitor, and plenty of new apps designed to help you set, track, and accomplish fitness goals.

Check out eight reasons that juuuust might help you justify that $350 price tag when the Apple Watch hits shelves next year.

It Tracks All Your Body Movement

Fitness trackers like the Fitbit (even when cased in Tory Burch) log steps you take, distance traveled, and calories burned, but the Apple Watch doesn't stop there — its built-in activity app measures three different aspects of movement, such as how often you go from sitting to standing, how many calories you burn, and how much exercise you've done. It also has a heart rate sensor, so you can tell how much energy you're actually expending during all that movement. (The only comparable health tracker seems to be the Basis watch.)

The one thing it doesn't track? Sleep.

It Reminds You to Get Moving

If you've been sedentary for too long, it prompts you to get off your butt.

One of the biggest problems people have today: sitting. But, when you're stuck at your desk for six-plus hours a day, it's hard to remember to get up and move. The Apple Watch senses when you stand up and sit down throughout the day. If you've been sedentary for too long, it prompts you to get off your butt and take a walk (a notification system the Jawbone UP24 also uses).

It Uses GPS to Track Movement

The GPS chip on the phone records your movements, and the watch pulls that data off the phone

Tapping into GPS allows the Apple Watch to deliver more accurate readings for total movement and calories burned. The only drawback is it needs to sync with your phone to function — the GPS chip on the phone records your movements, and the watch pulls that data off the phone. The point being, if you're trying to track a long-distance run, you're still going to need to lug your phone around with you — or invest in a GPS-driven Garmin sports watch.

You Can Stream Your Music

Gone are the days where you have to wear unsightly velcro arm bands or stick your iPod into your sports bra while working out (just me?). The Apple Watch (which can also receive texts, emails, and emojis) can play music right through the device on your wrist.

None of the other popular fitness trackers offer that perk right now — although, again, you need to have your iPhone nearby in order to sync your music library (so a run sans iPod or iPhone is probably still out of the question).

It Helps You Set Goals

Besides the activity tracker, Apple is also introducing a dedicated workout app. It lets you choose from popular exercises like walking, running, or cycling, then set a goal, like number of calories you want to burn or how far you want to go.

Most fitness trackers don't really capture the more vigorous activity you do in the gym.

Not only will the app track you, it gives you stats such as time, distance, calories, and pace (and gives you a heads up when you're halfway to your goal). Surprisingly, most fitness trackers — like the super-popular Jawbone and Fitbit — don't really capture the more vigorous activity you do in the gym or during a workout, but just log the steps you take.

It Helps You Beat Your Goals

Because the Apple Watch is tracking all your activity, it gets to know you and what you're capable of. Each time you use it, it will suggest personalized goals based on your workout history. Say your last run was 30 minutes — the next time you open the app, it will suggest an increased length of time for your workout. The hardest part of any workout is motivating yourself to go further; the Apple Watch does that for you.

It Shows Your Accomplishments in Real-Time

Trackers such as the Misfit Shine or Nike FuelBand rely on apps to display your progress. (Nike is working to sync its technology with Apple since the company stopped producing hardware).

The Apple Watch, similar to Samsung Gear Fit smartwatches, shows everything it is tracking on the screen, which makes it easier to keep your performance and goals front-of-mind during your workout.

It Gives You Perspective on Your Performance

If all the in-the-moment tracking isn't enough for you, you can download the Apple Watch companion app called Fitness. It shows you all activity by the day, week, or month (so you can see when you performed best and when you may have been slacking off).

One super important note: You need an iPhone 5 or newer to connect the Apple Watch to the Internet. Guess it's time to cash in on those upgrades, people.