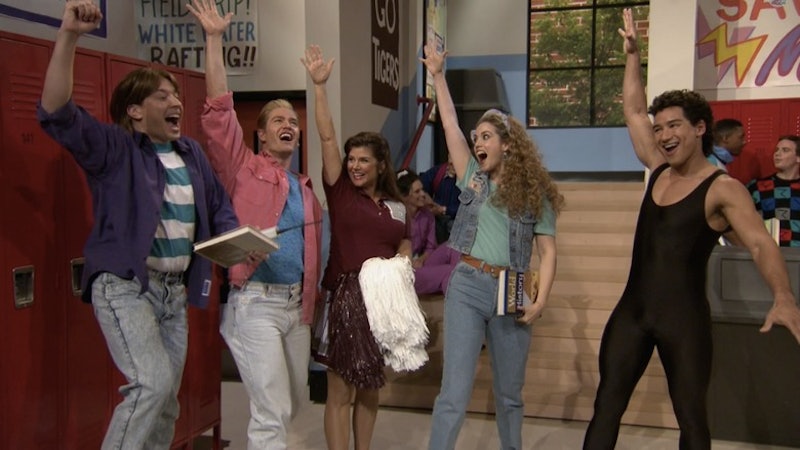 By now, you've probably heard that the cast of Saved by the Bell reunited on The Tonight Show Wednesday night, and the get-together was just as great as you'd expect: everyone (including Jimmy Fallon) was in character, the fashion was perfectly early '90s, and everything from the return of Slater's dimples to the playing of that crazy theme song was in tribute to the beloved show. The only disappointment was that Screech and Lisa weren't there, but hey, when Jimmy Fallon stages an eight-minute, hilariously accurate Saved by the Bell reunion on his show, we probably shouldn't quibble over minor details.

What we should do is re-watch this video over and over again, because as you might've figured when the words "Saved the Bell reunion" and "Jimmy Fallon" were placed in the same sentence, it is epic. From the hair to the cell phones to to the dancing (!), the reunion gets everything right — and for fans who've waited years to see the stars of their favorite show come together, it might just be too much to handle. Here's how to deal with your likely tumultuous emotions, from surprise to happiness to "holy crap, I can't believe this is happening:"

When You First Realized What Was Happening

And When You Saw How Much of the Cast Was There

When Someone Said, "Maybe You Should Watch Something Else"

When Your "Friend" Said "Why Do You Even Care About This, Anyway?"

And Then When Someone Suggested You Should Stop Freaking Out Already

When You Realized How Nostalgic You Actually Were for the Show

When You Heard Someone Younger Say, "I've Never Even Heard of This!"

When Someone Else Said, "What's the Big Deal About This Show Anyway?"

And When You Tried to Explain, They Just Shrugged And Said, "It Sounds Stupid"

HATERS GONNA HATE. Shrug 'em off and go re-watch the video again and again, because as real '90s kids know, it's the best.