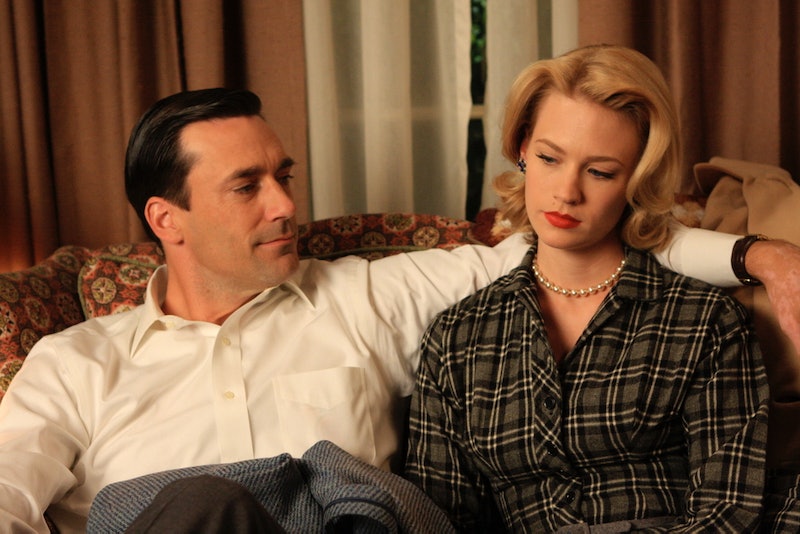 Every relationship is different, so it's impossible to say that there is a prescribed moment when you know you're supposed to break up with someone. Feelings like that are usually gradual, and evolve and take shape over time. A hundred little things will happen before you know in your gut that it's the right thing to do, and odds are that by then, the realization won't come in one fell swoop — it might be so long overdue that you aren't surprised by it at all.

I'm not saying that this makes it easy to do the actual breaking up, because breaking up, regardless of the circumstances, is never a simple or painless thing. No matter how long you have been in a relationship with someone, there is some kind of history and a degree of trust between the two of you that will inevitably be altered forever, whether or not you decide to stay friends. But at some point, even the pain of breaking up is nothing compared to the long, slow strain of staying in a relationship that just plain isn't working anymore. You owe it to yourself — and to the other person — to give yourselves a chance to find a relationship that really does feel the way it's supposed to. Because if you are feeling any of these things, odds are, you should have broken up already by now:

Let's be honest: We live in a time in which actual phone-talking with people we see on a regular basis has started to feel like a chore. Even as a person who enjoys talking on the phone, I'll occasionally get a call from a friend and be like, "Whoa, where's the fire?!" because they didn't text me instead. But significant others are different. Interacting with them, even on the phone, shouldn't feel like a huge hardship.

When you are in a mutually supportive and healthy relationship, you get good news and are hitting speed dial to them in almost the same breath. If you don't immediately feel like sharing your good news with your significant other, something fishy is up, whether or not you've come to terms with it yet.

You pick fights over stupid things

All couples fight, but there's an important distinction between the fights that are actually worth fighting about and the ones that only exist as a product of a disconnect between the two of you, or which arise out of projected tension from another area of your relationship. When you get to a point in a relationship when you feel the need to get a rise out of each other for no reason, it means something else very essential is missing. It's also a good sign that you aren't communicating nearly as effectively as you need to.

You don't look forward to sex

As fun as it is, sex is also an incredibly intimate and personal thing that you and a partner share with each other, and there is nothing more depressing than going through the motions of it with someone when you are not feeling that intimacy or even enjoying the physical parts of being with them anymore.

You don’t mean it when you apologize

When you start using "I'm sorry" as a Band-Aid for all your problems, instead of taking the long way around by actually discussing them and working them out, it means that you are less invested in the relationship. It might be past time to start asking why that is.

You're embarrassed by them

Would you ever want to be in a relationship with someone who felt embarrassed to be around you in public, or was hesitant to introduce you to their family and friends? Hell to the no. And neither would the person you're dating. If you feel anything but proud of the person you are dating, then you are both settling for less than what you deserve.

You frequently fantasize about other people

You can't turn off the part of your brain that occasionally fantasizes outside of your relationship (if you're me, that would mean never reading another book again), but you should know yourself well enough to know when it has reached a level that you can't brush off anymore. There is a huge difference between a casual daydream and a fixation that might indicate a serious level of dissatisfaction in your current relationship.

They annoy you and you can't even explain why

They've done nothing wrong, but all of a sudden you find yourself irritated with them, or are even indirectly blaming them for problems in your life that have nothing to do with them. They become a grating presence to you, and you become an even worse grating presence to them, because they are constantly on pins and needles trying to figure out what they did to bother you.

You don't fully trust them to be faithful

If there is even a tiny seed of doubt in your mind that they might seize an opportunity with someone if they knew they could get away with it, that tiny seed will fester and grow bigger over time, until the relationship is either wrecked by the mistrust or wrecked by the cheating your gut saw coming a hundred miles away. Whether or not you are wrong to mistrust them, the fact that you are feeling that way may be a sign that you need to move on.

(To be fair, it could also be a sign that you have an issue with trust and insecurity that has nothing to do with this particular relationship. Maybe take a long moment to pause and figure out exactly where your feelings of mistrust are coming from. There's no use dumping one relationship if the cause are your own issues that you'll only drag to the next one.)

First impressions are real rough sauce, so you can't really let it shake your confidence in someone if your friends and family don't like the person you're dating right off the bat. Hell, maybe you didn't even like them the first time you met them, but then they grew on you over time. But if it has been a few months, or even years, and the important people in your life still haven't warmed up to the idea of your significant other, maybe it's time to take a step outside of your relationship to try to understand what they're seeing that you don't.

Abuse comes in all kinds: It can be as blatant as someone hitting you or as subtle as someone making comments every now and then that, when combined, erode your sense of safety and well-being. Regardless of what form the behavior takes, if there is any part of you that has felt intimidated or threatened by the person you are dating, you shouldn't allow yourself to feel compromised for a second longer.

Another important consideration turns the tables completely: Sometimes, you are not the one who feels threatened. Sometimes you are the one berating another person's self-esteem on a daily basis, or even raising a hand to them, which is wrong regardless of your gender or relationship dynamic. If you feel like you want to hurt them or if you already have, you owe it to both of you to immediately remove yourself from the situation and get to work on figuring out what the hell is going on with you.

Every couple has "that thing" in their past: Someone did something stupid, or some obstacle was overcome, and you forgave each other and moved past it. You're totally past it. That is, until you're not. If one of you is still holding something over the other one's head like a bargaining chip, you're never going to truly be on even ground with each other, and neither of you deserves that.

A lot of the time, the person you need to break up with can sense it coming before you do, and they are every bit as uneasy as you are, if not more so. They'll use every opportunity they can to try to dissect the problem, even if you both have a feeling you already know what it is.

You have used breaking up as an ultimatum in the past

You picture your hypothetical future without them there

This is another huge alarm bell, and it can sneak up on you when you aren't expecting it. For instance, if you have plans or goals that take you away from where you're living now, and you are uncomfortable with the idea of the person you are dating changing their life around to follow you even if they were perfectly willing to do so, that's when you know that whatever goals you have are probably more long-lasting than the relationship will be.

You just feel like it's wrong in your gut

Sometimes there just plain isn't a reason, but when you know, you know. You have to be able to listen to that voice in your head, because it is older and wiser and knows more than you do, even if you don't understand it all the time.