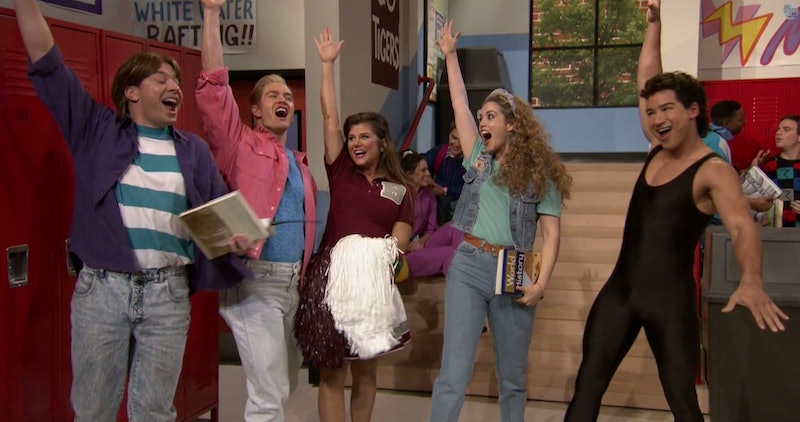 If you went to bed early on Wednesday night, you missed out on something wonderful while you were sleeping: Jimmy Fallon managed to get the Saved By The Bell cast back together for an eight-minute reunion sketch on The Tonight Show, and it was one of the best things that has ever happened to television. Zack, Kelly, Slater, Jessie, and even Mr. Belding were all there, and even though Screech and Lisa were noticeably absent, it was phenomenal. Inside jokes were made, early '90s dance moves were dusted off and brought back out, and most importantly, it gave us a solid visual of what the cast would look like if they were perpetually stuck in Bayside High School (the way it should be). And watching this all go down, I couldn't help but think, damn, those are some good genes. The Saved By The Bell cast hasn't aged at all!

Of course, they all look a little older, and like real grown ups, but I'm willing to bet these guys have been sipping from a secret, sitcom-stars-only version of the fountain of youth. What really makes this obvious is putting pictures of the cast then and now side by side. Seriously. It's freaky.

For a 40-year-old, Mark-Paul Gosselaar looks suspiciously like his teenage self. Maybe it's the clothes and the hair, but this guy only improves with age. Well done, sir.

Being that Mario Lopez is everywhere these days, it's already obvious that whatever skincare regimen he's using is working. I would say he's definitely the least touched by time out of the entire cast. And the muscles? Those still exist, too.

Dear Elizabeth Berkley: tell me what your secret is so that I can do it, too.

Growing up, I always wanted to be Kelly, and I don't think that's changed. I will forever be jealous of Tiffani-Amber Thiessen and how gorgeous she is. I am ashamed to say that even in high school — well into the early 2000s and more than 10 years after Saved By The Bell went off the air — I was still cutting up my sweatshirts as a way to pay homage to her.

OK, so maybe Dennis Haskins aged a little. But give the man a break! He's 64!

More like this
These 'Criminal Minds' Throwback Photos Show The Cast’s 17-Year Evolution
By Grace Wehniainen
'Neighbours' Is Officially Coming Back & Fans Are Going *Wild*
By Sam Ramsden
The First Trailer For 'That '90s Show' Includes So Many Nods To The Original Series
By Jack Irvin, Alyssa Lapid and Grace Wehniainen
'Gilmore Girls’ Lauren Graham Just Revived Our Hopes For A New Reunion
By El Hunt
Get Even More From Bustle — Sign Up For The Newsletter