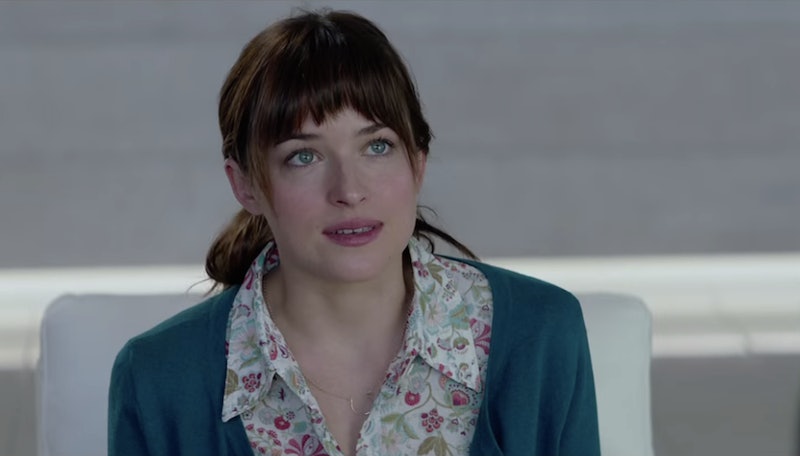 Ah, Fifty Shades Of Grey. The film of the book is a phenomenon that has been consuming a pretty heavy portion of my thoughts in the last month alone, partially because the release date draws ever closer and partially because, despite the fact that Jamie Dornan's penis won't be in the movie, it still sounds like it's going to be an amazingly fun time. But there are some people, like myself, who are excited for the film, but weren't that impressed with the novel itself. I mean, say what you want about those steamy quotes from Fifty Shades of Grey the book, but there were some quotes that were more silly (or scary) than they were steamy. In fact, some quotes were so ridiculous and over-the-top that I'm already hoping they get rewritten for the film.

We've all already heard by now that director Sam Taylor-Johnson and author E. L. James had a lot of tension on set of the movie, because the latter had a vision that was different from the former's. However, I'm sure the two of them together have crafted a film that all of us will enjoy again and again (and again and again) as soon as it hits theaters. It's just that, like. When that movie does come out, I'm really really hoping these nine lines aren't in it.

1. "Well, if you were mine, you wouldn’t be able to sit down for a week after the stunt you pulled yesterday."

The "stunt she pulled yesterday" was going out with her friends and having her first drink. I mean, I guess you could call that a stunt, but in college that's called Friday Nights or Thirsty Thursdays. Either way, I hope this one gets a rewrite just because I'd love it if movie Christian didn't threaten to spank Ana for being a college student.

2. "One minute he rebuffs me, the next he sends me fourteen-thousand-dollar books, then he tracks me like a stalker... He’s not a dark knight at all, but a white knight in shining, dazzling armor – a classic romantic hero – Sir Gawain or Lancelot."

Are we in Twilight or in Fifty Shades of Grey? Much like Bella was totally okay with the revelation that Edward snuck into her bedroom at night to watch her sleep before they had their first conversation, so too was Ana totally okay with the fact that Christian tracked her cell phone after she drunk dialed him. To me, the danger she was in when he found her doesn't negate the stalking, but, at the very least, I hope the movie spaces out her realization that Christian is a stalker from her realization that he is a white knight. Together, they don't really mesh.

I'm sorry to those people who found this particular line to be hot, because, for me, it killed the mood completely. Come on, Christian. You can dirty talk better than that.

This is the most common way of saying goodbye employed by Christian's brother, Elliot, and it makes him sound like he is about 6 years old. I hope the movie uses a better dudebro saying than "Laters."

7. "For the first time, I notice he has a few random and faint small, round scars dotted around his chest. Chicken pox? Measles? I think absently."

I just want it on record that Ana is thinking this in the middle of having sex with Christian. Please, please, please let this particular piece of inner monologue have been cut from the final film. Measles are not sexy.

Actual email from Christian Grey to Ana Steele. The fact that it was buried in the midst of a very long essay about how he feels about her makes it even worse. How about we not?

This was how Christian chose to tie off his first sexual introduction of Ana to the wild, world of "singular" tastes and, as above, it kind of killed the mood completely. Maybe I just need to hear it growled in Jamie Dornan's voice or maybe they just need to skip this line in the film entirely. Either way, I think the sex itself was a good enough introduction without this line, thank you.